Will Butler on life with England U20s and Worcester 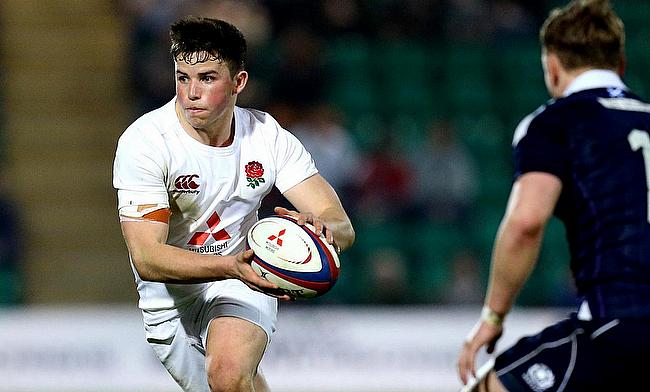 Will Butler in action for England U20s
©Worcester Warriors Twitter

Ben Te'o committed to fulfill his contract with Worcester Warriors
Italy's Seb Negri: 'I do have to pinch myself because it is a dream come true'
England U20 announce Elite Player Squad ahead of 2017/18 season
England reach U20 Championship final after hard fought win over South Africa

Starting out at his local club Ledbury, Will Butler wasn’t always keen on the sport that now earns him a living:

“I was probably around six or seven. My elder brother played and Dad was always keen to get all of us playing, so I went down and didn’t really enjoy my first couple of times down there.”

Now an England under 20s player and captain of the Worcester Cavaliers, Worcester’s A-League side, Butler stuck with rugby and is reaping the rewards. Winning an under 20s Six Nations Grand-Slam in 2017 with the likes of Nick Isiekwe, Ben Curry, Zach Mercer and Joe Cokanasiga is right up there.

Your England U20 side to face Scotland U20 on Friday night ??

However, Butler still remembers his first call-up to international duty: “It’s pretty mad. It was a bit of a shock to be involved. I had just come back from injury, so I wasn’t quite expecting to get back in so quickly.”

It was clear speaking to Butler that representing England was beneficial in a playing sense as well as a matter of pride: “It’s always nice to be playing with the lads your age because everyone is enthused and ready to play. I really enjoy my time with those boys and had a bit of success with the Six Nations and the World Cup last year.”

Butler references the Under 20s Championship in Georgia where the English fell to New Zealand in the final. In this tournament, Butler played the majority of his rugby at outside centre, with Wasps’ playmaker Jacob Umaga at inside centre.

Compare that to Newcastle's 15 which had an average age of 25, including 7? internationals, led by Ally Hogg (34).

That gives you an indication of how good today's win was... #SuperCavs pic.twitter.com/Q1qrKm7Hm7

Worcester obviously see so much more than just a player in Butler, they see him as a leader. Named captain of Worcester’s A-League squad aged just 19, Butler had a new role to try and warm to - just like he had to with rugby over 10 years ago: “I didn’t quite enjoy it at the start but it’s something I look forward to now. It’s a nice challenge and it’s an extra part of my game now that I can start to try and build on.”

All of this said, Butler wasn’t sure that he would ever make it to the top level of English rugby, only realising in sixth form that he could play rugby for a living: “I played in sixth form  for the first team at Hereford Cathedral and then obviously playing with Worcester’s under 18s academy team. It probably wasn’t up until then where I actually thought I could make a living out of this and give being a rugby player a go.”

Butler is now part of a Worcester side which has the like of current England player and a British & Irish Lion, Ben Te’o amongst its ranks: “He and the rest of the centres help us young lads out. Obviously, his success is definitely something that you can look up to and sort of aspire to be like.”

Not the result we were after but loved making my premiership debut… https://t.co/8n90j8i3u2

When asked on his aspirations for next season, Butler was honest: “Obviously, have a good pre-season and try and get in some of the pre-season games, but just to be pushing in the first team. I’d really like to play in the European games and then obviously if an opportunity comes up for me, I get the chance for the first team.”

Worcester’s final home game of the season is against Harlequins, with the club’s season ending away to Northampton at Franklin’s Gardens.