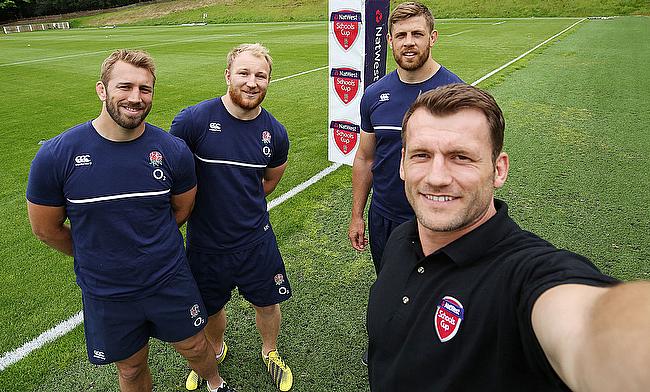 Gloucester star Matt Kvesic believes that the NatWest Schools Cup is a great initiative for the development of young players.

The flanker, who impressed in the Premiership for the Cherry and Whites this season, joined 30 of the best schoolboys from this year’s NatWest Schools Cup on Sunday.

The NatWest Schools Cup Academy Day was set-up to encourage those boys playing at school to continue to progress along the same pathway that many current England players have taken including the likes of Chris Robshaw, Anthony Watson, Matt Mullan and Kvesic himself.

“I was at Worcester Sixth Form College when I was involved with the NatWest Cup,” said Kvesic.  I remember playing St Peters High School from Gloucester in the quarter-finals, but got knocked out of the tournament.

The overall competition is good to play in. You get to play schools from all over the country and it was good fun to play in and we shouldn’t actually have lost the quarter-final because we had a good team at school! I only played one year in the tournament, but still have good memories of it.

Kvesic was working alongside former England international Mark Cueto, offering advice and insight to some of the most promising young players which the country is currently producing.

The boys were put through their paces by leading coaches, before reviewing their training session with the help of England’s video analysts and players.

“Firstly we did some pictures with the guys and swapped a few shirts before the lads went out and did some training,” added Kvesic.

“They split into their Under 15 and Under 18 groups and some did some strength and conditioning work and some were working on their general rugby principles. They then swapped over and we just chipped in and helped out with our opinions and what we thought would help them going forward.

“In one of the games they turned it into a life breakdown scenario. We talked through with them a little bit about body height and body position and trying to win that space over the ball, but nothing to specific. It was more about finding space around the pitch and ball in hand based stuff. The breakdown is probably not as fun so they probably didn’t want to learn much about that!

“The sessions were videoed so once they were finished up, we analysed their work after lunch. We sat down as a big group and went through some good clips and bad clips which gave them a great insight to see what life is like as a professional rugby player in that one day.

Matt Kvesic was speaking at the NatWest Schools Cup Academy Day, on behalf of England Rugby and official partner NatWest. In reward for their performances in this year’s NatWest Schools Cup 30 school players were invited to a training day with England squad members.