Surreal Summer Of Sevens For Strange 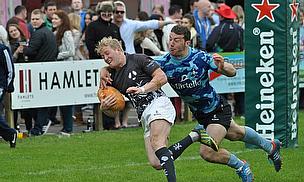 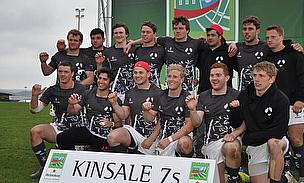 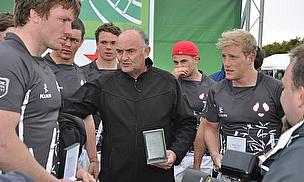 Sevens Heaven - So Tell The Men In Blazers!

Strange was selected to represent Harlequins in the final day of the inaugural World Club 7’s tournament at Twickenham in August.

“It was my first time at Twickenham”, said Freddie, “playing with guys of such a high standard was an incredible experience”.

Freddie’s whirlwind summer began only a week before, when he applied for the 2013 Ultimate Rugby Sevens programme. After sending in an application and performing well in the subsequent trial, Strange was selected to play for the Gilbert Barbarians on the Saturday of the World Club 7’s.

“We had a training session with the Auckland team just a few days before, and it was only then that I realised how good the standard was going to be”.

Strange performed well on the Saturday and as a result of a number of injuries he was selected to represent Harlequins in the final day’s rugby.

“The possibility of helping out the big teams if players picked up knocks was talked about before the tournament started, but I never thought I would actually have been asked to play; it was a real honour”.

Harlequins won their quarter final with Gloucester 19-7, in an impressive display over the current JP Morgan 7’s Champions. After conceding an early try Quins fought back strong with tries from Jordan Burns, Charlie Walker and Joe Trayfoot.

The semi-final was a daunting prospect as the quartered men faced Auckland. The match was a repeat of the previous day’s final pool C match, which Quins won 31-14, but in a complete role-reversal, it was Auckland who won the semi with a 14-31 victory.

“It was a really tough, physical game” added Strange who featured in the second half of the game.

“Although the result wasn’t the one we wanted it was an incredible experience to be a part of the tournament”.

Harlequins moved into a third place playoff against Buenos Aires, which they lost 31-7, to finish the tournament in fourth overall.

“Through a combination of injury and lack of opportunity I’ve not been able to play as much sevens rugby as I would have liked in recent years. The World Club 7’s was a brilliant opportunity for me and has given me the hunger to work on my sevens and eventually feel comfortable at the sport’s top level.”

Strange, after graduating from Bath University has recently signed for Esher in National 1.

“I’ve already settled really well into the atmosphere here at Esher. The club’s coaching staff and great bunch of players got me involved straight away, both on and off the field. The club has a great team ethos and family-feel to it; I can’t wait to get stuck into the season”.

Esher have just completed their pre-season training. The team recorded two convincing wins over Dorking, 37-19, and Cardiff, 24-10; however, an 81-12 drubbing at the hands of Championship side London Scottish shows there is still room for improvement.

“Obviously to get beaten like that is always a massive disappointment” lamented Strange, “but we have been concentrating on our defence and physicality a lot this week, which we are looking to implement against Richmond in our first league game next weekend”.

The fly-half told Talking Rugby Union that the transition from University rugby to the adult game “obviously was physically demanding, but I have loved the challenge. The conversion is like moving from a boy’s game to a man’s really; there is understandably a great deal more experience out there. I have lots to learn still and want to gain as much experience from Esher’s senior players as I can.

Strange did not commit on favouring either 15s rugby or the shorter version of the game: “the beauty of either discipline is that they are predominantly seasonal and rarely overlap. I would love to play as many sevens tournaments as I can this year, on home soil and overseas, but for the moment I am fully dedicated to my rugby at Esher.

“I want to try and become a regular in Esher’s starting team, whilst working on my weaknesses and adapting to the club’s style of rugby. I want to get as involved as I can at Esher and hopefully have a strong season this year and the next”.

Esher begin their National 1 campaign next weekend away to Richmond.