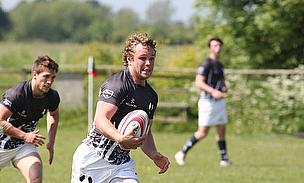 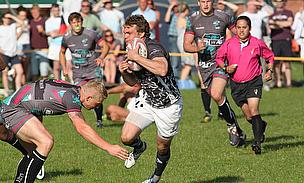 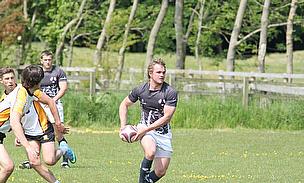 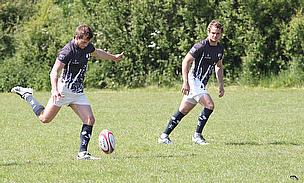 For Ed Styles, juggling a professional rugby career with a University degree has been no easy task.

Ed is currently playing for Nottingham in the Championship, whilst studying part time at Loughborough University. He spoke to Talking Rugby Union and said that best thing about his recent move to the club is that he’s “just so happy to be playing lots of rugby again.

After a difficult season last year at Rotherham Titans, Ed did not play as much as he would have liked, but he added that “I’m really enjoying my time at Nottingham so far, I’ve not missed a minute of rugby this season, from the summer up to now.

“It’s great to be involved.”

However, after leaving Sedbergh and taking up study at Loughborough, Ed’s rugby career has taken a number of different courses.

The winger’s professional dreams first began in the Sale Sharks Academy, where he played A-League and won two caps in the Premiership, all the while studying at Loughborough.

Styles then went out on loan to his home club of Macclesfield, before singing with Championship side Rotherham Titans.

However, after two seasons with Rotherham – all the while still studying part-time at Loughborough – Ed decided to leave over the summer and join Nottingham Rugby Club, who are also in the Championship.
“It wasn’t really my choice to move, but I’m very glad that I did.

“I hadn’t played much there, and just wasn’t in favour, really.

“The opportunity came up to play for Nottingham, and because I am still studying at Loughborough, with Nottingham being so close, it worked out quite well.”

Ed has been with his new club since pre-season over the summer, and now, five games into the season he told Talking Rugby Union that he is loving his time there:

“They play a great style of rugby at Nottingham, and although things aren’t going our way at the moment, it is coming together.

“We’ve played the top few teams in the league so far this season in a difficult run of fixtures, but we have a run of games in November that we have targeted and hope to well in.

“Hopefully we can start achieving soon and get a bit of a role going.”

Nottingham currently sit tenth in the Championship table with just five points and one win to their name from five outings.

This coming weekend they welcome Bedford Blues to the Midlands. Bedford are just two places above Nottingham in the league table on eight points and just the one win.

Jersey sit between the two teams, with two wins to their name, but only seven points, as two were deducted after Jersey fielded an ineligible player.

Styles believes that this Sunday’s game with Bedford is hugely important, and should play a part in the rest of the season:

“It’s such a huge game for our season, especially after the rivalry Nottingham had with them last season and the fact we’re both looking to kick start our seasons from now.

“They’ve had some tough games as well, and I think both sides will be targeting Sunday as a winnable game that can really build some momentum this season.

“In the last few weeks we have concentrated on ourselves in training and our own game plan, rather than trying to adapt each week to the different teams that we face.

“If we can play to our game plans, though, and our structure, then it will go well.

We then asked Ed more about his time at Nottingham so far this season and whether he saw much difference between them and his former club Rotherham.

Ed explained that his new club “is a bit different: Nottingham is extremely well structured and everything is well planned to the minute.

“We exactly how long we are going to be doing drills for and exactly what we are doing in training and for how long – everything is very professionally structured.

“They plan for you to do your own personal skills, combined with focussed stuff for a particular position or just a few players.

“And in terms of the conditioning side, I think that has been the biggest change for me. I’ve never felt so fit or confident playing rugby; that, combined with the off-field support has been the best thing really.”

Ed also added that one of his greatest rugby experiences, not just in a Nottingham jersey, was scoring a try live on Sky Sports earlier this season.

“Yeah it was brilliant to get a try early in the season for my new club and especially on Sky, that always helps”, Ed joked.

“I’ve only seen it once myself, but I believe there were a fair few replays after the referee asked the TMO whether to award the try or not.

“But, yeah, it was really good, I had plenty of family watching, including my grandparents who haven’t seen me play for a long time, so it was a great experience.”

Alongside playing for Sale academy, Rotherham and now Nottingham, whilst studying at Loughborough, Ed also represented the England Students side.

An incredible feat after only playing 30 minutes of University rugby for Loughborough in his time their!
“Students was really good”, Ed added, “I really enjoyed it.

“We played France at home at Richmond, which was a great win, and then travelled away to Portugal to play their national first team side, which was a brilliant trip.

“But unfortunately I broke my ankle in the training week leading up to playing France away, which lead to a very long period out of the game.

“But other than that it was a great experience, and a chance to play with a whole bunch of new lads.”

Due to Ed’s contracting with a number of clubs over his time at Loughborough, he has not be allowed to play for the University side at all. However, he managed to get the okay to play half a BUCS game on a Wednesday so he could qualify for the England Students side after just one University rugby appearance.
However, a key facet of the England Students side is the name student.

Ed has extended his undergraduate course in Architectural Engineering and Design Management from three years to five, which he reads part time.

Although Ed seemingly has the best of both worlds, playing rugby professionally whilst attaining a degree, given his time over he would “rather have gone straight to University after school rather than play rugby at Sale.

“I had a great two years in the academy there, but my course has taken me a long time to do after, so I think I would have been much better off at University.

“It’s been alright, but I’ve not been able to concentrate on my studies some times, with lots of travelling around the country with rugby.

“It’s been hard work basically, but I have to say, it’s kept me busy!”

“Sevens is a great game”, Ed added “and I loved playing it this year.

“It was a time where I had not had much game time for Rotherham, and sevens is perfect for getting out there, getting confidence and really just getting your hands on the ball.

“I think that all really helped me going into this season with Nottingham; obviously sevens is all about fitness and I think I got into pretty good shape over the summer through it.”

When asked about his sevens plans for next season, the Nottingham winger was adamant that he “would love to play more sevens again next summer, I’m just waiting for that Red Panda invite…”

Lastly, Talking Rugby Union asked Ed about his plans for the rest of the season and ambitions on both a personal and club level.

Ed maintained that most important thing for him is “to get my degree sorted.

“In terms of this season I want to get my degree done and I’d love to keep playing at Nottingham every week.

“I’ve played all over the backs so far this season and I really want to solidify a position somewhere in the back three.

“And then finally, I hope to secure another contract at Nottingham for next season, providing I stay injury free and put in some good performances.

“After finishing my degree I can then spend a bit more time just focusing on my rugby and give it everything.”