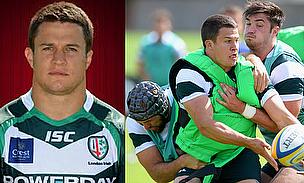 Former Sale Sharks utility back Fergus Mulchrone claims that his greatest rugby memory is scoring two tries for Sale against London Irish in the 2010 LV Cup. Little did Fergus know, three years later he would be enjoying his first full Premiership season in an Exiles shirt.

Fergus joined London Irish over the summer and has so far made six appearances for his new club and already scored two tries.

His rugby career began at Saint Ambrose College in Manchester; from there he joined the Sale Sharks academy and went to Manchester Metropolitan University.

After leaving University Fergus has experienced a whirlwind ride into the professional game: first playing a number of games for Sale Sharks, before moving to Championship side Rotherham Titans and finally, this season, moving to London Irish as a fully contracted Premiership player.

The Manchester-born back has experienced a wealth of different levels of rugby, from schoolboy, to A League, University, Championship and now the Premiership; following Talking Rugby Union’s interview with him, he said that “the step up from Championship rugby to the top flight wasn’t as greater leap as I had first expected.

“Although Rotherham may be limited in facilities compared to top-flight clubs, they are incredibly professional in how they do everything”, Fergus added.

“The application they put in – in terms of gym time, nutrition and training – is well up there with the professionals.

“So, in many ways, the change hasn’t been that big. I still put in lots of gym work in the morning and then head out onto the field in the afternoon.”

Fergus starred in the Championship last season with a number of good performances. Although Rotherham only finished seventh in the league, the side impressed.

In particular Fergus and teammate Eamonn Sheridan stood out from the crowd, as the pair joined London Irish over the summer.

He told Talking Rugby Union that he has “settled in well already at the club, after a great summer and pre-season.

“We were one of the earliest teams to get back together after the summer, which gave the players – especially myself and the other new Championship guys – plenty of time to get to know everyone and get into the swing of top-flight rugby.

“There was myself, Eamonn and a few boys from Nottigham who have all come in from the Championship, and all the boys here have been really welcoming and we’ve fitted in really well.”

Over his short period of time spent at Irish, Fergus added that he has already learnt lots about his own rugby and the game itself from senior players at the club, like Irish internationals Tomas O’Leary and Ian Humphreys.

However, he also thanked Sale Sharks’ former fly half Charlie Hodgson and current one, Nick Macleod, for helping with his development from an academy player to a professional.

Fergus has made six appearances so far this season, with the most recent being yesterday away to Newcastle Falcons at Kingston Park.

After an incredibly close game, the visitors eventually fell to the side from the North East by 13 points to 11, after an Adam Powell try 15 minutes from the final whistle made the difference.

Irish currently sit tenth in the Premiership after the weekend’s games, joint with Gloucester on just 10 points.

However, Fergus confirmed that there is no need to panic:

“As a club we’re not looking far ahead at all. It is literally week by week; we’re taking each game as it comes and putting everything we have into that game.

“I don’t think we can afford to look further into the future than the team that is put in front of us each week.

“Next week we have Northampton at home, and although we always like to target our home games, we’re under no illusion that it’s going to be an easy game for us.

“Northampton are playing really well so far this season, and with the calibre of players that they have, it’s going to be a tough game.”

Next weekend also sees the beginning of the Aumtumn Internationals, with England and Australia kicking off the fixtures at Twickenham on Saturday. As a result, the Premiership stage will open up for the taking of new talent with many players leaving to represent their countries.

Fergus’s own international allegiances are not straightforward, however, with an English born mother and Irish heritage on his father’s side, the Exiles back would be eligible to represent either nation.

However, when asked about the predicament, he maintained that “I’ve had no thoughts on any international rugby at the moment.

“I’m one hundred per cent focused on my club rugby at the moment and trying my hardest to keep my name on the team sheet week in week out.

“Although London Irish, as a club, has a relatively small squad, there is a hell of a lot of competition to get into the team, especially with players coming back from injury.”

Finally, we asked Fergus about his younger brother Charlie, a scrum half who is another one to watch out for in the future.

Like his older brother, Charlie has impressed whilst playing for Rotherham Titans helping them to their current position of second in the Championship.

The brothers have played together at University and Macclesfield before joining Rotherham together last year.

Fergus added that “there are no rumours” about Charlie continuing the trend with a move to London Irish “as of yet”.

“Charlie made a few headlines last season and there are certainly a few eyes on him this year from the Premiership.

Fergus added that “for the both of us at the moment, we’re just concentrating on doing our jobs at our clubs and playing the best rugby that we can.”