The past, the present and the future - Exeter University is a proven pathway for success 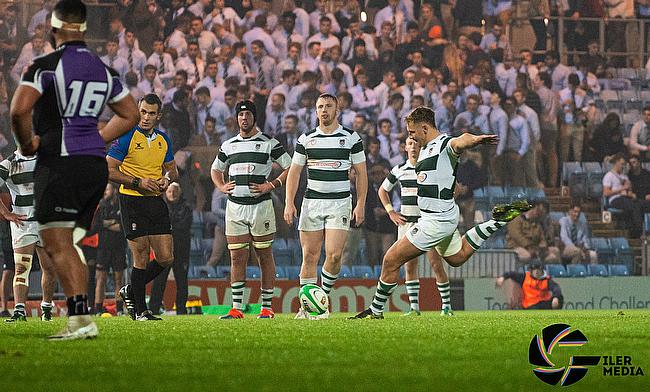 Exclusive: Harlequins’ Jack Kenningham on uni rugby, crowds and Europe
Inside the University of Exeter pathway and why it is benefitting the Red Roses
University Rugby is strengthening its status within professional pathways - and it is only going in one direction
You get a ‘winning mentality' in both camps

These are just some of the names to have played for Exeter University Rugby Club at Sandy Park in the last few seasons before going on to play Premiership Rugby.

Varsity nights at the Chiefs’ home ground are a special occasion and one of the biggest events in the Exeter Student Sport calendar, with the aforementioned quartet experiencing it for themselves.

With upwards of 4000 students in attendance year in, year out, matches at Sandy Park offer an opportunity for university students to experience a professional matchday setup at one of the best grounds in the country.

This Wednesday’s match against Loughborough is on course to be another standout fixture. For many students, this will be the biggest crowd they play in front of during their rugby career, with a select few going on to experience that atmosphere every week in English rugby’s top-flight.

For the first time since 2018, our #Varsity fixture from Sandy Park will be streamed live on YouTube tomorrow evening!

“Varsity at Exeter is a huge event for everybody,” explains Director of Rugby Keith Fleming. “It’s an experience these boys remember for the rest of their lives, whatever level of rugby they play after leaving university.”

The relationship with Exeter Chiefs, which allows events such as this to happen, is continuing to prosper and develop.

This season has seen Dafydd Jenkins and Christ Tshiunza both go from playing university rugby to representing the Chiefs. In the case of the latter, he has also gone on to win his first two Wales senior caps with many more still to come.

The likes of Capstick, Sam Maunder and Sam Skinner all came through the university pathway at Exeter and have since become important assets for the Chiefs, but it would have been in an Exeter University jersey where they got their first experience of the famous Sandy Park roar.

It’s an occasion fondly remembered by Capstick who, despite now closing in on 50 appearances for the Chiefs, still cherishes playing in the Varsity fixture.

“I played Varsity in my first year at university,” he explains. “It was the first time my flatmates had experienced a rugby match and it was great to see them after the game in Timepiece (the main Exeter nightclub.) It was some night all round. The atmosphere before and after the match was just unreal!”

That night against Leeds Beckett, Exeter pulled off one of the great university rugby comebacks, which was started by a try from Capstick early in the second half.

Trailing with the clock in the red, Arthur Relton - another player to benefit from the Chiefs pathway - seized his opportunity to race over in the corner to tie the match. With an eerie silence around Sandy Park, fly-half Harry Bazalgette slotted the conversion from the touchline to steal the match for Exeter and spark wild celebrations.

He's hoping for silverware with England U20s to round off a brilliant season...@ExeterUniRFC and Exeter Chiefs' Richard Capstick spoke to @joeharvey34 ahead of the #WorldU20s in Argentina. https://t.co/DWmiAnLVrZ

Bazalgette has since signed a contract with Cornish Pirates in the Championship, joining fellow EURFC alumni Joe Elderkin in Penzance. Still though, he admits that “there’s nothing quite like” playing in front of the Sandy Park crowd for the university.

“I was lucky enough to play in three Varsity matches and all of them certainly stand out as highlights of my time playing for EURFC. Playing at the home of Exeter Rugby in front of 4000 students in full swing, there’s nothing quite like it!”

BUCS Super Rugby as a league is gaining more and more recognition as a viable pathway into the professional game. This season alone, Oli Burrows, Dafydd Jenkins, Archie Hosking, Dan John, Arthur Relton, Tom Cairns, Josh Barton and Ollie Leatherbarrow have all been part of matchday squads for Exeter Chiefs whilst studying at the university and playing university rugby.

Jenkins in recent weeks has become a key cog in the engine room for the Chiefs as they deal with international absentees. Still only 19, he stood out as one to watch in BUCS Super Rugby this season, before gaining a chance in a Chiefs shirt. He describes Varsity as a game that “everyone wants to play in,” although he admitted that it feels like “the one that you cannot lose.”

Jenkins played his first match at Sandy Park back in October, as EURFC took on Cardiff Met. He labelled the fixture as “a mental experience” and has since gone on to make his Exeter Chiefs, Gallagher Premiership and Heineken Champions Cup debuts at the same ground.

The sheer number of players breaking through into elite-level rugby in Exeter isn’t something that has happened by chance. The university’s BUCS Super Rugby squad is overseen by an array of experienced coaches, including Fleming, Rich Hodges and Exeter Chiefs Senior Coach Haydn Thomas.

Head Analyst at the Chiefs Gareth Elliott has also come on board as a forwards coach, with further players from within the university programme having the opportunity to train with the Chiefs should they showcase their potential in a EURFC shirt.

“It’s a proven pathway and one that is continuing to develop,” highlights Fleming. “To see the likes of Tom Lawday lifting the Premiership trophy having also won at Twickenham with the university, was a special feeling. Our programme is one that is fully integrated within the Chiefs systems and structures, but the opportunities are there for boys to put themselves in the shop window at all levels of the game.”

2 tries V England, but no No.8 Ollie Leatherbarrow, 19, in the @Scotlandteam u20s this week, he may get a run out with Exeter Chiefs on Saturday according to age-grade head coach Kenny Murray...

“It's a great opportunity for him to get exposure, he’ll come back a better player"

This season has seen a plethora of EURFC alumni playing in the Premiership, the Championship and in Europe, with Leatherbarrow and first-year student Rob Gordon also playing for Scotland U20s in the opening two rounds of the Six Nations this year.

Whilst Scotland involvement has denied the two backrowers the opportunity to play in a Varsity fixture, one suspects that chance will still come their way during their time at university.

Exeter versus Loughborough is one of the biggest university sporting rivalries in the country and in BUCS Super Rugby. The Green and Whites currently sit second in the table whilst Loughborough occupy third spot so Wednesday’s match will most certainly write another chapter in this storied rivalry.

For those students on the field, it marks an opportunity to put their names in lights, on the biggest stage they have ever experienced.