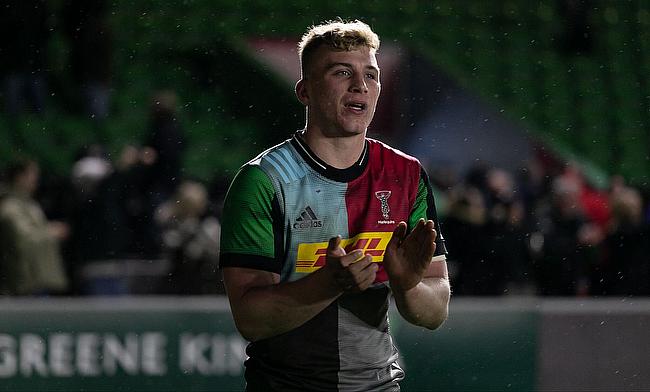 Jack Kenningham might only be 22, but already in his short professional career, the flanker has known little else but success with Harlequins.

Making his debut for the West Londoners against Newcastle in February following injury to Will Evans, Kenningham made himself one of the first names on the team sheet, starting alongside James Chisholm and Alex Dombrandt in the back-row that felled Exeter Chiefs in the Premiership Final.

So far this season, Tabai Matson has entrusted the flanker on eight occasions in the Premiership. Eddie Jones has clearly been keeping his eye on the developing back-row too, the 22-year-old having been included in two England camps so far in his career, the opportunity to make his Test debut dashed after being advised to isolate by the NHS Covid-19 app.

Still a relative newcomer to professional rugby, Kenningham has certainly had something of a whirlwind year, the Richmond-raised forward saying that it has taken him time to get his head around the journey he has been on.

“It has been a brilliant 10 months, I am over the moon with how it has been,” Kenningham told TRU. “It obviously takes a while, but you have to keep pushing yourself forward and I just want to keep pushing myself as best I can to make myself the best player I can be.

“I feel like I have digested what happened last season and it is now about me growing and pushing on from what I have done and how I can make myself better. That is just going to be through playing and doing what I can and working on myself.

“I would definitely say that I have had the opportunity to digest it. It is always going to be nice to look back on, but for me now, it is about going as well as I can here and keep improving my game to take it to the next level.”

Heading into the club’s first Champions Cup campaign since the 2019/20 season, Quins’ form is far from ideal. Losing back-to-back Premiership fixtures against London Irish and most recently to table-toppers Leicester Tigers, this sinking feeling something that the English champions are unfamiliar with as of late.

Having pressed on with their no-holds-barred style of rugby, Quins have picked up wins over Bristol Bears, Worcester Warriors, Newcastle Falcons Bath Rugby and Wasps, but despite falling short on four occasions this season the club still finding themselves fourth in the league table.

But despite those recent defeats, Kenningham believes that plenty can be learnt from their shortcomings, much as the team did last season on their way to silverware.

“We were really frustrated because we took two points from a possible eight to 10,” he said. “At London Irish, as a group we reflected and we knew we weren’t good enough, we were just off the boil, and then Leicester, I think the biggest frustration was that we thought we played really, really well in parts.

“But we had that before. Last season we played Exeter and Bristol towards the backend of the season with narrow losses, and we played well.

“It is a long season, and it is game like that where you get a lot out of it and despite the loss, we will learn a lot from it and when it comes to next time, we will be better prepared to close out a game and put our style of rugby out there against the top teams.”

Time in blue and gold

As much as Kenningham is a Harlequins academy product, much of the 22-year-old’s development was done in Somerset. Studying at the University of Bath between 2018 and 2021, the flanker became something of a stalwart in Aaron James’ side.

Now sitting proudly on the Team Bath website on their list of famous faces, Kenningham played alongside the likes of Wil Partington, Miles Reid, Beck Cutting and Hugo Stiles in the 2018/19 season where the side finished third in BUCS Super Rugby.

Playing consistent rugby for two years in the West Country, Kenningham is now one of numerous Harlequins players to have plied their trade at the university level, before thriving when it came to the cut and thrust of English professional rugby.

Even when it comes to the back-row stocks at the Stoop these traces can be seen, with former BUCS stand-outs Tom Lawday (Exeter University) and Alex Dombrandt (Cardiff Metropolitan) both having made their way to West London.

Luke Northmore was a teammate’s of Dombrandt’s during the side’s successful spell, whilst Will Edwards is yet another disciple of Loughborough University.

“It was Quins that pushed the uni side of things,” Kenningham, who graduated with a 2:1 in Sports Performance, said. “I was quite a late developer, so Quins came up with the idea and I think they felt that a year or so of being contracted and being able to train, but also to go off and keep working on myself.

“It is really rare to see a backrower playing consistently under 20 or 21. It was Quins who pushed it to begin with and it was just something that they worked really well with me on and going to uni was brilliant.

“I am a big believer in game time being the most important thing. If you are playing a lot of rugby you are going to improve, so one thing which you see a lot of the time is that people who come in (to a Premeirship club), if they go out on loan, they might bet a bit of game time there, but they sometimes struggle for that.

“I think for my development, and the fact that Quins were able to support me, but also help me. When I went to uni, it meant that I got a lot of good game time and we have seen so many lads come through BUCS Super Rugby.

“It meant I was able to develop my game on the pitch, playing lots, and also off it, because I was a late developer, so from the physical side of things, it worked perfectly. 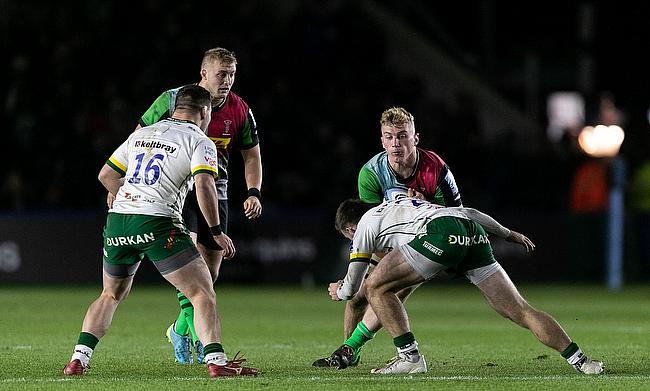 “Everyone is going to have their different ways of how they break in, and a lot of lads will come in full-time and that will work brilliantly for them, and some people won’t even get picked up and they will go play at uni or for a club side and they will get picked up that way.

“For me, the best route was nailed by the club, myself and uni, who all worked together and that is a large reason why when I have come into the team, I have been able to take it with both hands.”

Having clearly excelled in BUCS Super Rugby, a natural next step is to ask what the 22-year-old’s favourite rugby memories of playing in blue and gold are.

“To be fair, there is a few,” he said. “We’d always have an anniversary game at the Rec and that was brilliant because we’d always fill out a stand and that would be a great day and a great night.

“I have really positive memories, because we won both matches in the years I played in them against Leeds Beckett and Cardiff. They stick out to me.

“We did so fantastically in my first year. I always look back with a little bit of frustration because I truly believe we should have won the whole thing. We beat Hartpury home and away in the regular season and then lost to them in the semi-final, which was gutting.”

Playing in front of fans… again

That experience of playing in front of a baying crowd comprised of university students and locals keen on a Wednesday night out, would provide Kenningham with one of the biggest crowds he would experience before lockdown restrictions were eased at the tail end of last season.

Making his Harlquins debut in front of empty stands, that duck would eventually be broken when the Stoop, somewhat ironically, welcomed Bath to TW2, and 4,000 fans made their way to the stadium.

Then the playoff game against Bristol eclipsed that number, before the Premiership Final arrived in late June, with 10,000 distancing themselves around Twickenham Stadium. Games at the Stoop this season have been well-attended too, with virtually each game having been a sell out.

In just a couple of weeks’ time, Kenningham will be experiencing his loudest roar yet when Big Game 13 is hosted at Twickenham on the 27 of December. Harlequins Women will be playing in the biggest annual rugby club fixture in the world, before the men will take on high-flying Northampton Saints.

“I remember my first,” Kenningham said, “we had Bath and 4,000 people at the Stoop and honestly I was thinking it was amazing. It was only 4,000 people and the noise was unreal.

“I remember thinking ‘this is just fantastic’. The next one was probably Bristol away in the semi-final, that was packed out, and we only had a couple of hundred people up in the corner of the stadium, and I remember during our comeback, scoring and going back to the line, looking up and they would be going absolutely crazy.

“All the games at the Stoop this season in the Premiership have been sold out and that has been fantastic. Most recently, Leicester on the weekend, which was agonisingly close, and we lost, but the actual atmosphere at Leicester itself was fantastic.

“It is such a cliché, but playing in front of fans is fantastic and, in a way, having made my debut in lockdown, I didn’t know that. Now I see, looking back, why the lads were just so desperate to get people back into stadiums.”

Kenningham has always been honest when it comes to his Harlequins fandom. When he was younger, he and his father – David – had season tickets, watching on as the likes of Joe Marler, Danny Care and Nick Evans won both the Challenge Cup and Premiership in the early 2010s.

His own appearances in Europe have been limited, with a Challenge Cup game against Ulster his only taste of continental rugby.

?? Castres your mind back to some of these classic matches.

???? We visit the Top 14 side again on Sunday. #COYQ pic.twitter.com/DUPC8UcStZ

Playing Castres this weekend, before Cardiff Rugby come to town a week later, a fast start in this seasons Champions Cup is imperative should a team want to progress to the next stage, something very much at the top of the team’s Christmas list.

“We want to get to the second stage of Europe,” Kenningham said. “That is a goal for us, as well as a top four in the Premiership and obviously people are going to look back at last year and people still think it was a fluke and we know it wasn’t.

“It is nice to dream, but our feet are stuck firmly on the floor. We have got goals and a goal of ours will be to get to the second stage of Europe. It is each game as it comes – as cliché as that sounds – and we have got two games over the next two weeks to put ourselves in a good position to kick on.”