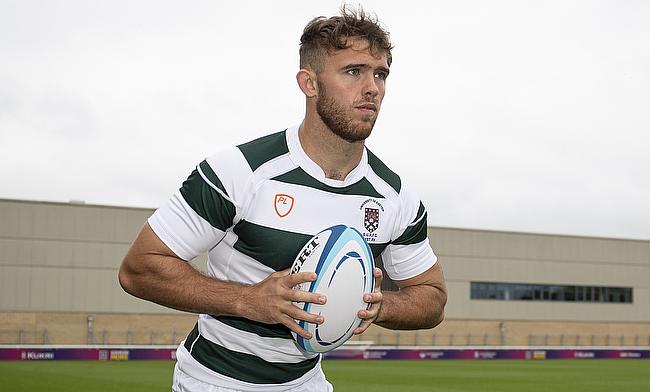 Less than a mile up the road from Twickenham is of course the home of the current Gallagher Premiership champions.

Three months ago, Harlequins went next door to England HQ and came away with their first title for nine years after defeating Exeter Chiefs 40-38 in a thrilling final.

Ten thousand fans were in attendance to see Quins become the kings of the country and it was the fairytale ending to a remarkable season for the club, with so many sub-plots and narratives attached to their success.

One specific storyline shone a light on the flourishing university rugby pathway which Harlequins have profited from with Alex Dombrandt, Jack Kenningham, Luke Northmore and Tom Lawday all part of the title-winning squad.

For Dombrandt (Cardiff Met) and Kenningham (University of Bath) in particular, their clear impact on the field has been recognised by Eddie Jones as both were named in England’s recent 45-man training squad as the autumn internationals start to come into view.

"Quins revealed their starting XV.... their back-row was T. Lawday, J.Kenningham & A. Dombrandt. What do they have in common? With centre L.Northmore, their journeys to the Premiership contain a chapter dedicated to university rugby which helped the quartet launch their careers." https://t.co/qX5Fk9FtU1

The Quins duo are just two examples of BUCS Super Rugby alumni (university rugby’s top division) to find themselves in the international picture, and this level of the sport is continuing to provide a stream of players who have the desired attributes to graduate into the professional rugby pathways.

Harry Randall (Bristol Bears) and Freddie Steward (Leicester Tigers) - who experienced university rugby with Hartpury and Loughborough, respectively - are also in England’s current plans and the student game is something which is on the radar of those within the RFU.

“University rugby always has been a viable pathway,” Don Barrell, the RFU’s Head of Performance Pathways and Programmes, says.

“There are a lot of players in the senior England squad who have gone through full-time degrees. The vast majority of players will not be an international rugby player at 18 years old. If you look at the average age of capping, it is happening later so do they have time to study or learn a trade? Of course they do.

“It only adds to their rugby career and that is why we are massively supportive of it because everyone is on a different journey. Broadening the minds of players has always been on our radar. Uni rugby has always been a part of the added value which we are talking about.”

Last week, the RFU outlined its development framework in a 42-page document with one of the key principles focusing on 'creating highly adaptable players with the skill set required to thrive in different environments.'

Arguably, university rugby falls into line with the RFU’s vision because it is an ‘environment’ which strives to produce holistic individuals who have a focus outside of the sport whilst also allowing them to realise their on-field potential and develop their life skills.

“Having played some university rugby in the past, I would say there are some good and bad in the off-field lessons!” Conor O’Shea, the RFU’s Director of Performance Rugby, says.

“Seriously though, it is a great breeding ground and for certain people, it will be the right one. We talk about the high-flyers and the fast-tracks that from minute one, you see where they are going but others might need time to finish school and get to grips with being away from home. There are so many different things and hurdles you have to cross in life so whilst university rugby is that good breeding ground, it has to be each to their own.”

The brains trust behind the RFU’s performance pathway are both in agreement that BUCS Rugby is played to an ‘outstanding level' and with English rugby’s governing body working closely with Premiership academies, Barrell and O’Shea recognise the relationships professional clubs have created with universities in order to aid the development of players.

One such partnership is the University of Exeter’s with Exeter Chiefs which continues to blossom under Head of Rugby Keith Fleming.

“For those of us who have been involved in university rugby for a long time, we have been playing a really good standard of rugby for a while,” Fleming tells TRU. “People weren’t taking a lot of notice, but the way our system and our pathway is working, we have proved that it is successful.

Articles with Sam Skinner & Sebastian Negri to get you in the mood for Scotland v Italy. #SixNations2019

“I do think Premiership clubs are seriously looking at universities now across the board because there are a growing number of us who offer fantastic programmes both on and off the field.”

The University of Bath's Head of Rugby Aaron James described their relationship with Bath Rugby as: “I may have used the analogy of boyfriend and girlfriend before whereas now we’re probably more married!” whilst Hartpury head coach Dan Murphy echoed Fleming by adding: “Players have a real good shot of playing good level rugby whilst putting themselves in the shop window plus, you’re getting an education around it as well."

Danny Milton (Cardiff Met Director of Rugby) oversaw the development of Premiership winners Dombrandt and Northmore: “To watch Alex and Luke in the Harlequins side, along with some of the other BUCS Super Rugby graduates as well from other institutions, is phenomenal.

“We are a genuine pathway. We want university rugby to have that little bit at the top end moving into the professional game. It is a great advert for us and the whole BUCS Super Rugby programme.”

But it is not just BSR which is providing a platform for players to develop and learn.

Women’s university rugby continues to be a fruitful source of recruitment for leading clubs and international sides across the UK, with 2019/20 National League winners the University of Edinburgh witnessing a number of their brightest talents taking their next steps in the game.

“The BUCS National League is a massive part of the pathway now,” says Edinburgh's Head of Performance Claire Cruikshank. “There will be players this year who will be playing Allianz Premier 15s and then playing BUCS Rugby on a Wednesday.

“It is down to the hard work that those players put in and their sacrifices and determination to get there. The more universities that can have that pathway, the more competitive the league is going to be and the better international players each nation will produce.

“For me, winning trophies is lovely, but it is all about the player pathway and if I can help five people go and play for their country, or in our case going to the Olympics, that is as good as winning a BUCS Championship. It is about those players succeeding both on and off the pitch.”

The rate at which the university game is seemingly growing is becoming difficult to ignore, with Barrell emphasising how conscious and excited the RFU are by the direction women’s rugby is heading in at all levels.

Whilst the sheer volume of players who ply their trade in the Premiership and the Allianz Premier 15s provides further vindication of the opportunities BUCS Rugby offers, it isn’t all about the numbers.

"I have always been so passionate about growing the game. I am really fortunate to be in this place and I am very excited about what the future holds.”

Natasha Hunt chats to TRU about her role within Hartpury University and the new @Premier15s season.https://t.co/OEFAjDMgHz pic.twitter.com/EnT1fwYoSG

And that is the reason why university rugby very much has a place in the professional pathway, highlighted by the model which the RFU is working towards.

“We have talked about university rugby, but we can talk about the National Leagues, the Championship; it is all part of that journey. Some people skip it all because they are wonderkids and others have to go through the hard yards and mature. We talk about the pathway, but the game of the pathway is the whole way through and you never forget where you come from.”

With the BUCS Super Rugby season beginning on Wednesday and the full university programme starting up again in October, we may unearth the next Alex Dombrandt or Zoe Aldcroft this term.

But when looking at the bigger picture, the values which university rugby encompass are being recognised more frequently and it is making it an extremely viable route for the next generation to take their next steps in the sport.