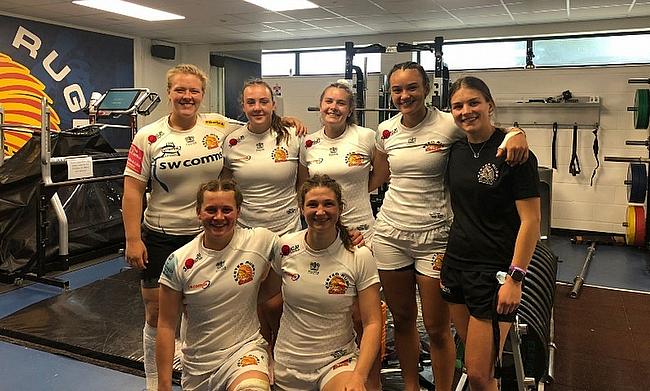 No rain on Cardiff Met’s parade whilst Durham lead the way
Amber Reed: Every game is just as special as the last one
Heather Kerr and Clara Nielson: From two Twickenham meetings to facing the best teams in the world
Leitch: 'I have been given loads of support and that has given me the opportunity to play for my country'

Sunday afternoon sees England return to Sandy Park as they get set for a blockbuster series of Tests, starting with back-to-back games against world champions New Zealand.

After Covid restrictions throughout the abridged 2021 Six Nations Championship, the match between the Red Roses and the Black Ferns will be the first time a women’s international in England has been played in front of a crowd since the pandemic.

Sandy Park has hosted two Red Roses internationals before, against Italy and France, each time selling around 10,000 tickets. Sales for Sunday’s match are expected to hit similar levels, continuing to firmly establish the appetite for women’s rugby in the south-west.

In the week that the government formally put its support behind the RFU’s bid to host the 2025 Rugby World Cup, this Sunday is a huge opportunity for Exeter as a city to continue establishing itself as the unofficial home of women’s rugby in England.

The formation of the Exeter Chiefs Women’s team last season, and their success in finishing sixth in their debut campaign, helped bring in over 2000 supporters to August’s pre-season friendly against Wasps. The match was also significant as it saw six current Exeter University students representing the club.

Our two Chiefs Stars have been named in the Red Roses Training Squad! ??

The first match of their Autumn Series is right here at Sandy Park on the 31st of October against New Zealand!

The women’s rugby programme at Exeter University has always been a successful one, winning back-to-back BUCS titles under the tutelage of now Worcester Warriors Women’s Head Coach Jo Yapp.

From Yapp’s successful team that won their most recent final in 2019, no less than 12 of the matchday squad have played in the Allianz Premier 15s over the last two seasons.

That success is now translating into international call-ups as well. Five of Simon Middleton’s squad for the autumn have passed through the doors at Exeter University, with Amber Reed, Bryony Cleall and Lagi Tuima joined by current students Flo Robinson and Merryn Doidge.

Both Robinson and Doidge have become crucial parts of Susie Appleby’s Exeter Chiefs side in recent seasons and were rewarded for their performances by being named amongst the replacements against France back in April, only for a floodlight failure to deny them their first caps. They will both be hoping they will finally get an opportunity to show what they can do this autumn.

All five players will be in very familiar surroundings this week, with both the Red Roses and Black Ferns being given access to the university rugby facilities in Exeter in order to train for the match.

Women’s Rugby Head Coach and current co-captain at Exeter Chiefs, Poppy Leitch, has seven England caps herself and was also part of the triumphant Twickenham team two years ago. She is thrilled that her university side will have an opportunity to watch the world’s best in action in their home city."

“It’s amazing for everyone involved,” she explained. “To have Flo and Merryn as part of that squad, as well as the girls also involved with England U20s, it just shows the strength of Exeter University in continually creating a pathway for girls to aspire to top-level rugby. For the girls to see their teammates and club alumni that they look up to all involved in an international like this, it gives them something to really aspire to.”

Full-back Doidge felt the same way, crediting her first year of playing university rugby as a crucial development period for her game.

“The talent that has come out of the university already shows there is the ability to do the same and shows us we are in the right place to continue the development. I really enjoyed my first year playing with the university and this also benefited my development and getting lots of game time to improve me as a player.”

When asked why the university programme has been so successful for so long, Head Coach Leitch attributed that success to the club finding the balance between academics and training that helps “facilitate an easy transition between university and Premiership rugby.”

“We run a programme that mirrors a Premiership programme,” she adds. “This not only physically and mentally prepares players as they progress through the elite pathway but also allows those who are already on the pathway to manage both academic and sporting commitment.

“We have many players who currently fall in that bracket, all of which are performing well in BUCS and the Allianz Premiership and achieving great things academically.”

It is a sentiment echoed by half-back Robinson, who has flourished in an Exeter Chiefs shirt whilst balancing her sporting commitments with her degree.

Robinson credits the university for their understanding and willingness to work with athletes competing at the highest level, ensuring that education and sporting achievement can be maximised to the same level.

“The university have been understanding when there have been clashes with exams, so when we went to France, they made it easy for us to change our exam times,” she acknowledged.

HUGE CONGRATULATIONS to Flo Robinson and Merryn Doidge on being named on the @EnglandRugby Red Roses squad who are playing France tonight! All of us at EURFC are rooting for you. @UoEStudentSport @ExeterUniRFC @ExeterChiefs @ExeposeSport pic.twitter.com/JfPHm7Oxx0

“It means we can get the most out of opportunities when they present themselves, without having to worry loads about changing the times of exams or deadlines. Education is really important to me, especially with where women’s sport is at the moment. It’s important to have a career outside of rugby. Being able to play alongside studying is a really good opportunity.”

Commenting on the Red Roses playing at Sandy Park, Doidge admitted that it was a “fabulous opportunity.”

“To have a showcase game including the best talent in the world at our home club is really exciting and it’s also great for women’s rugby in the south-west.”

With Reed, Cleall and Tuima all likely to be involved in some capacity this weekend, Exeter University’s international stock has never been higher.

It is surely now only a matter of time until Robinson and Doidge can also call themselves full internationals, as the pathway into top-level rugby from Exeter University continues to flourish. With Exeter Chiefs now involved in that pathway as well, the next university cohort are ready to make their mark.