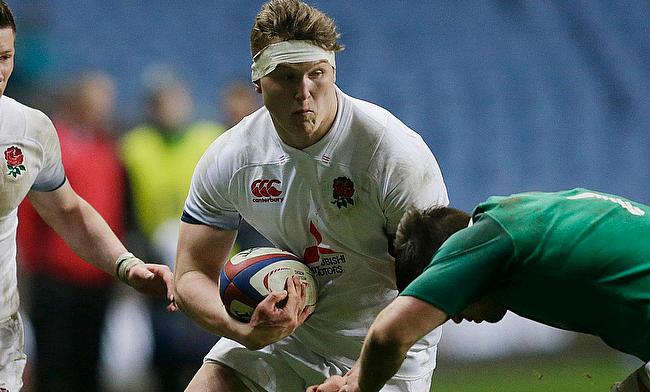 After an impressive start to the season, Ted Hill is continuing to shine on the Premiership and international stage
©PA

It's been quite the season so far for Worcester Warriors Academy player Ted Hill.

He has gone from being the latest addition to Eddie Jones's ever-growing list of England apprentices, to one of the youngest men in history to earn a full England Test cap in the backrow, falling just short of the title behind Sale Sharks openside Tom Curry.

In addition to the statement earlier this year from former Worcester captain and Irish lock Donncha O'Callaghan that Hill would go on to become a British and Irish Lion, current Warriors teammate Ethan Waller was plainly full of admiration when praising the impression Hill had made on him since arriving from Northampton Saints last season.

Waller said: "He [Hill] is a physical, freak of nature. Very big, very strong and extremely powerful. But also off the pitch, he's the most humble guy you'll ever meet."

What were you doing aged 19? #Worcester Warriors' Ted Hill was debuting for @EnglandRugby and has kept his place in the squad for #Australia https://t.co/LMylRlMdUa pic.twitter.com/o6DTn3e9KT— BBC Midlands Today (@bbcmtd) November 19, 2018

He continued: "[He's a] freak athlete, very, very quick, will hit hard and his positioning across the park is very good."

Soon after, Hill himself, without so much as a hint of arrogance or nervousness, described his recent journey from a “shock” Premiership debut to a fully-fledged Test cap.

Reflecting on his international appearance Hill said: "I was lucky enough to get my opportunity to play against Japan and I've just loved, and have been massively excited by, being invited to the camps.

"It meant a lot to me to go to those and it was a great honour. It was almost like the cherry on top to play against Japan, which is obviously a massive honour as well."

Hill went on to describe the moment he graced the Twickenham turf two weeks ago to face the Brave Blossoms. "Surreal, I think is the word. Also, standing there for the anthems was a crazy moment, looking out and seeing your family was a pretty amazing experience."

Given the fact that many of the men he would have watched topple the All Blacks at Twickenham in 2012 as a 13-year-old were now training alongside him, Hill admitted that his initial inclusion within the full squad was a daunting prospect.

"You look at all those guys and I'd never really met any of them before,” he said.

“And there wasn't really anyone there my age, only a few that were near about. But you mainly see them on TV and stuff, so it was a bit daunting.

“I felt I quickly adapted and just tried to play my rugby, which is what I was there for."

Shortly after the culmination of England's 35-15 victory over the Japanese - in which Hill was handed his five-minute cameo - videos of support and celebration from Malvern RFC, where Hill continues to coach the Colts team after taking the step up to the professional, and the Worcester Warriors team bus spread throughout social media.

Noting the support of both Malvern and his Worcester teammates, he said: "The support in Malvern is always amazing, they show a lot of support which is really nice of them. And obviously here [at Worcester], all the guys are really supportive."

Check out @MalvernRugby's reaction when Ted Hill made his England debut in the victory over Japan https://t.co/ZNLHG90NvV— Geoff Berkeley (@geoffberkeleyWN) November 17, 2018

When the inevitable question of whether his next goal is to target a spot in Jones's 2019 Rugby World Cup squad in Japan, Hill joked over the old adage of 'taking each game as it comes', plainly determined to focus on the here and now.

"You're going to hear it again, it is one game at a time, it's just the way it is. But, obviously that would be a dream, that would be amazing, but it's so far away and there are so many things coming up before that.

“First of all, Gloucester at the weekend, that's the first thing to look forward to. Then after that we've got European stuff and the Six Nations with England, if I'm lucky enough to be involved in that. So there's loads of stuff before that, but it would obviously be a dream come true if it were to happen.

He continued: "I've never done it before [played in front of the Shed at Kingsholm], it'll be a first for me. I've heard the atmosphere is pretty crazy there. It'll be good to run out there and see what it's all about."

As it would transpire, Hill's goal whilst back with the Warriors, under the request of Jones, is to continue to improve his carrying game whilst maintaining the early-season form he displayed against the likes of Leicester and 2017 league champions Exeter Chiefs.

"He [Jones] just told me to 'go back and work on your carrying, keep carrying well, keep tackling well'. His main word of advice was to go back and play like an international rugby player."

An interesting side story to Hill's England career is the debate over exactly where his future would lie, positionally. Earlier this season, Warriors' director of rugby Alan Solomons was unmoving in his description of Hill as a flanker, while Jones handed the youngster his England debut wearing the 19 jersey, the designated bench spot for a substitute second row.

Here's a little teaser ahead of my interview article on Ted Hill. Out soon on @TalkRugbyUnion.

Hill has played for the England u20s side both in the engine room and on the blindside of the scrum, proving himself more than capable of operating across the two positions. When asked whether Jones had decided on a definitive position for him, Hill was coy in his response.

It will have come as no surprise to any of the journalists or communications staff in the Sixways stadium media suite to hear that, in fact, Hill did not suffer from nerves in the lead up to his debut, accrediting his diligent preparations during the week to the crystal clear clarity over his role within the team.

"It's strange, I don't think for the England game I was nervous. Even for the Premiership stuff. I think against Leicester it was a bit of a shock to come on, but I didn't have time to be nervous.

"I think the only reason you should be nervous heading into a game is if you're not as prepared as you could have been or haven't given everything during the training week. I think for me to cancel out those nerves, I need to be switched on with training, make sure I understand my roles, whether that be at set piece, broken play or whatever. That sort of nullifies the nerves."

Hill continued: "There's certainly a calmness going into the games now [since facing Japan]. That's just from being around the best in the country I think, that's just a natural thing to happen.

"But it doesn't take away from the fact that the Premiership is a brutal league. You can't be too relaxed, otherwise people will snap you out of that.

"You sort of have to sit there and think 'I'm still quite early in my Premiership career', so you've got to think about that sometimes. But I do feel more relaxed."