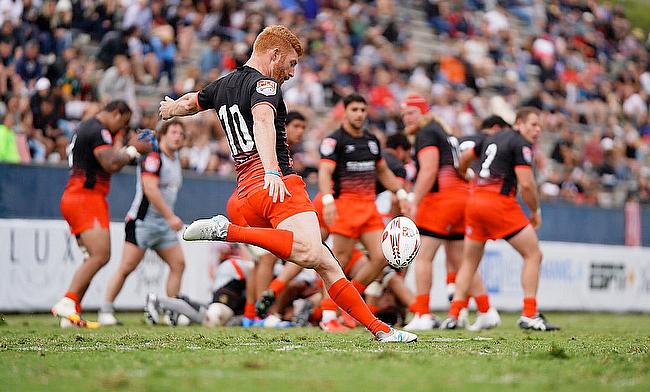 San Diego Legion’s Tadhg Leader has been a massive influence on his club’s first voyage in the MLR’s first season and the stats don’t lie.

When Leader has started, San Diego haven’t lost, but when injured or starting on the bench, the club have been beaten.

The former Connacht man had to leave the province due to an horrific run of injuries that led to a shoulder reconstruction. Deciding to make the most of his time away from rugby, two and a half years ago, Leader enrolled at Lindenwood University and never looked back.

“I was going to move back to Europe to play, but I really enjoyed my time in college, said the man from Galway. “So, I decided to hang on and two years later the MLR came along. I’m going to be here for a lot longer, I just got a five-year Visa last week.”

When joining San Diego, Tadhg admits that he didn’t know what to expect when he first arrived to training. It’s fair to say that he was impressed. “Every day we train in a place called EXOS and from a strength and conditioning standpoint it’s a million miles away from Connacht,”

“It’s where a lot of current NFL players train. We’re in this facility daily, surrounded by the world’s best athletes. It’s quite unique that we have access to this kind of facility,” added Leader.

Playing at the multi-purpose Torrero Stadium for their home games, Leader has been mightily impressed by the standard of the surface that he gets to play on: “It’s the best field I’ve ever played on, alongside the Aviva Stadium in Dublin.

“Initially when I came out here, I expected the facilities to be quite poor, but San Diego has been amazing. We’ve been really fortunate with what we’ve been given in terms of training facilities and stadium.”

However, Tadhg does admit that other clubs aren’t quite at the levels of professionalism or organisation that San Diego are at: “Other teams aren’t as far along as we are. We played a game recently in New Orleans where I think half the field was basically sand.

“That’s the other end of the spectrum. Some teams are quite developed, whereas other guys are trying to figure things out. Thankfully I’m San Diego.”

Taking on the captaincy the week after a resounding 31-5 loss to the Austin Elite, San Diego have been on a winning streak since Leader became the clubs main man.

“Initially I was given the captaincy because our internationals had gone away. The responsibility is something that I’ve cherished,” Leader proudly said. “I think I’ve performed better off the back of it to be honest. I’ve really enjoyed the opportunity to captain the guys and thankfully I get to keep the job for the playoffs.”

Speaking of playoffs, San Diego take on Seattle as part of the double header at Infinity Park in Glendale. Leader is understandably wary of his opposition who had a resounding 39-23 victory over a visiting San Diego.

Leader continued; “We’ve brought in a lot of new guys and the guys who were playing that day are a lot more experienced now. We’re definitely very confident as a side, we’ve won the last three games, so morale is high in camp.”

Not the only Irishman in the MLR, Leader has kept in contact with his fellow countrymen also playing in the league: “We’re all definitely surprised by the level of competition. We knew the physicality and things of that nature would be right up there. There are a lot of amazing players here who could do good things in Europe.”

“I’ve played a lot of Championship teams in England in the British and Irish Cup. I’d compare the level to something like that and with more teams joining, the growth and the potential is amazing.”

San Diego Legion will play the Seattle Seawolves in their playoff match as part of the MLR Championship series that will see Glendale play Utah.