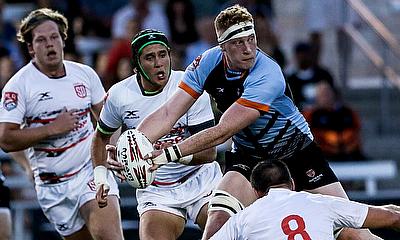 Austin were narrowly edged out by Seattle
©MLR

With the league’s best players away on international duty, the MLR showcased some of the grassroots talent that fans have been waiting to see.

Seattle came into this game with superb form, having not lost since the 28th of April when they were beaten by table-toppers Glendale. However, they were without key players such as Phil Mack, Ray Barkwill and Olive Kilifi. In comparison, Austin’s biggest loss was try-scoring flanker Hanco Germishuys who played against Russia instead.

It was the somewhat superior Seattle who started the better of the two sides. Timothee Guillimin kicked two penalties to start the scoring for his team. The penalties both came as a result of continued Austin pressure, forcing the Seattle defence to give away kickable penalties to the Frenchman.

Not too long after kicking the second penalty, Guillimin was called into action again. This time for a conversion following Irish lock Ross Deacon’s opportunistic try from the base of a ruck. Guillimin successfully converted the try.

Seattle hit back through their former Fijian international William Rasileka. However, fly-half Will Holder was unable to convert his teammates score on this occasion. Guillimin bettered his opposite number later on in the half, scoring his third penalty of the opening period. Holder would have the last say of the first 40 though, kicking a penalty and reducing his side’s deficit.

Seattle began the second half much the better side. This was never more prevalent than when winger Sequoyah Burke-Combs cut through the Austin defence. Again, Holder was unable to score the conversion, but just over 15 minutes later, another opportunity would present itself.

This opportunity came in the package of former Oregon Duck, Taylor Krumrei. The Californian opened his account for the season and, finally, Holder kicked a conversion. The only other action from this half was Austin getting just the three points from the boot of Guillimin, making the score a tight 19-20 win in Seattle’s favour.

Glendale hosted bottom of the table SaberCats in what was their opportunity to take the lead in the MLR again. The Californians held an early advantage through winger Harley Davidson, fresh from his sides break from the league. Maximo de Achaval, moved from fullback to fly-half with Will Magie away, kicked the conversion to extend Glendale’s league.

Houston did eventually hit back before the first half concluded. Fijian Josua Vici winger got over the line, following some sloppy Glendale defence. Mercurial fly-half Sam Windsor did convert the score and brought the opening 40 to a close.

The second half began in much the same manner as the first.  Davidson raced over to complete his hat-trick and allowed his teammate, de Achaval to get more points from the tee. Houston got on the scoresheet earlier in this half. Rugby league convert Matt Trouville scored a try to keep the SaberCats in the game, Windsor failed to convert this try though.

From here, de Achaval really took charge for the Raptors. He did this through scoring a try, converting his own effort and two minutes later, slotting over a wonderful drop goal. Houston wouldn’t be kept down in this half though, winger Alex Elkins powered over the line and allowed Windsor to convert.

Glendale eventually ended their scoring. De Achaval rounded off his sides scoring with a penalty in the 69th minute. However, it would be SaberCats who had the last say. Elkins again went over the whitewash and scored a try that wouldn’t be converted, giving a much-depleted Glendale a 37-24 victory at home.

Having had a dip in form in the last few weeks, San Diego still have the opportunity to get into the MLR play-offs. NOLA still have the chance also, so both sides had it all to play for in Louisiana. It was the Gold who started the better as centre Tim Maupin stormed over and allowed South African fullback JP Eloff to start off his scoring.

San Diego wouldn’t be contained for long though. Winger Pat Blair scythed through the NOLA defensive line to open San Diego’s points-scoring. Captain, Tadgh Leader, got his first points of the afternoon, not by converting Blair’s try, but through a penalty several minutes later. Ryan Matyas added to San Diego’s tally with a try that gave them a six-point advantage after Leader nailed yet another kick.

NOLA’s only response came through a JP Eloff penalty. However, it was the Legion who would finish much the stronger at the end of the first half. Centre Anthony Salabar broke through a disappointing NOLA defence to give Leader another conversion.

San Diego didn’t let the half-time break stop their momentum. Nick Evans went over as NOLA were still trying to reorganise themselves. NOLA did eventually find some form as utility back Cameron Troxler scored a try that was converted by JP Eloff.

2007 Rugby World Cup hero Taku Ngwenya proved that he still had the pace to compete at the top level when he scored a try that allowed Leader to gather another two points for the Legion. Having converted all of his sides tries during the game, Eloff now decided to score a try of his own but failed to convert.

San Diego secured the points when Nathan Sylvia went over the line for his first of the season. The prop’s score went unconverted so meant that the score line was 22-39 in favour of the Legion.

What was good to see this week was that the sides who were bereft of their international stars didn’t struggle. This would come as a comfort to the fans of the league as there was no massive dip in the league’s quality.

It allowed players not too far off the first team to prove themselves. Last week’s results mean that Houston can’t make the play-offs and Glendale sit on top of the pile once again, with Seattle just behind them.

This weekend see’s NOLA travel to Utah, a top two clash between Glendale and Seattle and Austin visit San Diego.