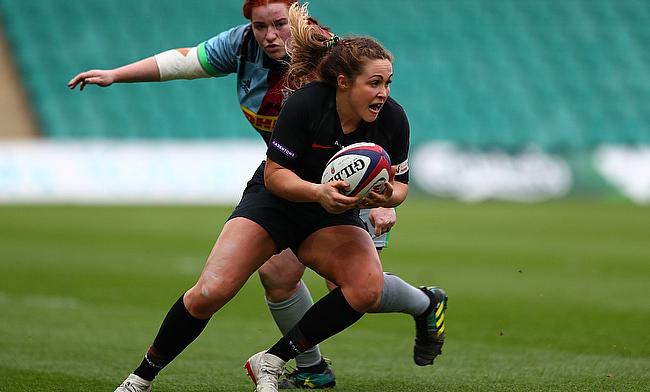 Leanne Riley: It’s the unknown we are having to adapt to
Looseheadz x Talking Rugby Union Podcast - Amber Reed
New dates for Rugby Sevens in Tokyo Olympics announced
We can learn a lot about ourselves in Hamilton - Lindsay-Hague

This has usually been an exciting time of the year for Sydney Gregson.

When spring and summer begin to overlap, it is easy to pinpoint noteworthy events which tell the story of the 24-year-old’s journey in the game.

In 2018, the England 7s star joined Tyrrells Premier 15s champions Saracens following a short spell over in Australia where she played for the University of Sydney.

Gregson’s debut season for Sarries then had a fairytale ending as the versatile back touched down in the Premier 15s final to help her side clinch another title against Harlequins.

The 33-17 victory came just over 12 months ago before her maiden bow on the World Sevens Series followed shortly after.

And yet another highlight in the calendar did beckon for Gregson this summer.

In truth, the possibility of representing Great Britain at the Olympic Games may have topped her recent list of achievements but the coronavirus pandemic forced Tokyo 2020 to be postponed.

“It was tough at first because those initial weeks, we didn’t know whether it was still going to take place or not and then it was eventually postponed,” Gregson tells TRU. “Of course, we were gutted because that was what we had been working towards all season, but we have to look at it in a positive way.

“We are quite a young squad so that extra year could almost be beneficial to us because it is another year where we can train together and work towards that goal. Although it is gutting, it almost can be a good thing.”

Earlier this year, Gregson, along with 13 of her other England teammates, had been included in Scott Forrest’s extended GB 7s squad after she returned to fitness to represent the Red Roses in Hamilton and Sydney.

The England 7s squad would have been preparing for visits to Langford, Canada and Paris this month, but rather than dwelling on the disappointment of not gracing the world stage, Gregson and her colleagues will be ‘back’ together this week for one very good reason.

She explains they will be raising money for two charities close to their hearts - Mind and Muscular Dystrophy UK- by all running one mile, every hour for 14 hours. “I was just chatting to one of the girls a couple weeks ago and she mentioned about the 12 miles in 12 hours challenge some people are doing and we thought that would be quite cool to do,” Gregson adds.

“I thought then that we should do it as a team to keep us connected, but also, it is a really nice thing to do to raise money for charity. We decided on 14 instead of 12 because that is the duration of a Sevens game and for the charities, Mind is a big one because mental health is a big thing in sport and Muscular Dystrophy UK is important to one of the girls because one of their family members was affected by it.

“We put the idea on the WhatsApp group and everyone just jumped on board and was really keen for it so it was quite nice. One of the biggest things for us was to help these charities. I think Muscular Dystrophy UK have been struggling due to the coronavirus so hopefully we can raise as much as we can to help as much as we can.”

The challenge will obviously test the squad’s fitness and Gregson admits she has been keeping on top of her training during this lockdown period: “I have got quite a good set-up with weights and stuff and there are loads of parks that I can go and run at!”

However, whilst ‘keeping fit’ has been a key message since the Covid-19 outbreak, it has also been a challenging time from a mental health point of view which is why Gregson believes England 7s’ initiative throughout Tuesday is also important.

“This period is obviously quite tough when you are used to working with the same group every day because you all become quite close and you get used to that,” Gregson says.

“The hardest thing is finding the motivation to do it all. It is kind of up and down to be completely honest. Some days I feel really motivated and some days I really have to push myself out the door.

“I think as a team and a group, we all keep each other motivated and try and push each other. Not having that is probably the hardest part so it is one of the reasons why we are doing the challenge together. We are quite aware that it is great to connect with each other and that is important to us all.

“I think we are planning a few Zoom sessions during the day just to kind of make sure everyone is still alive and still doing it! I think we are doing a quiz at the end or something like that just to celebrate which will be nice with the squad.”

At the time of writing, England 7s are only £105 short of their £1,000 target for Mind and Muscular Dystrophy UK so it is likely the squad will surpass that total throughout the course of the week.

For Gregson, having the charity Mind as one of the beneficiaries of the challenge holds great significance and her recent work with the foundation, Looseheadz, highlights this further.

“The guys at Looseheadz do brilliant work and it is important that people understand that,” she adds. “I think my main reason for helping them out is because mental health is quite close to my heart. I had a good friend who really struggled and I know sport was quite a big factor in that.

“It can be very difficult when you are at the top of the game and all the stress behind it and I think it is just so important for people to realise that a lot of people do struggle. It is OK and it is alright to talk about it and the more it is spoken about, the more natural it is going to be.”

With it being Mental Health Awareness week, it seems fitting Gregson and her teammates will be raising money for Mind as well as Muscular Dystrophy UK.

The gruelling challenge is set to begin at 7am on Tuesday morning and whilst 14 miles of running might not sound as appealing as scoring a try in a final or representing your nation at the Olympic Games, the sense of achievement will still fill Gregson with pride.

If you'd like to donate to England 7s Women's Squad, you can do so HERE