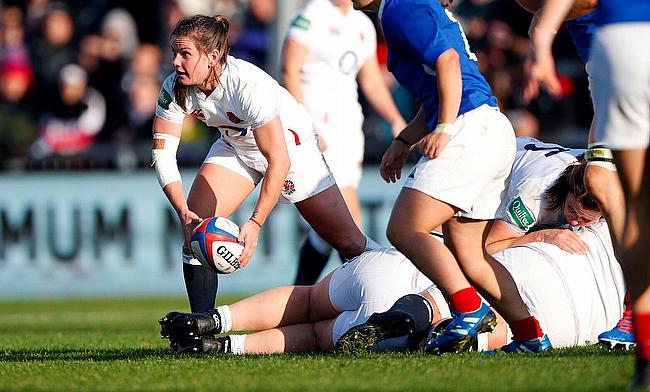 Richmond omission from Premier 15s ‘gutting’ - Kapo
Davinia Catlin: Excitement of being professional is definitely going to pull some players
Lauren Delany: I wouldn’t be where I am today if it wasn’t for Waterloo

Just eight weeks ago, Leanne Riley was leaving the field having started in England Women’s comprehensive 66-7 win over Wales.

Playing 55 minutes, on a day where England scored 10 tries at the Stoop, Riley is now leading Fitness Friday’s on Harlequins’ social media platforms.

Having made her 15-a-side debut for England in 2013, Riley has grown into the country's starting scrum-half and she is now one of the Red Roses' most consistent performers.

One of 28 female players to receive a full-time playing contract last September, Riley played a part in the Autumn internationals and each of England’s Six Nations games before the coronavirus stopped the world in its wake.

“It was a quick transition, coming from a camp environment, having my teammates around me and playing against one another,” Riley said, who has also played for Richmond and Saracens. “To then, literally going straight into lockdown, was a shock. I think I’m quite a proactive person, so I went out and got the majority of training equipment that I needed and I got it at just the right time.

“I’ve got asthma and a bit of a chest issue, so my partner has been really good, he’s been the one going outside, queueing up outside the supermarkets to do the food shop and that saves me from having to go outside and do that. It has been a bit strange, but you adapt quickly.”

As a way of thanking gyms allowing her to borrow equipment, Riley began posting her workouts on Instagram, tagging the relevant companies. Eventually, Harlequins asked if Riley would provide a weekly fitness class for fans of Harlequins Women’s.

After beating Wales 66-7 at the Stoop on Saturday, the Red Roses say that they will continue to drive the game forward.

“A load of key things have gone online and I’m sure Zoom is loving the amount of extra clientele and customers it has picked up through the video calling system,” Riley said. “It just made me think about what people are doing during this time, how I can help, how can I influence their work out and their daily routine.

“Obviously, everyone is in different circumstances, so that’s where the idea came from. I’ve done some circuit styles where you are going every minute on the minute, whether it is setting a 15 minute where you are just continuously working. I have really enjoyed it.

“It has been a nice challenge and it has been nice to do them myself as well, because you can run, you can play rugby and you think that by doing bodyweight exercises that we are conditioned to do that, but I have found that my muscles have given up quicker than my lungs, so it has taught me to train differently.”

First picking up a rugby ball at the age of 10 at Park Hill Primary School in Coventry, Riley was also a skilled netballer, representing Warwickshire at one point in her formative career. Nine years ago, she made her England U20s debut and now aged 26, the scrum-half looks set to play at her second World Cup.

With the tournament in New Zealand set to take place next September, the road to the showpiece event is more uncertain than ever before. Due to Covid-19, the international calendar has been jumbled and there are still question marks over when this year's Six Nations will be concluded and then, if the summer and autumn internationals even take place.

“Everyone is in different positions at the moment, but motivation I don’t think is a question for anyone,” Riley said. “Obviously, we don’t now know what our calendar looks like leading up until the World Cup, we should have finished the Six Nations, we should have had matches this summer, we should be going to Australia and New Zealand for the Autumn internationals, so all of that now, I assume is a question mark.

“Whether we even start the league in September is also a big question mark. It’s the unknown we are having to adapt to at the moment, which personally I am not very good at. I like knowing what my weekly schedule looks like, when preseason is.

“But it is something that we have all got to learn to deal with. The question marks are about exactly how the journey looks like. We’ve got to take it month by month and hopefully come September we’re into some kind of normality, whether that’s the competition itself or not.”