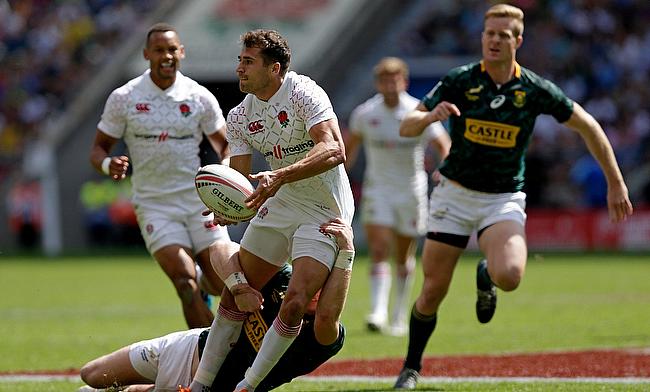 World Sevens Series: Hamilton Preview
World Seven Series: Cape Town Preview
Everyone has got eyes on Tokyo - De Carpentier
Wilson-Hardy: We have been chomping at the bit to get out there

So far, the start of England’s World Seven Series campaign has been a mixture of highs and lows. Finishing third in Dubai in the opening leg of the competition, their placing of 10th in Cape Town brought the team straight back down to earth.

Blighted by injury once more on the South African coast, England’s loss to Mike Friday’s USA capped off a difficult weekend for the side and losing experienced campaigner Richard De Carpentier meant they stumbled over the finish line last time out.

“We were definitely happy with the Dubai result,” England’s Ollie Lindsay-Hague said.

“We actually didn’t train that much in the summer because of injuries. There were a lot of boys coming back from injury, so they didn’t have any game time under the belt, se we ended up doing pretty well with third place.

“In South Africa, we wanted to do better. Like we do at every tournament, we wanted to win it, but things just didn’t go our way. I don’t want to make excuses, but we had a lot of injuries in that tournament. By the last game we had eight or nine players, which meant two boys on the bench.

ICYMI ??@robvickerman talks new coaches, formats and old rivals as he looks ahead to today's #NZSevens ??

“The way the game is now, it is so fast, intense and physical, the bench is so important. We obviously dropped off with our results. At least the boys did everything they could and put everything in to do as well as they could.”

Since Cape Town, there have also been movements with the back-room staff. Simon Amor, who heads up England’s 7s programme and will also serve as Team GB coach at this summer’s Olympic Games, has joined England’s XVs side as attack coach, leaving fledgling coach James Rodwell in charge for Hamilton and Sydney.

“It is an interesting time, an exciting time. It is going to be hard, everyone is really looking forward to getting out to Hamilton and Australia to get some good minutes under the belt and play some rugby.”

With Rodwell as head coach, England could certainly be in worse hands. Only retiring last year, Rodwell played in over 90 World Series legs and was a key figure in Simon Amor’s Team GB side that collected a silver medal in Rio nearly four years ago.

Lindsay-Hague was also a part of that Team GB squad in 2016 and has even been one of England’s most consistent performers. Playing alongside Dan Bibby and Tom Emery regularly in Dubai and Cape Town, the 29-year-old will now be reunited with Tom Mitchell in New Zealand and Australia over the coming weeks.

Your pools for this weekend's #NZSevens in Hamilton, round three of the men's #HSBC7s

Who are you backing for the win? pic.twitter.com/VyesfANc8V

“With the way tournaments are going, there are less games. It is exciting times in sevens, things are changing, so I guess we are going to have to change with it.”

After their 10th place finish in Cape Town, James Rodwell’s side have been drawn alongside Series leaders South Africa, a resurgent Kenya and hosts of the 2020 Games, Japan. Lindsay-Hague feels like getting out of Pool B will be challenging.

“South Africa, obviously, are more of a threat because they are skilful, as well as being physical and very organised, so we have got a very tough group. I mean, it is great to have these teams, test yourself against different opposition, so we are going to be tested of course, but this is going to be great learning for us with a massive year ahead.”

Having been such a constant for England so far this season, it is difficult to imagine a Team GB squad without Lindsay-Hague. The former Harlequins man is an exciting player to watch, capable of turning a game on its head on his own. Clearly aiming for a place on the plane to Japan, Lindsay-Hague is excited by the prospect of a second Olympic games.

“That’s the main goal for the year. To be in an Olympic team and medal, of course that is what every professional sevens player wants. It is such an exciting time to have an Olympics in the year. It is going to be a Team GB, so it is going to be exciting playing with all the talent in Wales and Scotland, fighting for those positions.”