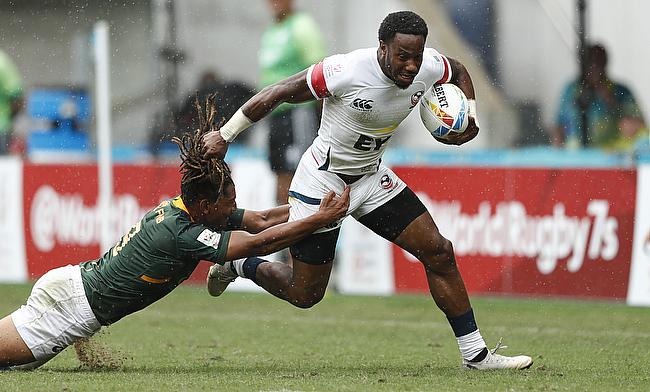 In an exclusive interview with Talking Rugby Union, Carlin Isles discusses the Black Lives Matter movement, why he spoke out about Drew Brees and preparing for Tokyo 2021.

Isles came to the game later than most.

It was in his early 20s that he first picked up a rugby ball, spurred on by Miles Craigwell, a former NFL player turned USA Sevens stalwart. A prominent athlete at high school and collegiate level, Isles excelled on the rugby field.

Quickly dubbed as ‘the fastest man in rugby’, he thrived in the sevens format of the game. Outstripping his opponents and scoring tries for fun, the back quickly became the face of the sport.

Taking a break from the rugby in 2013 to take a place on the Detroit Lions training squad, he then left the NFL side early in 2014 to play for Glasgow Warriors on a short term contract, which at its conclusion, saw Isles return to America to carry on playing for the USA Sevens.

An extremely high performer for the Eagles, Isles credits his continued ability to be one of the best players on the series to his motivations. If you look at the 30-year-old's social media pages, they are a gallery of his training sessions, each done with the aim of making him a better athlete for when the big occasion comes.

“You have got to realise that I was only playing for three months when I first got on the scene and I had to do everything in front of everybody,” Isles said. “Mistakes, criticism, the growth and I always knew who I was and with my work ethic, I was always confident I knew who I was and who I am, regardless of anybody else’s outside opinions.

“That’s why I was always ready, because I always prepared myself. When it was time for me to shine, time for me to show I am ready, big hats to my ability to stay disciplined, my ability to build good habits when I was younger and keep that going throughout my whole career, because without that, I don’t think I would be where I am today.”

That theme of adversity and having eyes on him is one that Isles knows all too well. When he was adopted by his parents as a seven-year-old, Isles was placed in an all-white school, something that he says drove him to be as successful as possible.

“A lot of people had never saw a black person in their life,” Isles said. “I had to watch what I said, watch what I did, because I was under the microscope. I remember in high school, something this girl told me, and I wrote it down on a note. She said I wouldn’t be nothing in life because I am black, and I am dumb. I remember that and I remember that to the tee.

An advocate of the Black Lives Matter movement, Isles spoke out when NFL quarterback Drew Brees said that he did not support his teammates and opposition kneeling during the national anthem. Instead of criticising the Super Bowl winner, Isles instead chose to forgive the 41-year-old, citing extreme reactions to the comments as part of the wider problem.

“Here’s what kind of sucks, people get to a point where, especially with Drew Brees; one, people don’t lack to understand and two, people don’t like to forgive,” Isles said. “Now, people hate Drew Brees or they cancel Drew Brees and now they are mad. If you listen to what Drew had to say, I don’t think he fully understood the concept of what was actually going on and it didn’t make sense for what was going on in the world and what he said.

“So, people lack understanding and then they get mad and bitter. Now you are carrying all this hate, this bitterness on your heart and when people have that on their heart, they act out of character. Because they get bitter, they hurt somebody, they kill somebody. But, when you forgive and you understand, you don’t carry that in your heart.

“I am not going to be the one mad at Drew Brees, why would I be mad? He don’t know me, so I forgave him. I don’t carry that in my heart and that’s what the world needs, forgiveness. Drew Brees isn’t perfect, I am not perfect. Everybody has done or said something that is stupid, that they shouldn’t have or thought about, so why should I sit here and criticise and judge you when I am not perfect? That’s that.”

Of course, Isles is not the only person to have used his social media platform to help influence people. With an impending election in the United States, we have seen NBA heavyweight LeBron James start a campaign encouraging young black people to come out and vote. After so much unrest throughout the leadership of President Trump, the campaign is one that has caught the imagination.

“It is important to use, especially if you have got a platform, to use that to your advantage and get to people that you can reach out to and people who are inspired by you, look up to you and get them to go out and vote,” Isles said. “Get them to support a good movement, because if we can get more people, that’s what matters at the end of the day.”

Early on in the coronavirus pandemic, it was confirmed that the 2020 Olympic Games would be postponed to next year. At the close of June, it was announced that the remainder of the 2019/20 World Sevens Series would be cancelled, allowing squads and athletes to focus on their preparations for the Games.

For Isles. the goal remains the same. In 2016, the USA were unable to make it out of the pool stages, but in the past four years, Isles and his teammates have had an upturn in fortunes. Last season. the Eagles placed second overall, securing their place at the Olympics and Isles was the top overall try scorer, crossing the whitewash on 52 occasions.

“Dominate.” Isles said, when asked what his intentions are at the Olympic games. “For us to dominate as a team and then me just show out individually. My confidence goes into my process, I am all about my process. I don’t really worry about the end result. If I have killed the process, going to Tokyo 2021, I am going full steam because I have prepared myself, I own the process and I’m going to be really confident because of that.”

This contant has been brought to you in partnership with Harkness Protect. Harkness Protect offers a wide range of PPE that could help your business reopen, to learn more visit the website or read this article.