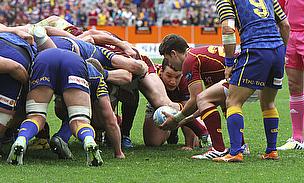 The 14th round of Super Rugby featured an unprecedented number of upsets, some crucial refereeing calls and only one obvious result as most tipsters were left tearing their hair out by the end of the round.

Most tipsters were starting to get a gauge on Super Rugby form and potentially got a little complacent before getting the carpet pulled out from under them during this round.

Sure, we have come to expect an upset or two in each round, but in round 14 there were four upsets out of six matches with the Hurricanes, Crusaders and Reds losing at home and the Brumbies losing away all as favourites.

Each of these results was picked by twenty percent of tipsters or less, while the Stormers thrashed the hapless Force by a bigger than expected margin in a match which split the tipsters.

Luckily for most tipsters the Waratahs thrashed the Lions at home by 28 points, to restore pride to most tipsters and avoid the big donut for the round.  That is why you can never be too confident in tipping Super Rugby results.

Six points to note from Super Rugby Round 14

1) The referees and / or assistant referees had plenty of input and effect on results in Super Rugby Round 14.  The Hurricanes and Reds both feel ripped off by refereeing decisions which potentially cost them victory, while the Sharks victory over the Crusaders was all the more remarkable given that they did it with 13 or 14 players for long parts of the game.  It is amazing how the referee or the bounce of the ball can influence the result of a match.  All three of these games were close.  What did you think of the refereeing in Super Rugby Round 14?

2)  The home teams have been winning approximately seven out of every ten matches in Super Rugby 2014, this fact was lost on people who picked the Hurricanes, Crusaders and Reds to win the first three games of the round.  The South African home teams both defied Super Rugby 2014 table position to beat two high flying Australian teams and cause more headaches for tipsters.  By the end of the round the home team won three out of six or 50 percent.

3)  The margins - Picking the margins and being the closest person in your conference is crucial.  There were four out of six games where a team won by seven points or less, while the Stormers not only beat the Force, but they won by 16 points and Waratahs won by 28 points.  If you were astute enough to pick the winning margins for the Waratahs or Stormers victories and be the closest in your pool then it will have turned a poor weekend into a relatively OK one.

4)  Daytime matches in Australia always result in plenty of points and tries hence why my pick of 28 points was right on the money.  Teams can throw the ball around during the daytime and score plenty of tries, just ask the Crusaders who did that to the Reds recently!

5)  The Super Rugby placings took a real shake up over the weekend.  Most teams only have four or five games left in Super Rugby 2014 and plenty of them are local derbies.  This means that some teams will be knocked out of contention by their local rivals.  The Sharks did the New Zealand teams a favour by beating the Crusaders, while the Highlanders find themselves joining the Chiefs and Crusaders in the Top Six courtesy of their win over the Hurricanes.  The Brumbies and Force have lost ground on the leading Sharks and the Force have slipped outside the Top Six.  With the Cheetahs and Stormers winning, the preseason predictions of the Lions and Rebels being towards the bottom is coming true, although the Reds are last at the moment.  The Top Six is relatively predictable with the exception of the Highlanders being in there.  It would be great for the competition if either the Highlanders or Force made the Top Six as a bit of a wildcard.  Anyone below the Bulls in 9th position look to be gone for Super Rugby 2014.

6)  The great thing about playing SuperBru is that your performance is often relative to your opponents.  Most tipsters picked either one or two out of six in Super Rugby Round 14 compared with the previous few rounds where tipsters were getting around 80 percent right rather than wrong!  This means that even if you had a shocker, then you probably didn't lose much ground as we are all in the same boat.  To show you what a bad weekend it was, Shaka grabbed the yellow cap in the Super Rugby Tips conference with six points overall and moved up only five places.  Even picking the winner, margin and being the closest tipster will have gained you ground.  The Stormers win over the Force was almost a fifty fifty split of tipsters, but because of the relatively high margin, even if you went for the Stormers you wouldn't be majorly advantaged.  For the record, JC holds lead at the top of the table, while The Chosen One is now up to 7th.