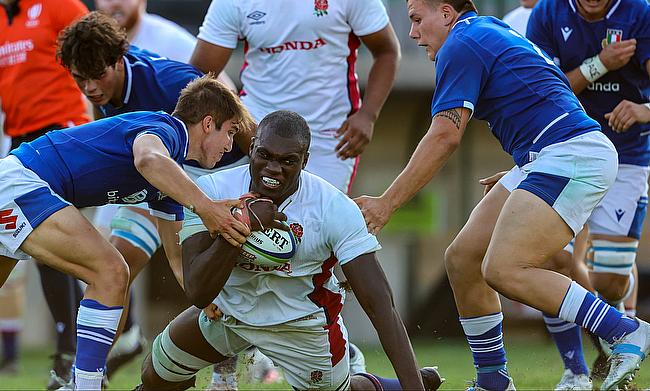 'Winning 2-1 against Australia will be even more special than 2016 series win' - Jack Nowell
Wales to wait on Dan Biggar's fitness ahead of deciding Test against South Africa
McConnell is on a learning curve, but the 18-year-old is impressing many
Thompson aims to seize 'great opportunity' on South American tour

It seems nowadays that the rugby calendar never stops and between June 24 and July 12, the best young male players from these shores were playing in Italy in the Summer Series 2022.

The under-20 stars from England, Scotland, Wales and Ireland will now have a well-deserved break before they begin their pre-season training ahead of 2022/23 with their various clubs - and they will have mixed memories of the tournament in Treviso and Verona which also featured South Africa, Italy, France and Georgia.

So, how did the Summer Series end on Tuesday in the Stadio Comunale di Monigo?

Wales did well to win Pool B ahead of Italy, Georgia and Scotland, but they were overpowered by Pool A toppers South Africa 47-27 in the final.

South Africa No.8 Nel’s barnstorming carry saw him go over for the opening score after six minutes. Stand-off Sacha Mngomezulu slotted the conversion before Wales skipper Joe Hawkins kicked a penalty only for front-rower Nathan Evans to then see yellow for a tackle in the air.

Soon after. replacement hooker Lange then made an instant impression with a converted try before centre Hartzenberg scored the Boks' third of the day.

Lange then found himself in the right place at the right time again to score his second and South Africa led by 23 points at the break.

Wales hit the ground running in the second half and centre Grady went over.

Fancy footwork from centre James saw him dart over, but Wales rallied late as replacement Westwood touched down after a grubber kick from centre Joe Hawkins before back-row Fackrell and replacement Jones finished things off.

Italy impress in win over England

Italy had beaten England at the same venue in the age-grade Six Nations earlier in the year and they completed the double here.

Scores for hooker Tommaso Scramoncin, No.8 Ross Vintcent, winger Filippo Lazzarin and a penalty try - plus seven points from stand-off Nicolo Teneggi - were enough to give Italy a 29-19 lead at the break, despite England crossing through scrum-half Tom Carr-Smith, hooker Ollie Fletcher and winger Iwan Stephens.

After the interval, a Teneggi penalty and a drop goal from full-back Lorenzo Pani put Italy 16 points to the good, but tries for England skipper Emeka Ilione and replacement Tom Lockett ensured a nervy finale.

France and Georgia finished third in their respective pools and it was the former who came out on top in this one 44-17.

Georgia raced into a 10-0 lead, however, winger Gatien Masse’s double and a score for hooker Benjamin Boudou on the stroke of half-time saw France up 17-10 at the interval.

The Georgians had already had a player yellow carded late in the first 40 minutes and then France loosehead prop Thomas Moukoro was sent off for a dangerous tackle just after the restart.

France also lost two men to the sin-bin at different points during the second period as the game threatened to boil over, but Moukoro’s absence seemed to galvanise them as they came through by scoring some cracking tries.

After winning the Six Nations Grand Slam earlier in the year, Ireland’s players were frustrated to finish bottom of Pool A.

And they took that frustration out on winless Pool B outfit Scotland here, racing into a 24-0 lead after just 16 minutes.

In the end, they came out on top 41-24 and their skipper Reuben Crothers, the back-rower, said: “During this tournament, we have been a bit slow to come out of the starting blocks, so there was a big focus to start fast and try and take the game away from Scotland and I’m glad we did that.

“It’s weird that it’s over. It has been a long season for us but we’ve had a successful one. We won a Grand Slam and have beaten England twice in one year.

“I couldn’t be prouder of the lads and what they have produced all year and to top it off with a win makes it special. It has been a great honour to lead the lads and they should all be very proud of themselves.”

Scotland have lost all nine games at this level in 2022 and head coach Kenny Murray said: “I had my head in my hands at times as it was a really disappointing start against Ireland, but the boys showed a lot of spirit to get back into the game.

“We need guys in full-time rugby environments because we are comparing apples and pears when we bring them back to international level.

“That’s the playing field now. We are not playing against amateur rugby players who are training once or twice a week, those days are gone.

"We need to be a lot better. We’ve got to be honest, we are way off it. I think physically we are struggling at the moment when I look at the other teams we are up against.”