Stuart Hooper and Bath are not shying away from their ambitions 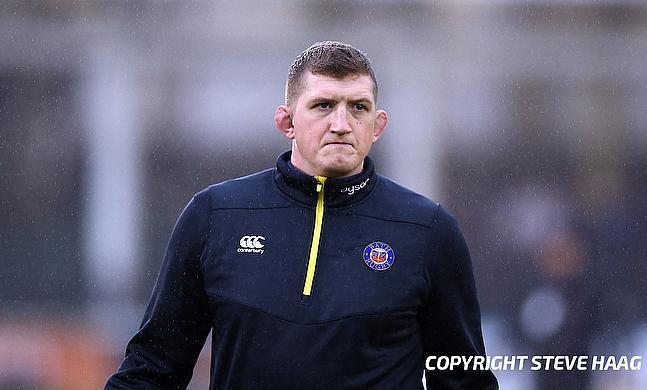 There was certainly no whispering from Stuart Hooper at Bath’s media session this week. The message from the club’s Director of Rugby was clear and there was no shying away from focusing on the bigger picture.

“We want to make sure we are there at the end and we want to be competing to win this thing,” was Hooper’s response when asked about Bath’s ambitions for the remainder of the Gallagher Premiership season.

Before his side began their return to action last Saturday, Bath sat in sixth place and by the time they kicked off against London Irish, they had fallen to eighth.

However, once the curtain came down on the weekend’s rugby, the Blue, Black and White found themselves in fifth position and now they are firmly in the race for a top four spot.

There may well have been a collective sense of satisfaction at the Rec following Bath’s 34-17 victory over the Exiles, with Hooper’s charges showcasing a clinical edge as well as some exceptional moments from Jonathan Joseph and new recruit, Ben Spencer.

With this in mind, Hooper’s choice of words on Thursday came as no surprise and Bath will be keen to maintain their momentum when they take on Leicester Tigers this afternoon.

“What we did last week was put ourselves five points and one win closer to our target, that’s all,” Hooper told the media ahead of his side’s visit to Welford Road. “We restarted and this week is another opportunity to get another win closer and another number of points closer. We take that mentality into it. We understand where we are heading and how we are getting there, but we go moment to moment to get there.”

Following the buzz surrounding the Premiership’s restart, the next block of games for all 12 clubs is arguably more intriguing. As luck would have it, there are several fixtures taking place between the current top six sides over a nine-day period and for Bath, the end of this month could shape the rest of their campaign.

After their trip to Leicester, Hooper’s men travel to Franklin’s Gardens to face Northampton Saints (6th) under the lights before they return home to take on Wasps, who have moved up to third following their victory over Worcester on Friday.

“By the time you get to the end of this block, you’re 50 per cent of the way through the games,” Hooper added. “There’s only eight regular league games left now so it does have an impact on this season because of the quantity of games that come in this short period of time. You have got to get out of the blocks and get points on the board.”

One of the obvious factors which will challenge sides during this intense run of matches will be squad management. Earlier this week, the Professional Game Board released a number of directives focusing on player welfare and Hooper was keen to stress that the health of his side is ‘absolutely paramount.’

It is likely we will see more rotation from Bath’s Director of Rugby over the course of the next week, but he and Neal Hatley have only opted to make two changes for their meeting with Leicester Tigers.

Unsurprisingly, Ben Spencer remains at scrum-half after a highly impressive debut for Bath, in which the England international scored an early interception try to help his new club to victory.

“He [Spencer] expects that [high standards] of himself and we expect that of him,” Hooper added.  “When we were in conversations with Ben about how is game could grow at Bath and what he can deliver to us, I think he showed a solid start in that regard.

One of Spencer’s fellow international teammates, Ruaridh McConnochie, also keeps his place in the starting XV and he was extremely pleased with the way his new number nine hit the ground running at the Rec.

“Spenny has been awesome,” McConnochie said. “He brings that international class at scrum-half. He has really taken hold of things in attack. We want someone of his quality driving everyone else up.

“His kicking game adds a whole new dimension to our game. It was awesome to see him back up good training performances with an incredible match performance last weekend and he thoroughly deserved that man of the match.”

McConnochie, himself, admitted he hasn’t been overly satisfied with his own individual performances since returning from the World Cup in Japan, but it is easy to forgot the 28-year-old is still relatively new to the XV-a-side game. The winger/full-back made the transition from sevens to the longer format of the game in 2018 and after a breakthrough season in the Premiership, McConnochie found himself part of Eddie Jones’ England plans.

The journey from 7s to 15s is something which we may see more of over the next few months following the RFU’s decision to drop their sevens programme.

??With the future so unclear for England's Sevens stars, @Dan_Norton4 spoke to TRU about how he and his teammates are hoping to move forwards.

You can read the interview with sevens top try scorer below ??https://t.co/irCU9Kbwr2 pic.twitter.com/fc13uCKdN4

One of their stars, Dan Norton, has already confirmed his move to London Irish and having spent three years with England Sevens, McConnochie has sympathy for his former colleagues.

He added: “My time in 7s put me in good stead coming into 15s and I think there is still that stigma of sevens players making that transition and I think you can get a lot out of them so hopefully as many of those guys find a club as soon as possible. It is horrible and gutting what has gone on with them and that is not just the players, that is the whole programme.

“To be told like that with such short-term information, I think has put them in quite a tough spot. There’s a lot of really good people there.”

McConnochie experienced the high of winning an Olympic silver medal with his England teammates in 2016 when Team GB finished runners-up in the sevens competition in Rio, and now the versatile back will be keen to taste some success in 15s.

With eight games to go, Bath's first stop sees them travel to Leicester and if they gain a positive result against their old rivals, one of the Premiership’s most decorated teams would be another step closer to their target.

“The key thing is with Leicester, having been involved in rugby for a long time as an opposition player and staff member against Leicester, is that there is always an expectation on the Leicester Tigers and what they can deliver,” Hooper added.

“Our guys have prepared hard and something which we have focused on in this period of time is that we make sure we look after ourselves.

“I think it is never truer than in this period. If you get caught up in the opposition and what will work one week and not the next, you all of sudden are not developing as a team. We have to focus on what we do and deliver what we need to deliver.”