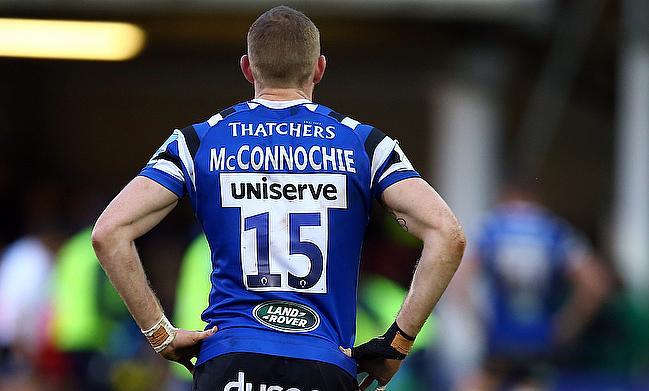 A former England Sevens player, who won silver with Team GB at the Rio 2016 games, McConnochie only came back to the 15-a-side game in 2018 and could now be representing his country at the World Cup in Japan in September.

However, McConnochie’s talent was not realised until late on. At the age of 19, having taken a year out to play in New Zealand, McConnochie went to the University of Gloucester where Head of Rugby Mark Jeffreys, now of Birmingham City University, was shocked that the player had never been picked up by an academy.

“I remember Ruaridh as a first year,” Jefferys started. “A huge amount of talent. He had come back from spending a year in New Zealand, had never been picked up on a talent pathway anywhere before, but had a huge amount of talent and, probably more importantly, just had an amazing attitude.

“He wanted to learn, wanted to get better and he’s just one of the nicest guys that you could ever meet. He stood out straight away as soon as he arrived at the university and things just started to progress from there really.”

Former Nuneaton coach Phil Llewellyn was at the University of Gloucester at the time as a mature student, but also served as a coach with Jeffreys. Llewellyn was also involved with the England Students set-up and recommended McConnochie to that programme.

Eventually McConnochie was selected for GB Student Sevens for the World Championships in Brazil. It was there that the back was picked up by Simon Amor and the England Sevens programme. Three years on the World Series soon followed as did an Olympic silver medal as well as a bronze medal at the Gold Coast Commonwealth Games in 2018.

McConnochie was mainly involved with Bath’s ‘A’ side at the start of last season, but eventually broke into the first team due to injuries sustained by Joe Cokanasiga and Semesa Rokoduguni. The versatile back may even have to stave off opponents from his club in order to guarantee himself a seat on the plane to Japan.

“It's nice & quite humbling to be mentioned and you just have to wait and see, but I know it's just from a media point of view!"

“That just shows the strength and depth that Bath have currently got in that area,” Jeffreys said. I think that he has probably learnt a lot from those guys as well (Watson and Cokanasiga).

“I think that when you are in a good environment, you are competing against guys, but you are learning off everybody around you as well. That’s what a good coaching environment is about.

“It’s funny, me and Phil have had a number of conversations over the years (about McConnochie), that whenever he has stepped up to something new, he’s always looked really comfortable straight away. Which I think says something about the ability he has got, but that work ethic is second to none. He’s a really grounded guy to go with it as well.”

Whilst the likes of Scotland and New Zealand have regularly developed players through their sevens programmes to play the 15-a-side game, England have not done as much. Even if McConnochie weren’t included in Eddie Jones’ squad on the 12th of August to fly to Japan, the Bath winger will have already proven himself to be one of the best English players to have transitioned from sevens to XVs.

Jeffreys, who coaches the England Universities Women’s Sevens side, believes that England could use sevens as a way to develop even more players for the 15-a-side game: “I think sevens is a tremendous training ground for XVs players and over the years New Zealand have done that really well and I don’t think that in this country we’ve nailed that yet.

“The skills that they learn at sevens, you’re catching, passing, tackling, breakdown skills, are all so important in sevens and they are highlighted far more than normally. Investing in the sevens programme, both for its own merit and for the merit of producing XVs players, is something that all of the home nations should be doing really.”

Ruaridh McConnochie dances along the touchline to complete an excellent score.

A crucial moment for Bath! ?? pic.twitter.com/I7TQ5Skf5a

Jeffreys admitted that he was wary of McConnichie’s prowess on the wing, especially when coming up against the avid Welshman’s home nation this Sunday. Secretly he is hoping that his former player will score three tries, but Wales four.

It seemed prudent to ask Jeffreys whether he had any advice for McConnochie, but the Welshman’s answer was fairly simple: “I think that he’s doing everything right. For him, it’s just a case of learning from all the environments that he’s been put in.

“Not only has he had the opportunity to be part of a fantastic environment in Bath, but now he’s had the opportunity to experience a full World Cup training camp for a good couple of months. Knowing the type of guy that Ruaridh is, I’m sure that he’s lapped up every minute of it and will have benefitted from it.

“I don’t think I’ve got any words of wisdom for him. Apart from just keep doing what you’re doing. Keep learning where you can and just keep working hard which is exactly what he’s a