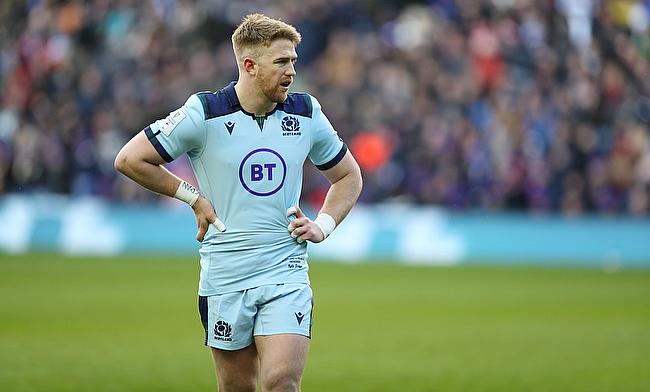 Kyle Steyn enjoyed his first international cap, but now he is striving for more
©David Gibson/FOTOSPORT

Kyle Steyn admits he has his eye on a summer tour place to the country where he grew up - South Africa - after he earned his first full Scotland cap in the win over France.

The 26-year-old has had a rapid rise to becoming Scotland’s 1109th men’s internationalist, joining the country’s core sevens squad back at the start of 2018/19 and going on to star for Glasgow Warriors since then.

The strong running centre/wing, who was born in Johannesburg and studied at the University of Stellenbosch, qualifies for Gregor Townsend’s men through his Glaswegian mother Gillian.

And, having been in and around the extended squad since last year, it was a dream come true for him when he was brought on off the bench during the last quarter of Sunday’s 28-17 triumph over 14-man France at BT Murrayfield.

Now he will have his head down in training this week hoping to be part of the match day 23 that travels to Cardiff to take on Wales this coming Saturday.

Then it will be a return to the Warriors for the Guinness PRO14 run-in, but Steyn will also be thinking about touring South Africa with Scotland for their next Test matches come July.

The Scots will face the world champions in Cape Town and then Durban and Steyn told TRU:  “To have the family there and just have a crack against South Africa would be pretty good, I’ve played against tons of the Springboks players before, but to do it with Scotland [and tour there] would be special.

“You wonder if you’ll ever get it [a Test cap], so to get my first one in front of that crowd at Murrayfield on Sunday was surreal, it was awesome.

“For sure it has given me the taste for more. To get 12 minutes as I did against France you then want to be out there doing it for 80 minutes.

“Gregor told me last Monday night, the squad was getting announced [to the players] on the Tuesday so he pulled me aside and told me I’d be on the bench.

“During the actually game I had absolutely no idea if I’d get on. When it got to 62 minutes, France were coming back at us hard, the rain was coming down and we were camped in our ‘22’ and I thought ‘I wonder if I’m going to get on?’.

“Then when Rambo [Stuart McInally] went through and scored our third try I was chuffed because I thought I would get on then.

“It was awesome to settle the nerves and to join the club [of full internationals] and it’s done wonders for our campaign. We now have a good opportunity to go down to Wales and give a real crack at Cardiff.”

“Dad was there, along with loads of cousins!”

As soon as he got the nod that he would be involved in the round four Six Nations clash with the French, Steyn contacted his parents back in South Africa.

“They were actually asleep as South Africa is two hours ahead, but I just sent mum and dad a WhatsApp message saying I’m playing at the weekend,” Steyn, who was given the honour of lifting the Auld Alliance Trophy alongside 50 cap Fraser Brown by skipper Stuart Hogg, explained.

“Dad managed to come over to Edinburgh for the game, he was the only one who flew over from South Africa and there were tons of cousins [in the stadium] too.

“George Horne and I are good mates so he was the first guy I told when I got the message on the Monday night.

“When it was officially announced to the group on the Tuesday the boys were great and gave me a tap on the shoulder saying ‘best of luck, congrats’.

Incredibly proud day earning my first cap today ??????????????. My gran passed away at the beginning of the week so it’s been one of highs and lows to say the least but the support throughout has been incredible. Chuffed to be able to celebrate Granny and share the field with this group of men. Congrats as well to Fraz on his 50th, glad I could share it with you pal. #1109

“During the week leading up to the game I was rooming with Allan Dell. He’s obviously also originally from South Africa, so that was really good and he helped me prepare for the occasion.

“I got a text from [assistant coach] Mike Blair and Gregor gave me a book to read with a message written inside. When I got on the pitch, I suppose I needed just one involvement to settle in, it was good to get a kick chase.

“It was a difficult part of the game to be involved in, there was a lot of back and forth and a lot of kicking.

“We knew France were going to come out hard in the second half. You can’t play Test rugby with 14 men and think you are just going to creep your way back in.

“We knew that and they put up a good fight, but the boys did well to keep us in that fight and it was great to play my part."