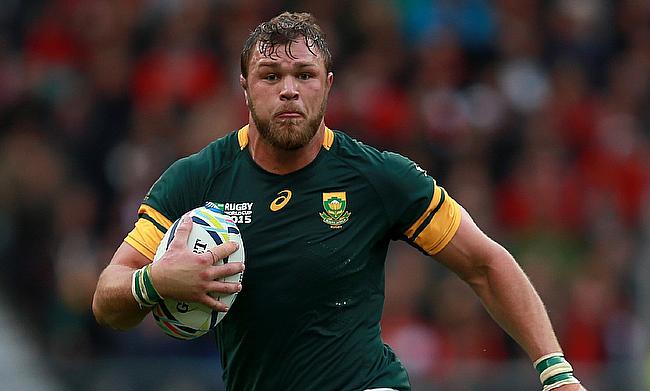 Duane Vermeulen is back in South Africa line-up
©PA

South Africa director of rugby Rassie Erasmus has made 10 changes to the starting line-up for the upcoming World Cup game against Italy to be played in Shizuoka on Friday.

Schalk Brits, who led the Boks against Namibia has dropped out of the matchday squad with Siya Kolisi returning back and he will be part of the back row that also has Pieter-Steph du Toit and number eight Duane Vermeulen.

Man of the match in the previous game Lood de Jager has retained his place in second row that also has with Eben Etzebeth while Tendai Mtawarira has also managed to keep his place with hooker Mbongeni Mbonambi and prop Frans Malherbe in front-row.

Elton Jantjies and Herschel Jantjies have also made way for Handre Pollard and Faf de Klerk at fly-half and scrum-half respectively while there is also return for Willie le Roux, Cheslin Kolbe and Damian de Allende.

“Italy have a very good pack and put a lot of effort in their set phases,” said Erasmus.

“People may think it is a gamble to have only two back replacements but we want to have plenty of ammunition for what is likely to be a major forward battle.

“It’s a 23-player game these days and the players who come on will be expected to contribute almost as much in game time as those who start among the front rowers.

“But for this game we are asking the players we have chosen to start to set the tone.”