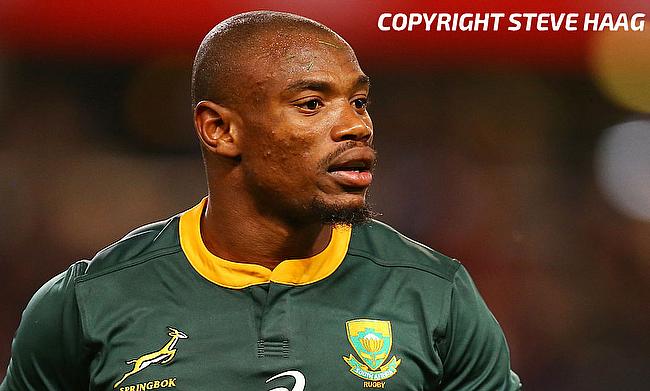 South Africa came up with a clinical display as they scored nine tries to trounce Namibia 57-3 in the second round of the World Cup at City of Toyota Stadium on Saturday.

Bongi Mbonambi and Makazole Mapimpi scored two tries apiece while Francois Louw, Lukhanyo Am, Warrick Gelant, Siya Kolisi and Schalk Brits were the other try scorers as the Springboks registered their maiden win in the tournament.

Rassie Erasmus' men started the game brightly when Brits touched down early but was ruled out by the TMO after television replays showed a knocked on during the build-up. Nevertheless, the first points in the game came in the 10th minute when Mbonambi crossed over following a lineout drive and Louw also went over the line in the 15th minute as they raced to a 12 point lead.

Namibia suffered a setback when Adriaan Booysen was yellow-carded for a deliberate knocking down and South Africa immediately capitalised on the advantage with Mbonambi crossed the whitewash and conversion from Jantjies made it 19-0.

Cliven Loubser helped Namibia break the shackles with a penalty goal in the 24th minute but the Springboks claimed the bonus point with Mapimpi dotting down in the 27th minute and they went into the break with a 31-3 scoreline following Am went over the line after a build-up from Brits.

The Boks were quick to get off the block in the second half with this time Am helping Warrick Gelant to go over the line in the 48th minute and five minutes later Brits produced an inside pass allowing Mapimpi to dot down. Kolisi, who came off the bench in the 53rd minute scored South Africa's eighth try in the 59th minute.

Things went from bad to worse for Namibia with Aranos Coetzee also yellow-carded in the 64th minute for a shoulder charge on Brits before the Boks skipper crossed the whitewash at the start of the third quarter to complete a 57-3 win.

"All in all, a great performance from the boys..."@Springboks captain Schalk Brits gives his thoughts after his side beat Namibia 57-3 at #RWC2019#RSAvNAM pic.twitter.com/a2B4y6AymV

After an impressive performance in #RSAvNAM, the @mastercard Player of the Match was Lood de Jager for @springboks