Slow start costed us the game against Saracens - Rob Baxter 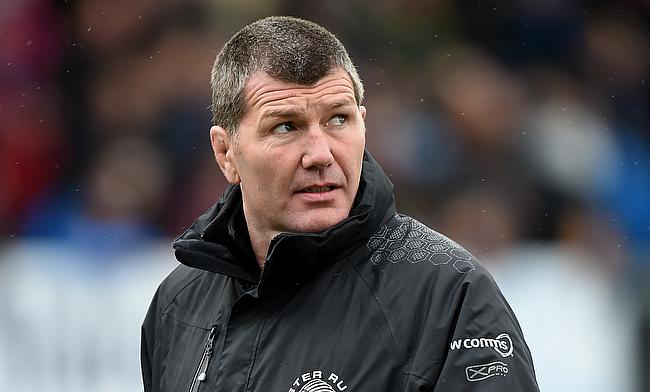 Exeter Chiefs head coach Rob Baxter admitted that his team allowed pressure to build over them after a sluggish start in their Aviva Premiership encounter against Saracens at Sandy Park on Sunday.

Exeter Chiefs managed to score only two penalties in the first half as compared to the Sarries, who raced to a 12-6 lead with tries from Alex Lozowski and Sean Maitland.

Things never went to plan for Baxter's men as they conceded a penalty and a couple of tries between the 53rd and 62nd minute and eventually succumbed to a 13-34 defeat to the defending champions.

"We paid for a slow start and conceded soft tries by missing easy tackles, which made it very difficult for us. We lacked a bit of physical edge and you pay the price against a side like the Saracens,” said Baxter.

"We did make individual errors and had little moments of losing focus. There were some good individual performances but we weren't able to tie it all together."

The Chiefs are languishing at the bottom of the table after losing both their games but Baxter believes there were few positives the team can carry forward from their clash against Saracens.

"The territory and possession statistics will be very much in our favour and I don't think we were miles away from a losing bonus point," he said.

"We matched their intensity after the first 20 minutes but their major players played very well for them."

Exeter Chiefs upcoming clash will be against Harlequins at Sandy Park and the 45-year-old wants to test the ability of the team to bounce back from successive defeats.

"We are bottom of the league and we've got a good team coming here next week. It is interesting to see how we react after two defeats as we are bound to be a bit edgy."