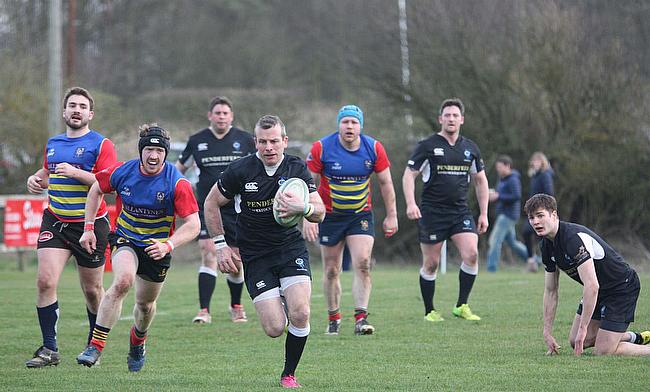 Inkster: 'I was shell-shocked when I got the call to play at the Melrose Sevens'
'Rugby means a lot to the town' - We explore North Berwick’s role in producing rugby stars
'To win the Melrose Sevens was just amazing, thinking about it brings a big smile to my face!'
From Calderglen to Murrayfield - Scotland lock Jonny Gray’s journey to winning his 50th cap

Andrew Skeen has played at BT Murrayfield before for Scotland Sevens and Melrose, but the 35-year-old could not be more excited to be heading back to the national stadium this Saturday to represent his hometown club Berwick.

‘Silver Saturday’ as it is known is the culmination of the amateur club season in Scotland, six finals being played across the day in Edinburgh with three men’s and three women’s matches taking place.

Berwick have reached the Men’s Shield final against Greenock Wanderers.

They made it this far by defeating Hawick Harlequins 34-26 in the Borders Shield final back in February and then, in the national event semi-finals, got the better of Royal High at the end of March.

The Shield success has all come on top of the team from Scremerston winning the Tennent’s East League Division One title - having won 18 and drawn one of their 19 matches to date - while they held a very successful sevens on Sunday just past.

Skeen, a playmaker who has mainly played outside centre this term, began his career at Berwick as a youngster before going on to play for Melrose, Watsonians and Kelso in higher divisions as well as having a spell in Italy.

He was also part of the Scotland Sevens set-up for a number of years, but last summer decided to return to Berwick and he has loved it.

“I always said that I wanted to end my career back at Berwick, so last summer seemed like the correct time to head back to the club and I have really enjoyed it,” the 35-year-old told TRU.

“It is, and always has been, a brilliant community club and the first XV there is a really good mix of younger players making their way in the game alongside a few older heads.

“I see my role in the team as trying to help the younger players through games, help them learn and help them enjoy their rugby as much as I have over the years.

“There is nothing better than winning trophies with your mates, so for us this season has been really excellent.

“I have played at Murrayfield before, in fact the first time I did was with Berwick under-18s back in the day when we were beaten by an Ally Hogg inspired Stirling County.

“Since then I have been back with Scotland Sevens and with Melrose [when they lost the 2013 Cup final 28-23 late on against Ayr] and those were great occasions, but getting the chance to go there with the Berwick senior team is a really special one for me.

“I have just been telling the younger guys to really enjoy the experience and take it all in because you never know when you will get to play on a stage like this again.

“It will be a tough match against Greenock, but we will give it our best shot out there and just see how things go.”

As well as playing XVs for Berwick, dual-registered Skeen has represented Watsonians on the Sevens stage in recent weeks.

There is not much that he does not know about the abbreviated game - he has won the overall Kings of the Sevens title four times before, twice with Watsonians and twice with Melrose - and he is looking forward to the run-in.

“There are five tournaments left on the Kings of the Sevens circuit for 2019 and it is all to play for,” Skeen said.

“With Watsonians I managed to win the Berwick Sevens on Sunday which was nice because it was on my home turf and it also kept us right in the title race.

“Due to the Shield final, I will obviously miss this weekend’s Langholm Sevens, but hope to be back in for the last four events and I think things could go right to the wire.

“It is great to see clubs like Boroughmuir and Edinburgh Accies doing well on the circuit and when you throw in the likes of Melrose and Jed it is going to be exciting.”