Loughborough programme can be ‘the best’ in women’s rugby 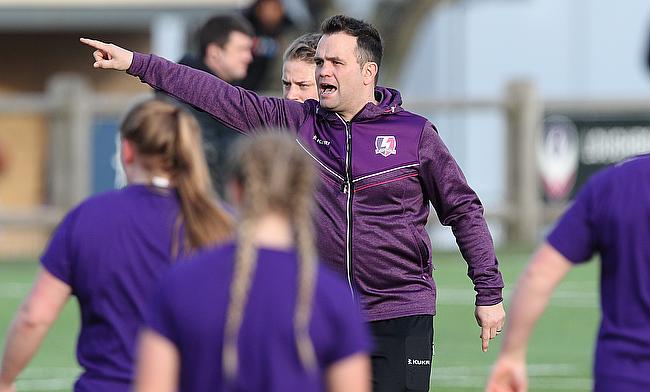 Oz-some experience Down Under sets Scot Eilidh up nicely for Biarritz
Gulliver: 'You can't turn down the opportunity to play in such a prestigious team'
Taylor: ‘It doesn’t matter who it is that we’re playing against, we are going to be united in our goal to beat them’
Sarah Beckett: "You get to live your dream day in, day out. It is sensational"

“I think the landscape has changed dramatically to be honest” began Loughborough Lightning head coach Rhys Edwards. “For the 10 years I’ve been involved, it was an amateur sport where some high profile, high ability, players didn’t really get supported as they should have.

“Now, effectively, having full-time players in the club game is a phenomenal achievement. You look at the likes of Sarah Hunter and Katy Daley-McLean with us, who have been on the top of their game for 10 years plus and have had to earn a living outside of rugby, now have it as their job and sole focus.

“It has paved the way now for younger generations to be full-time players. It’s huge. The landscape has massively changed.”

Having been head coach of Wales’ women’s sides in both the 15-a-side game as well as sevens, Edwards really has seen women’s rugby change before his eyes. Now heading up the Women’s Performance Rugby Union programme at Loughborough, Edwards now works with nearly 200 players at the historic university.

In 2016, the RFU announced a formal partnership with Loughborough, along with 14 other universities to develop rugby players for the future and had a specific focus on the development of female rugby players. Nearly three years after the initial announcement, Edwards believes that Loughborough is well on its way to becoming the best programme in the country.

Great to see 3? Lightning faces in the team! ??

“My vision for the women’s programme here is to be the best performance development centre in the world for women’s rugby,” Edwards said. “Within all this, we’ve got players transitioning into senior rugby, going through those pivotal years of 18 to 23 when they are students. But, that also encompasses a Katy Daley-McLean, a Sarah Hunter and Emily Scarratt as well.

“They’re at the top of their game, but we still have the ability to challenge and improve them, so we are very much a performance development centre. We are challenging players at whatever stage they are at on their journey so that we can get them to that next level.

“To have had people like Carys Williams and Charlotte Pearce get called up to England for the first time and get a full cap is another reward for what the players have put into the programme, but also a sign that the programme has delivered for them.

“You’ve got players who have played Premiership rugby this year that started off in the College, who we’ve said are good enough to play in that league, and they have. At the same time, we’ve put students that have played BUCS rugby on a Wednesday and then progressed them into playing Premiership rugby.

“We’ve had a lot of 17-year-olds play development rugby this year, as they’ve transitioned into adult rugby and are going to be students playing on a Wednesday, or they’ll continue on the performance pathway into Lightning.”

Finishing third in the Tyrrell’s Premier 15’s season that has just finished, Edwards’ side fell short against eventual runners-up Harlequins. However, Edwards believes that his team has excelled, largely due to the fact the side wasn’t an established club prior to the division being formed.

“It was a step up again for us,” he said. “Going back two years, out of the 10 teams, we were the only non-established team effectively. Year one was very much to get the foundations of the programme in and actually establish, and we were unlucky not to make the playoffs in year one.

“Realistically that’s where we were, sort of fifth and the challenge was to get in the playoffs, so to achieve that in two years is a real achievement.

Katy Daley-Mclean is one of the stars of our 12-page behind the scenes feature on Loughborough Lightning. Read the full story only in issue 6 of Rugby, available to order ?????? https://t.co/1FGv7xvQnH pic.twitter.com/rGxWnhO4DC

“Attracting people of Katy Daley-McLean’s quality, and then Emily Scarratt as well when she came out of the sevens, it is a nice reward for what the programme is about. To be able to attract players of that calibre just shows we’re going in the right direction.”

Coming in to start a brand-new programme focusing on the development of women’s rugby, Edwards says that Loughborough was the perfect place for him to be: “I’m lucky that rugby has been established in Loughborough for many years and the men’s programme is pretty good as well.

“They’ve got six teams to manage, so there’s a rugby programme department that very much supports that. We’ve got some good on-field staff as off-field staff. The programme itself is run daily by a huge amount of placement students or volunteers.

“In terms of wider staff, we’ve got a huge amount of volunteers that are as aspirational as the players in terms of rugby opportunities, so we very much tap into our academic students. We’ve had a couple of students that have done two years at Lightning go into professional teams in those roles.”

Having worked closely with Sarah Hunter - who was a player/coach with the university, prior to receiving a full-time contract from the RFU - Edwards said that the England captain is playing the best rugby of her career at the moment. Hoping to get more players on his programme into international set-ups, Edwards believes that Loughborough’s women’s sides can only keep getting better.

“I think ourselves and Hartpury, not that I really want to mention them obviously, but we are different to the traditional clubs. We are based out of a university and very fortunate that we’ve got the ability to access high level support, which is the biggest part of what we can deliver in the women’s programme.

“I think that the fact we have been relatively successful quickly is the ability to harness the historical and high level support that we’ve got. Hence, the ability to recruit the key players that we have.”