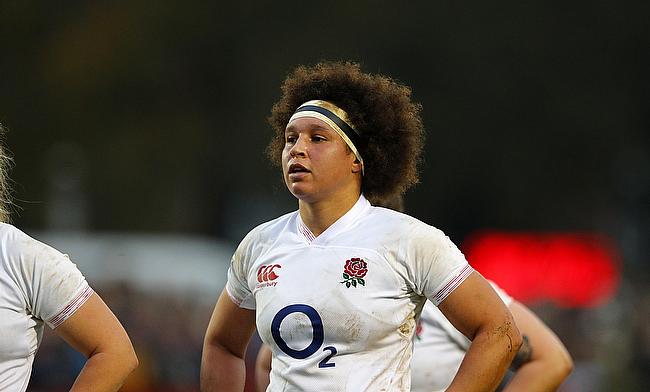 Marlie Packer to miss England Women's Six Nations campaign
TRU Talks: Sarah Beckett - England and Harlequins
The Year of the Rose - Q&A with Sarah Hunter
Natasha Hunt: This is the start of another World Cup journey

The Red Roses' Six Nations campaign begins this weekend in Pau, where England’s Women will take on France.

This game comes just a few months after the Red Roses played the French in Clermont, running out 20-10 winners before beating the same opposition a week later in Exeter.

Experiencing her first game in France last November, Shaunagh Brown started on the bench for both of those fixtures, helping her country finish strongly to overcome a France team that has been England’s main rival in Europe for some time now.

“It was very much a whole town event,” Brown said. “Just walking around the town, people identified you as one of the English rugby players and it is nothing but respect everywhere you go. Getting 10,000-12,000 people to watch a women’s international in France is what it is, it seemed to come natural.

Last week's win over France was a statement made by the Red Roses as the focus begins to shift towards New Zealand 2021.

Have a read of our chat with @NHunt09 ahead of England's clash with Les Bleus in Exeter.

At the end of last September, it was announced that Brown would be receiving a full-time professional contract from the RFU after her strong performances for both club and country. This was a far cry from when the tighthead prop was classified as an amateur athlete when competing for Team GB and England in the hammer throw.

“I had my first game of 15s in December 2015, so yes, just over four years,” Brown said. “I went to the Commonwealth Games, representing England in Glasgow in 2014. The attraction for me (to rugby) is absolutely nothing to do with being full-time, because I came from a sport where there is no money at all.

“Even when we weren’t full-time professionals, we had a part-time salary, when you would get match fees for games and that was it. Even with that, I was like ‘I’m actually getting money for sport which was unreal.

“When I started, it was just the rough and tumble aspect of it. I love the physical contact side of it and in training, I’m the person that loves it when one of the coaches says ‘full contact’ or ‘full smash’, then everyone wants to be on my team, so I take that as a compliment!

“Other than that bit, I love that it is such an inclusive sport. Our scrum-halves are sometimes half of my bodyweight and whole foots shorter than me, but they are still as valuable, if not more valuable than me as one of the bigger girls.”

Receiving her first professional contract in 2017, Brown’s rise to the top of women’s rugby has certainly been a unique one. As well as representing her country on the athletics field, Brown has been a gas engineer, commercial diver, a firefighter and has even competed at a Highland Games.

“I don’t like to say no, I just really like new challenges, like learning new things and I love taking up opportunities,” Brown said. “That is one thing, my mantra in life is to say rather than ‘why do something’, instead say ‘why not?’. If I can’t find a reason why not, I’ll probably go and do it.”

??: “It means a lot to have this level of acknowledgement for doing something that I love and recognition such as this only spurs me on to achieve more."

In Autumn last year, Brown was able to add another qualification to her already overflowing CV. Announced as one of the Evening Standard’s most influential Londoners, the Kensington-raised Brown was the only female player named on the list that included Owen Farrell, Nigel Wray and Eddie Jones.

“It was a bit bizarre,” Brown said. “Like, you don’t even know those lists exist, well you know of them, but for the richest people and people that make lots through their business. I was like; what do you mean? I’m just a kid playing rugby in my head still, I’m just having fun.

“People say I inspire them. I take that as a compliment, but at the same time I am just doing what I want to do and really enjoying life at the moment and everyone is welcome to join me on my journey, but ultimately I don’t do it to influence other people.

“It was pretty special just to get recognised, it’s cool and something completely different. It’s not just rugby, I think on that list there was just a handful of rugby people and the rest were from other sports, so yeah, it was pretty cool to get that recognition.”

England begin their Six Nations campaign at the Stade du Hameau this weekend and Brown says that although France do offer a threat, Simon Middleton’s side is focusing primarily on themselves rather than their opposition.

“I feel that we are in a good place at the moment, not doing too much and not over-analysing things,” Brown said.

“For instance, it is not emphasised that we are looking at what France are doing already because this isn’t a big part from our learning in previous seasons, it is to concentrate more on us, to look at what we do rather than combating what the opposition do.”