The Year of the Rose - Q&A with Sarah Hunter 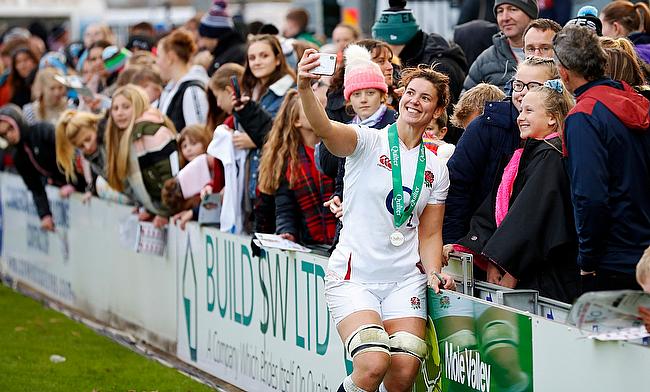 Natasha Hunt: This is the start of another World Cup journey
England Women beat France 10-20 in Clermont
Red Roses ready to end positive year on a high
Charlie Beckett Column: Whack your TV on and tune into the Red Roses

As she is set to earn her 119th cap to go joint second in England’s all-time list of Test players, Red Roses captain Sarah Hunter sat down with Chris Heal to discuss an historic year for the women’s game.

CH: So firstly Sarah, before we look ahead to this weekend, let’s look back at the two games against France. How satisfying was it for the team to pick up two hard-fought wins?

SH: Absolutely. France are one of the best sides in the world. Going away to France is always a difficult proposition and we certainly felt that over the last few years. Before two weeks ago, we hadn’t won there for seven years so we know it is a very challenging place to go.

Our performance wasn’t where we wanted it to be, but we were quite happy with how we went out there especially getting more of a comprehensive result away in France then we did at Sandy Park last weekend.

France have given it away! ??

A loose kick from the visitors in their own 22 is gathered by the Red Roses and Thompson dots down with the winning score! ????

We knew France would be a different challenge coming off the back of that loss in France. Obviously, they were quite disappointed with that probably more so because we’d won the Six Nations so I think they had a few points to prove and certainly came out like that.

Our execution at times wasn’t probably at our best and we probably allowed France to capitalise on our errors. We were up against it right up until the last minute! They kicked to us, but some of the execution to get the ball to Lydia [Thompson] especially under pressure was incredible and I think you could see by the reaction when Lydia scored the try and when the final whistle went just what it meant to win as a team.

To win in moments like that, sometimes performance goes out of the window in top games and getting the win is what matters. It was certainly very satisfying to get two good results over the French.

CH: Marlie Packer told Sky after the game: “We can do anything at any time. We all believe in that.” Is that a mentality which has grown in the squad?

SH: I think it shows you the strength within the squad and the character we are building. That probably is down to some of the training we are doing. Some of the scenarios the coaches put us in! So we’d pretend we’re down by five or we’re on the last play of the game and we need three points to win so it puts under pressure and puts in place so we know how we can find a way to get a result. I think the France game actually showed we’re not willing to give up.

We will keep fighting and I think you saw that in the Super Series as well when we were out in America and the fact that we came from behind twice against Canada and France to win those games. Bar myself, we have got a very young side! It is really good development for them and you learn so much about yourself and the team in games and moments like that. Hopefully when we get to World Cups, we may or may not need to draw upon those but we have got that experience on hand to do that.

CH: So 118 caps to your name Sarah and another record will be rewritten this weekend by yourself. Can you believe the journey you have been on?

SH: Not at all! I didn’t actually realise until Emily our comms manager said about it [cap 119] to be honest. I think as a rugby player, you probably don’t go chasing caps in terms of numbers. I certainly don’t keep a check of how I am doing! I just enjoy every opportunity I get to play for England.

A picture paints a 1000 words! Love this team ???? #thatwinningfeeling

I dreamt of getting a first cap for England and this is beyond my wildest dreams that I am still very fortunate to be part of this team. I’m still absolutely loving it. Obviously now I get paid to do it, it is even better and I just want to keep going as long as I’m contributing to the team.

That’s the big thing for me that I want to be seen as adding value and that I still love the game. That hasn’t changed in the 12 years I’ve played for England and hopefully it will continue for a few more.

CH: You have been at the top of the game for so long Sarah, but do you think that 2019 has been arguably the most important year you have been involved in, in terms of England?

SH: They are obviously significant moments when you have a longer career and I think when maybe everything is finished and you look back, you then take it all in because you still live and breathe it at the minute so I don’t think you actually appreciate some of the landmark milestones.

I think certainly professional contracts in January were so significant for us but not just for us currently, but hopefully for the women’s game for the future. When girls are getting contracted for the first time in 20-30 years time, hopefully they can look back and say 2019 was the year we actually first went professional.

Yes, it is a landmark occasion because of that but there has also been so much that has gone before it and probably gone unnoticed and unseen that has allowed us to get to this point. It’s been a really good year for us and hopefully we can keep building up to 2021.

CH: Mo Hunt told us last week that the focus is starting to turn towards that World Cup in 2021. Has there been a conscious effort to really start thinking about New Zealand in two years time?

SH:  Naturally, we spoke about the fact that the France away game was probably the start of the journey We need to start really heading our preparations towards that about what’s going to make us a better team at the World Cup. Things like, what do we need to lean about ourselves now? What mind shift do we have to put in about ourselves about where we need to be physically, tactically and psychologically?

All these little elements, we’ve now got to start putting in to place because probably 12 to six months out, you want to know exactly what you are, how you’re playing, what you’re doing - everything. It is about fine tuning, but there is excitement. It will be a real challenge to go down to play in New Zealand. Apart from that, France is probably the greatest place you can go to get that experience of a difficult place to play in and everything that comes with it. New Zealand will be no different for us in two years time.

CH: On to this weekend and Italy at home to conclude 2019. How much are you looking forward to playing in Bedford and do you think the success of the Red Roses is attracting more fans?

SH: We’ve found a great benefit of moving the games around. Sandy Park was excellent again going down there. It was nice to hear some English fans! We had a handful over in France but when the French brass band start playing ‘God Save The Queen’ we know we have got them on side! It is brilliant and it is exposing us to a different fan base.

Your #RedRoses squad to take on Italy this Saturday ??

Hopefully we have grown that and I have no doubt that Bedford will be any different. They obviously had the U20s and that was really successful so we’re really excited to go out there and play against an Italy team we know will be difficult. The progress they have made over the last couple of years has been fantastic. No doubt they’ll come out wanting to put a few points right and we’ll want to be finishing off on a high.

CH: And finally Sarah, I am going to put you on the spot here but, if you could sum 2019 up in one word, what would it be?