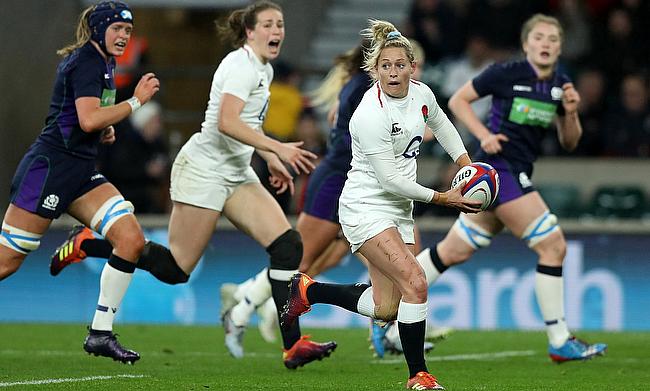 England Women beat France 10-20 in Clermont
Red Roses ready to end positive year on a high
Charlie Beckett Column: Whack your TV on and tune into the Red Roses
From Paris to Barcelona - Graham Smith on life in Spain following Red Roses success

Moving back to the XV-a-side game to be part of a new era for England Women's rugby may have seemed like a simple decision for Natasha Hunt to make.

Having received a professional contract from the Rugby Football Union in 2014, it allowed her to pursue a career in sevens. The Olympics in Rio followed and the 30-year-old also represented her country at the Commonwealth Games in 2018.

So when Hunt admits it was actually an extremely difficult choice for her to return to 15s this year, it comes as no surprise given what she has achieved in the shorter format of the sport. However, after been awarded a full-time contract at the start of 2019, placing herself back amongst the Red Roses was an opportunity she couldn’t turn down.

“I believe it was the right decision for me personally,” Hunt tells TRU. “It is one of the hardest decisions I have had to make. I love both games and I love playing rugby!

“For me coming back across, it was something that I wanted to do. I want to give it my best shot to hopefully put myself in the best place to be selected for the 2021 World Cup squad. It was a tough decision, but I am happy with the decision I have made.”

Delighted to be heading back to my roots and looking forward to getting stuck back into the XVs game. To my 7s colleagues I can’t thank you enough for everything...what a journey! Super excited for my next chapter ?? https://t.co/9yC810jKta

If Hunt is able to secure a place on the plane to New Zealand in less than two years time, it would be her third World Cup.

When we chat over the phone, it comes a few days after Hunt’s 48th cap for England and she is set to reach her half century this Autumn with internationals to come against France and Italy over the next two weekends.

Reaching appearance number 50 would be the latest accolade in a growing list for ‘Mo’ to go alongside her 2014 World Cup winners medal and the bronze she won at the Commonwealth Games.

The Red Roses also ticked off their own achievement last Saturday as Simon Middleton’s side claimed a 20-10 victory in France, their first since 2012, and Hunt was keen to reflect on a satisfying triumph.

“A lot of our girls haven’t played France away and they haven’t experienced that cauldron before” the scrum-half says when asked about the raucous atmosphere they encountered in Clermont.

“For those of us who have, we tried to give the others a heads up of what it was going to be like but we have never really come across crowds like that who are that loud and noisy in a women’s game.

“There is definitely a different vibe when you go and play France away, but one the girls absolutely love. I know it is one of my favourite places to go and play! It is pretty epic so it was huge for us to get the result. To make that statement and to get a relatively comfortable win when we feel we didn’t really get out of third gear was pretty decent for us.”

Hunt admits the more intense and atmospheric the game is, the better when it comes to representing England and this was the case when the Red Roses faced Italy in the Six Nations earlier this year.

A record crowd of 10,545 packed into Sandy Park to see Middleton’s side romp to a 55-0 victory and England are back in Exeter on Saturday for their reverse fixture against Les Bleus.

“For me, I absolutely love the the occasion whenever there is pressure on us or pressure on me as a person,” says Hunt. “I almost feel like it raises my game because it tunes you in a little bit more to what you are trying to do.

“We also love coming to Exeter! I am a South-West girl at heart so I am going to be biased but everyone is just so lovely!

“A few us went into the hotel pool on Wednesday and people in the spa are asking us ‘are you in the England rugby team?!’ We have been offered free cream teas and another guy who was in the sauna was putting all the signage up around Exeter so everyone knows it is going on!

“Selling out stadiums is hugely important for us at this stage. We want to grow the game, we want it to be on telly and we want people to see the brand of rugby we are trying to play. Being down here and knowing we are going to get a decent crowd is just class!

“We feel really valued when we come here and it is so important to us that we can show people the best version of ourselves.”

?? - TEAM NEWS: Here is the @EnglandRugby Women side to face @FranceRugby Women at @SandyParkExeter on Saturday

England showcased their gritty and determined character in the opening quarter against France last weekend. The Reds Roses had to soak up a lot of pressure in their own 22, but two tries before half-time from captain Sarah Hunter proved to be a pivotal moment in the contest.

“She was the one dotting the ball down, but it was her work around the park that probably got her player of the match,” Hunt says. “She was insane!  She just leads from the front every single time she takes to the pitch so it is great to be led by someone like that.

“We had to defend hard in the first 20 and it was massive for us that France were not able to score. I think, defensively, we were properly on it and if we’d gone a couple of scores down, which arguably we should have with the amount of pressure which they had, that would have been harder to come back from.

“We stopped them scoring, we changed the momentum at key points in the game and obviously to get those two scores before half-time I think, mentally, was a huge blow to the French side and it lifted us.

“We know they [France] are going to be a lot better this weekend. We know they have got nothing to lose so we need to make sure we are on our mettle.”

There are certainly no challenges this England side shy away from and Hunt is very much included in that bracket.

Since returning home and joining Gloucester-Hartpury in the Tyrrells Premier 15s, she has become skipper of the Cherry and Whites and she also helps coach the AASE programme -  a key part of the pathway for players who want to take the next step in the game.

“The programme there is great,” Hunt says. “A few of the England girls are part of the coaching team and that is really important for me to be able to try and influence players who have aspirations to go on and represent their respective countries.

“That link across the club has been fantastic. It just drives the youngsters to be better and they see the aspirations of the England girls or the players representing their countries which helps them also learn what it takes to be a professional rugby player.

“To have that fluidity across, it just makes a massive difference and you are seeing it come to fruition with these younger players who are showing no fear!”

The current Red Roses squad have seen the benefit of programmes such as this one. For example, both Zoe Aldcroft and Heather Kerr (DMP Sharks) have experienced playing at university level, whilst contracted to their TP 15s clubs, and the growing number of young players coming through the system has also allowed Middleton to experiment with his side over the last 11 months or so.

However, with the World Cup under two years away, Hunt admits the Red Roses’ preparations for the showpiece event are beginning to get underway and all roads for England, and for the lively scrum-half, point to New Zealand.

“Midds spoke about this in our team meeting before last week’s game,” Hunt admits.

It has been a year to remember for Simon Middleton’s side and he and his players are hoping to end it on a high.

Featuring quotes from Simon and @jessbreach, see how the Red Roses are feeling this autumn.https://t.co/ETHSsHFOUt

“He said that this is almost the start of the World Cup journey. Everything is now gearing towards that performance element rather than exploring.

“We are two years out from a World Cup. We need to be honing down and making sure that what we are doing is spot on regardless of who we come up against because we are checking ourselves on our own high standards. That is the era we are moving towards now and I think we’re doing alright at the minute!

“For me, I want to be one of the best nines in the world. I think that has always been an aspiration of mine and I do feel that I haven’t given it enough of a shot because I have transitioned between 15s and Sevens.

“For me going to this World Cup is my aim. That’s where I want to be. I want to be a standout performer for the Red Roses and I want to help push the standard and the squad on. I am not going to shy away from it! That is what I want to do and fingers crossed I can put myself in the best position possible to do that.”