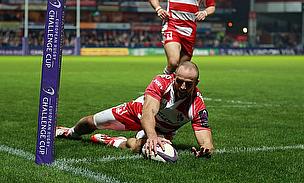 Charlie Sharples marked his 150th competitive appearance for Gloucester with a hat-trick of tries as the Premiership side beat Brive 55-0 in the opening game of the European Rugby Challenge Cup at Kingsholm.

The wing scored the opening try of the game to help Gloucester into a 10-0 half-time lead and he added two more in the second half as they stormed clear of their French opponents with three scores in 10 minutes immediately after the break.

Brive missed two early penalties but other than a few occasional forays, rarely threatened to breach Gloucester's defences and were soundly beaten in the end.

This Pool 5 clash was the first game in the remodelled Challenge Cup tournament and was played out in front of a good crowd at Kingsholm.

Brive, Heineken Cup champions in 1997, have struggled in the Top 14 this season while Gloucester, who won this competition in its previous guise in 2006, are beginning to gel as an outfit after a busy summer's recruitment.

However, it was Brive who had the first opportunity to score but Riaan Swanepoel left his kick short after two minutes of Gloucester pressure were coughed up with an infringement at the breakdown.

Sharples almost opened the scoring in the 10th minute only for Brive full-back Alfie Mafi to make a try-saving interception.

After Swanepoel missed his second kick following a break by prop Damien Jourdain, Gloucester made Brive rue their profligacy as Sharples crossed in the 15th minute.

After a quick lineout gained Gloucester territory, they moved the ball right and Jonny May came off his left wing to feed Sharples, who beat his man to touch down in the right-hand corner.

Greig Laidlaw nailed a tricky conversion from out wide and Gloucester were up and running.

However, they had to be alert to deny Brive on occasion, and the French side had a try disallowed for a knock-on in midfield and the home team needed Ben Morgan to scramble a clearance to touch.

Gloucester then moved two scores clear when Brive indiscipline was punished by a Laidlaw penalty and shortly before the break after a sustained spell of pressure, Billy Twelvetrees dropped the ball with the try-line at his mercy.

While Brive went in to the break unlucky not to be on the scoreboard, Gloucester would have been forgiven for feeling that they should have already put the game to the bed.

Not that it took them long to effectively end the game as a contest once the second half got underway.

Laidlaw landed a penalty three minutes in and after Gloucester moved the ball left and then switched back infield, John Afoa's skilful one-handed offload sent Hook through under the posts for a converted try.

And in the 50th minute, Laidlaw's precision kick over Brive's rapidly disintegrating defence allowed Sharples to run through, pick up and dot down his second try, which Laidlaw converted to put Gloucester 27-0 up.

Both sides were then down to 14 men for 10 minutes as after a series of collapsed scrums, Gloucester's Yann Thomas and Brive's Jourdain were given their marching orders.

Gloucester's bonus point was secured when replacement prop Dawidiuk crashed over in the 62nd minute and Hook, taking over kicking duties after Laidlaw's departure, duly added the extras.

By now, Brive were struggling to gain any sort of possession or territory and when replacement scrum-half Robson placed another precise kick through their defence, Sharples was on hand to race home for his hat-trick, Rob Cook converting as Gloucester rang the changes with the game in the bag.

And there was time for Robson to get on the scoresheet himself after May took a quick penalty on the right wing and put him clear before the game ended with a penalty try for the hosts after another scrum infringement by Brive.

Cook added the extras for both scores to cap a perfect start for Gloucester, who have now scored 251 Challenge Cup tries in all.

The other two teams in the pool, Oyannax and Zebre, meet on Saturday.