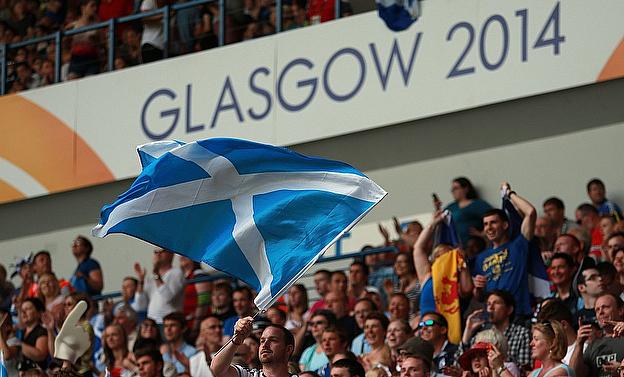 "The crowd loves us because we are the last kings of Scotland," grandly proclaimed Ugandan head coach Tolbert Onyango as the Ibrox stands tumbled with chants of support for his intrepid Rugby Cranes.

It was that kind of day: Papua New Guinean prop forwards posed for photos while vanquished Sri Lankans satisfied snakes of autograph hunters, squeezing out every last second on the stage they shared with the mighty, steam-rollering All Blacks.

Welcome to the crazy conveyor belt that is rugby sevens, a bone-punishing, lung-bursting parade of far-flung prowess which was vocally embraced by the Glasgow public and is coming to an Olympic Games near you soon.

The surge in popularity of the sevens format might have caused cold sweats among some traditionalists but there appears a profound kind of democracy in the way in which it has become accessible to nations with little history to speak of in the 15-a-side code.

If the Commonwealth Games can rightly claim to have blazed the international trail since installing sevens in its programme in Kuala Lumpur in 1998, its origins stretch back to the Borders town of Melrose where the game was first played in 1883.

Barring the two Wars, the tournament has been held every year since: sevens has not so much come home to Glasgow for these Games, as never really left.

Perhaps that party explains why the Ibrox stands have thronged for two days of competition, filling the famous arena with a volume which did not distinguish between four-time defending champions and starry-eyed also-rans.

When Sean Ward streaked clear to touch down for Barbados in the death throes of a 31-7 defeat to the Cook Islands. the cheer might have been mistaken for the kind that would greet a surge from the great Sandy Jardine.

Ward scored his nation's only two tries in a five-match campaign which yielded 12 points in their favour and 248 against. He hopes the disrepancy will not be quite so pronounced if his team manage to qualify for its sport's Olympic bow.

"It's what you live for, running down the wing and scoring a try in front of that kind of crowd," said Ward. "We have made a big statement simply by being here, and we can use this as a stepping stone to another, bigger goal."

Onyango's Uganda are already deeper into the process. Rugby in Uganda dates back to British colonialism and its former dictator Idi Amin - the self-styled 'Last King of Scotland' - was said to have been a powerful forward, although the sport was largely suppressed under his tyrannical rule.

Despite inevitable funding concerns, they have emerged alongside Kenya as one of the leaders in the sport in Africa, and it is something Onyango expects to continue.

"After soccer, rugby is the most followed sport in Uganda and it is continuing to grow in the whole of east Africa," said Onyango.

"Tournaments like this give us the opportunity to learn from the top countries in the world and we hope to implement these more technical elements in our programme."

The Ugandans finally exited after a 32-0 defeat to Canada and a lap of honour - completed with a succession of extravagant swallow-dives - as long-winded as it was well deserved.

As dusk fell on Ibrox, it was left to the traditional titans to take over the show. But from Bridgetown to Kampala and beyond, the Olympic dream means the Sevens light will continue to shine for some years to come.