Mitchell aims to knock All Blacks off their perch 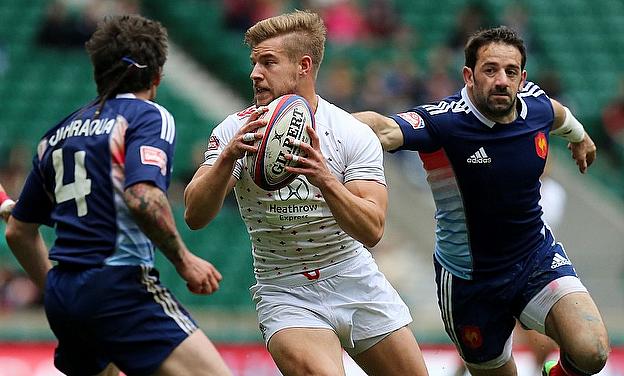 England rugby sevens captain Tom Mitchell believes the odds are in his side's favour as they bid to dethrone the All Blacks and claim their first Commonwealth gold.

New Zealand have dominated the sport since its introduction in 1998 with England's best finish the silver medal they won eight years ago in Melbourne.

However, a new training regime and something near to home advantage in Glasgow means Mitchell's side have arguably their best chance of toppling their antipodean rivals.

"There are certain advantages to us," Mitchell told Press Association Sport.

"We haven't had to travel far which is a benefit and where we are after the training we've done, we're in a really strong position so we're hoping to do very well and it's certainly realistic to be up there.

"Speaking to some of the guys who were in Delhi four years ago, a fourth place finish is pretty tough to swallow and everyone is pretty determined to go well this year."

Coach Simon Amor has mixed up training to replicate the late finishes England will face in the competition, but his side are well aware of the teams they are going to face.

England finished fourth in the World Series this year with five of the top six teams from that tournament set to compete at Ibrox.

New Zealand, South Africa, Australia and Canada will all be bidding for gold but Mitchell says England are only focusing on themselves.

"The top five or six in the World Series bar Fiji are all here so they will be coming and expecting to do well," the 24-year-old said.

"You can do your homework on these teams based on what they have done previously but the important thing is that we focus on ourselves.

"We've worked incredibly hard over the last couple of months to get things right, and working hard in the gym as well to get in the best possible shape for it.

For Charlie Hayter, the Commonwealth Games is something of a new start altogether.

The 25-year-old took the decision to switch to rugby sevens at the end of the Aviva Premiership season but is confident the change will pay off.

Hayter was on Wasps' books from 2012 until this summer but a lack of match action led him down a new path towards Glasgow.

"It's a new opportunity with the big draw of the Commonwealth Games which we have been training for, for the past eight weeks," Hayter said.

"I had a conversation with Wasps and I wasn't going to get the game time I wanted next year so I had a chat with Simon (Amor) and had the opportunity to come over here and get a new challenge and I'm really excited about it."

James Rodwell, who was part of the team who finished an agonising fourth place in Delhi, is ready to take the step onto the podium this time around.

Rodwell, 29, who was selected for a 50th consecutive World Series appearance in Hong Kong earlier this year - a record in English rugby sevens - is confident England have the ability to win a medal.

"There are a few of us involved who were in Delhi four years ago when we finished fourth which is probably the worst place to finish in a medal event," Rodwell said.

"For us it is about building on each performance and trying to get the best result possible.

"We know if we play to our potential we have a really good chance."