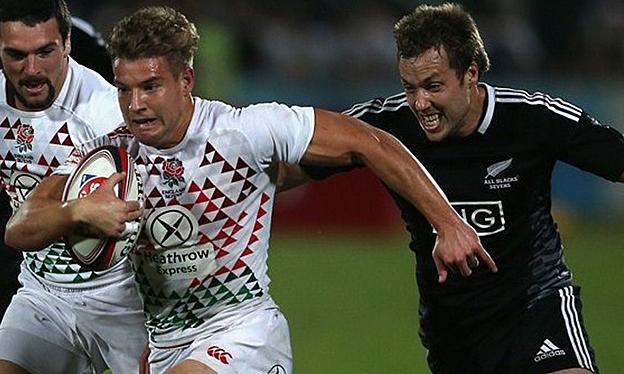 Following the recent announcement of the England Sevens squad ahead of the 2014 Commonwealth Games in Glasgow, TRU’s Mike Stanton highlights some members of the squad to keep your eye on throughout the tournament.

England Sevens Coach Simon Amor has largely stayed faithful to his centrally-contracted side that came fourth in the World Sevens Series for the squad he will take to Glasgow later this month.

The likes of John Brake, Daniel Norton, Tom Powell and James Rodwell provide some much needed experience – all of them having competed in the 2010 Delhi Commonwealth Games.

Tom Mitchell has been chosen to skipper the side having taken over the captaincy in January. The skipper is certainly one of England’s key players, having been nominated for the IRB Sevens Player of the Year award as well as being the highest point scorer in last season’s Sevens World Series.

Mitchell has already proven to be a cool head under pressure, having slotted a match winning drop goal against New Zealand in the final play of the match at Twickenham in May.

In the 2012-13 season he broke the English record number of tries in a season, crossing the whitewash a remarkable 52 times. This, combined with the 37 and 32 tries in the two previous years respectively, means that Norton now sits second in the list of all time England try scorers and fifth in the world.

Along with these experienced members of the squad, Amor has also selected eight players to make their England debuts. These include Charlie Hayter and Mark Bright who put in impressive performances in the first two legs of the FIRA-AER European Rugby Sevens Grand Prix Series.

Hayter has now signed from Wasps to England Sevens, making him one of Amor’s centrally contracted group following his debt in Lyon. Bright, 35, is the London Scottish number eight and captain and has consistently performed for the club since signing in 2011. His powerful running and eye for the try line make him a very exciting prospect looking to lay down a marker in Glasgow.

Coach Amor has expressed his delight at the team, strengthened by the return of John Brake and Michael Ellery after their respective injuries, as England will be looking to win their first Commonwealth Gold in the sport since it was introduced to the Games in 1998.

Drawn against Australia, Namibia and Sri Lanka in the Pool stages, England will hope to build on their third place finish in the Twickenham leg of the World Series and improve on their last visit to Scotland, where they won the plate.

England’s first fixture of the Commonwealth Games is in the morning session versus Sri Lanka on 26 July at the Ibrox Stadium.