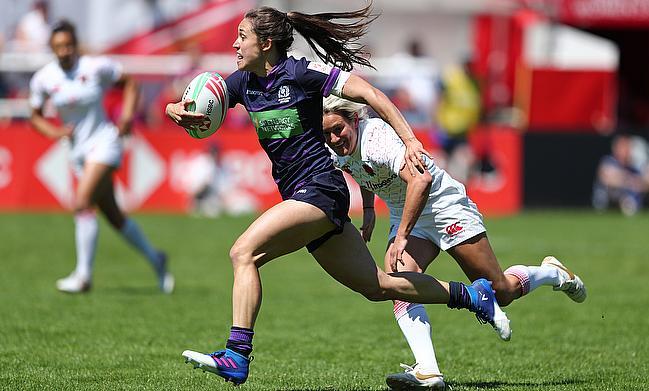 Having six Scottish women selected in the Great Britain Sevens wider group which is training for the Olympics has given the national XV’s squad a massive boost after a disruptive few weeks.

And there is belief that those involved can all really push hard to make the plane to Japan for the showpiece event later in the year.

That is certainly the view of Scotland XV-a-side assistant coach Bryan Easson who, as a backs coach by trade, was delighted to see Megan Gaffney, Rhona Lloyd, Helen Nelson, Chloe Rollie, Hannah Smith and Lisa Thomson all named in the 24-player pool by GB Sevens head coach Scott Forrest along with 15 English and three Welsh athletes last week.

No Scottish woman made it to Rio with GB in 2016, but Easson feels all of them can put their hands up for selection over the coming weeks and months.

“Of course, it is a big boost,” he told TRU. To have Scott [Forrest, the Scotland Sevens head coach] there with GB and representation from Scottish Rugby in terms of players is a huge coup for us and for the athletes themselves.

Brilliant to see @Scotlandteam players @MeganGaffney7, @RhonaLloyd96, @hnelly12, @itschloerollie, Hannah Smith and @lisathomson10 in @scottforrest84's extended GB sevens squad ahead of the Olympics - good luck to all, 24 will become 13 before Tokyo

“I watched the session last Friday [when GB Sevens trained on the outskirts of Edinburgh] and I was impressed with how our girls really stepped up with the girls from England and Wales.

“I didn’t feel they were out of their depth, they were on par, if not better, than the other players in the squad. They’re there on merit.”

The six aforementioned players are currently part of Scotland’s Six Nations campaign which has gone through a tough spell of late for varying reasons.

After a tight opening loss to Ireland when they could, and maybe should, have won, it did give Philip Doyle’s side plenty to build on in round one, but since then they saw their round two match, a loss to England, moved to be played behind closed doors on a Monday due to snow and their round three match in Italy postponed.

The team were already in their base in northern Italy preparing for the fixture in Legnano on February 23 when it was announced that it would not be played due to an increased number of Corona-virus (Covid-19) cases in the Milan area.

As a result, they will have to return to Italy at some point in the future to complete that game while, by the time they face France in Glasgow on Saturday night, they will not have played since February 10.

“We’ve not looked at it as disruption, it’s pulled us all closer together”

With Doyle, Easson and co looking to build up some momentum ahead of the World Cup qualifiers later in the year, the recent ‘stop start’ nature of things has not been ideal.

However, the assistant coach does not feel the lack of games has had an adverse effect on things before the match up with a France team who have scored 95 points in their last two outings.

"In terms of the Six Nations, as soon as the game [in Italy] was cancelled you would never have known there was anissue with the way the girls and the management behaved,” Easson explained.

“We just got on the flight as soon as we could get one and came straight back. There’s been no issues ever since.

“We’ve not looked at it as disruption, it’s pulled us all closer together. We’ve had time where we’ve been able to sit down as a group and adversity always helps in these situations. It’s something that’s pulled us all together, we’re back in camp again now and we’re ready to go.

“We have a full squad to choose from, everybody is fit and healthy. The games we’ve played have been tough fixtures, but the extra bit of time [off] has allowed us to come into camp and train with 25 fit and healthy players. We’re really looking forward to the game.”

“We believe we can have a go at them”

Easson explained: “France have played well so far in the Six Nations and they’re a good side. They played well against Wales [when they won 50-0 in round three in Cardiff], but not in the first 20 minutes so we’ve picked out a few things where we believe we can have a go at them.

Scotland Women get ready to face France this Saturday in the @Womens6Nations in Glasgow.

Tickets available in advance of the game at https://t.co/aXOuzGxjSv. #AsOne pic.twitter.com/9zPnWDO8Iu

“The opportunity to play teams like France and England allows us to pull ourselves close to them. They’re working hard but we’re working just as hard to catch up.”

The Scotland 23 to play France is set to be named on Thursday in the early afternoon.

Scotland take on France in the Women’s Six Nations at Scotstoun in Glasgow on Saturday evening at 7.45pm