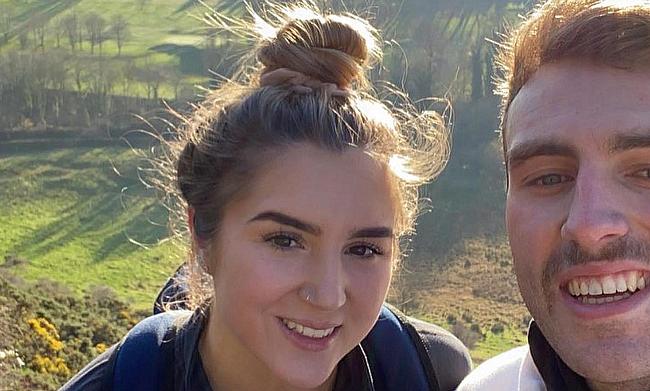 Looseheadz x TRU Podcast: Callum Braley
“It’s up to Matt to show what he can do”: Fagerson’s battle with Alldritt will be key on Sunday
'Club mates can be so important in helping with mental health issues, let’s keep talking'
‘This is your Everest boys’: Duo taking on mental health charity challenge

Ruairi Campbell is used to tackling players on the rugby pitch, but last weekend he and his partner Laura tackled a challenge of a different kind to raise vital funds - and awareness - for charity.

Like most rugby players in the UK below the professional level, 22-year-old Campbell, who mainly plays back-row but ended up covering centre for Accies in the Premiership in 2019/20, has been craving a return to competitive action.

However, with with the club campaign for 2020/21 already cancelled north of the border, Campbell has recently turned his attention to another energetic goal.

Back in May, you may remember that TRU ran a story regarding Glasgow Warriors’ Johnny Matthews and fellow rugby player Tom Wilson raising funds by climbing the equivalent height of Mount Everest in under 24 hours by taking on around 2600 flights of stairs at Boroughmuir’s Meggetland clubhouse in Edinburgh.

As well as money, the pair raised awareness for a new charity - set-up by Tom and another rugby player Jack Steele - called Support & Offload which aims to combat mental health issues through sport and exercise.

Well done to @wilsontom10 and @JJEMatthews on completing their mental health charity challenge, over £2,500 raised so far!

“I heard about Support & Offload through the rugby grapevine in Scotland and I know Tom pretty well so I was keen to do something to help them if I could,” Campbell told TRU.

“A couple of my close friends have had to deal with mental health issues so it was quite close to home and when I saw what Johnny and Tom had done, I wanted to set myself quite a challenge if I could.

“Myself and my girlfriend Laura did some research and we came across the stat which said that in 2018 there were over 6,500 suicides registered in the UK and of that number, around 77% of the suicides were male - making suicide the single biggest killer in men under the age of 45.

“We were quite taken aback by that stat, so myself and Laura decided that we were going to cover a distance of 77kms to represent the percentage of suicides committed by men in the UK.

“We aimed to do this by running 50km and walking 27km in and around Edinburgh city centre on November 28.

“Both of us knew this would be a big challenge, but we wanted it to be like that and we knew that we could count on each other for moral support to get us through it.”

“We felt exhausted, but we pushed on through”

So, how did the duo get on?

“We managed to complete the full 77kms,” Campbell, who is originally from Melrose and is currently teaching PE at Berwickshire High School, said.

“The challenge started at just 7.20am and we stopped occasionally for small breaks throughout the day and thankfully the weather was kind to us.

“We managed to stick to our task of 12km runs and then 7km walks for the first half, but from there on, we both felt exhausted and both had hurt our knees, but we pushed on through.

“As a result, we just finished the rest by doing random bursts of running when we felt okay and then did a bit more walking. We stuck to the route that we had originally set for ourselves and finished at exactly 77kms.

“It was tough and we really had to work hard, but it was worth it to raise funds for the charity and, once we have recovered, we will look back on it as a great achievement.”

Campbell’s rugby journey to date has seen him play for Melrose and Accies at XVs while he studied at Edinburgh University and is a very handy sevens player.

He has helped Accies win some silverware on the Kings of the Sevens circuit previously and has toured with select teams such as the PROJECX Waterboys, the Rex Club Red Kites and Samurai.

By Monday of this week, Ruairi and Laura had raised £1,585 as a result of their successful challenge so far with many people from the Scottish rugby community contributing to the total.

Tom Wilson explains: “We are not professionals, we are not therapists, but we are committed to providing a platform for those who are struggling to feel comfortable asking for help, by connecting individuals to mental health professionals and connecting on a personal level.

“We are a local and accessible charitable organisation in Scotland who want to educate, communicate with and connect all those in need to support networks through the provision of sport and exercise.

The team at S&O have been working closely with @shepwedd and we are delighted to release our IMD 2020 video.

At S&O we are using sport and exercise to help tackle mental health problems and make it easier for men to talk about the way they feel. pic.twitter.com/Qdg5Cxf5Db

“One of the main stigmas surrounding mental health is the misconception that opening up about your own personal struggles will be perceived as weakness.

“It can be daunting for someone who is suffering to have the courage to talk about their own mental wellbeing.

“The relationships you can create with one another in a sporting setting can help you navigate through the tough times in your life and provide you with a support network that you can call upon in times of need.

“At Support & Offload, we want to incorporate this sense of togetherness within our network.”

You can still donate to Ruairi and Laura’s fundraising by visiting justgiving.com/crowdfunding/lauraandruairi and you can find Support & Offload on Facebook

Charlie Beckett Column: Be kind, look out for each other, and let’s get through this together