Sarah McKenna on England’s World Cup bid, combining playing with coaching and an important autumn ahead 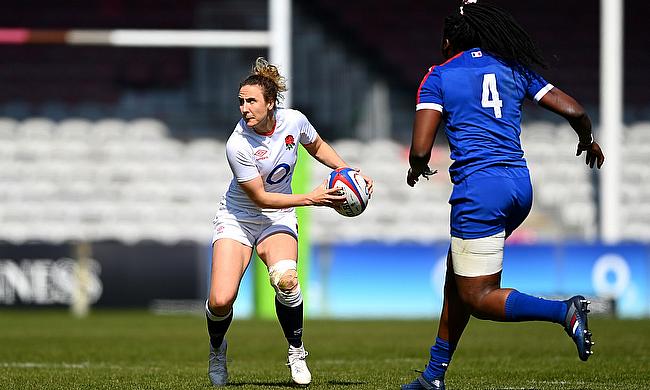 Inside the University of Exeter pathway and why it is benefitting the Red Roses
England's bid for 2025 World Cup receives government backing
England to bid for 2025 Rugby World Cup
Maud Muir Exclusive: The teenage prop making an impression for Wasps and England

“We have got all our fingers and toes crossed that it can take place,” says England’s Sarah McKenna, with optimism in her voice as we discuss what the future might look like for the women’s game.

On the horizon, there is excitement for the Red Roses. Over the next month, Simon Middleton’s side will test themselves in successive matches against world champions New Zealand before facing Canada, ranked third in the world, and the USA to conclude their autumn.

The four fixtures ahead of England will light the fuse on their World Cup preparations after the competition, which was scheduled for this year, had to be pushed back until 2022 due to the Covid-19 pandemic.

Twelve months from now, the quarter-finals will be taking place - which the Red Roses are likely to be involved in given they are currently the No.1 side on the planet - but it is the subsequent World Cup which McKenna is referring to.

Of course, the short-term focus for the Saracens star is to board the plane to New Zealand but having been part of the international set-up for just over a decade, the thought of England hosting the biggest competition in the sport in 2025 is hard to gloss over.

RFU announces bid to host the @rugbyworldcup in 2025 ??

Earlier this month, the Rugby Football Union unveiled their ambitious plans to stage the World Cup in four years’ time, and their bid received a shot in the arm this week when Chancellor Rishi Sunak confirmed the government would be supporting the proposal.

When the tournament was last in England in 2010, McKenna recalls being a fan in the crowd when the Black Ferns narrowly beat the Red Roses in the final at the Twickenham Stoop.

Just over a year later, the versatile back was making her international debut against the USA and she believes if England’s bid is successful, hosting a World Cup will have a significant impact on the growth of the women’s game.

“I am not sure if many players in the current squad can remember when the World Cup was last in England!” McKenna laughs. “It was just so inspirational. It played a massive role in where I am today.

“Getting to put quality rugby on in front of people and getting it on TV to broadcast across the country can get that buzz about women’s rugby.

“I think it is the same as when there is any home tournament. The whole country just gets on board with it. English fans around home tournaments, you can’t beat it. Of course, there is a lot of pressure which comes with that as well, but I think it would be something really special for players to be a part of.”

According to reports, forecasts predict staging the tournament would inject over £100 million into the UK economy, but from a rugby point of view, the clear aim is to create a legacy by increasing participation numbers and funding the grassroots level of the sport.

“Women’s rugby in terms of the community game is the foundation of everything that goes on above it,” adds McKenna. “We are so closely connected to it as players. Growing up, it was part and parcel of everything we do now.

“There are a lot of girls in this England squad who started playing at minis age and girls picked up rugby typically at university as well so they are so closely associated with their first minis team or their first girls’ team. I think players, especially in this squad, love giving back. I don’t think you will find too many players who don’t go and visit their local club, so to keep growing the community game would be massive.”

Going back to where it all began is something which McKenna holds close to her heart. The former Sevens star has been coaching at her first club - Old Albanian - for the last few years, so she has been at the coalface when it comes to the rise of the women’s game.

The trajectory of the sport has undoubtedly been on an upward curve since McKenna was sat in the stands at The Stoop 11 years ago, and this can be attributed to England’s own World Cup success in 2014 as well as the growth of the Red Roses and the Allianz Premier 15s.

Given McKenna has seen this first hand from a playing and coaching perspective, she seems best placed to discuss how the game has evolved: “The way in particular the Championship, which is the level Old Albanian are playing at, has grown is massive,” she says.

“It is a 10-team league now so the girls are getting 18 games of Championship rugby a year, plus the cup competition so that is loads of rugby. Alongside that, we have just started a second team. The number of clubs who do have teams is growing year on year.

“You turn up to a women’s fixture on a Sunday, the junior girls are coming off the field to go and watch the senior women and it is like being at the club on a Saturday but instead of men playing, there are women playing. It is great to see the progress we have made.”

What emotional rollercoaster does a coach go on when their side is about to win the title and they are 400 miles away? I asked Sarah McKenna about how she coped when @oasaints won the championship.https://t.co/2aj9E9IDqZ

Whilst McKenna’s immense passion for developing players at her old club is immeasurable, combining her role as a coach with her Saracens commitments has helped the 32-year-old become a better player.

“I think it has allowed me to maybe reflect on why something happens and it might make me think it is relevant to my game as well if that makes sense?!" says McKenna. “The biggest benefit I get from it is I have to break things down and obviously when you deliver that as a coach, you have got to break it down into bitesize pieces or understandable pieces.

“That has really made me question the ‘why’s’ so why I do things or why the team I play for do things and therefore, I bring that into the team I am coaching. It has really made me question whether what I thought was right to begin with is the best way to be doing things. You have got to have that true understanding and then you are able to critique it. I think it has had unbelievable effects on my own game both as a player and as a coach.”

Having that mindset means McKenna continues to put in solid displays for Saracens. She has started all five of their victories this term as Alex Austerbury’s side look to put the disappointment of losing last season’s Allianz Premier 15s final to Harlequins behind them.

Helping Saracens maintain their strong start to the campaign are Veo, a global leader in AI-powered sports recording and analysis.

It is clear McKenna - who signed a new contract with Sarries in the summer - is always looking to link her performances with her coaching, so it isn’t a shock to hear the 32-year-old heap praise on Veo, especially when she is operating at full-back.

“Veo has been unbelievable because of the quality that it offers, but also it really gives you that wider perspective on things,” McKenna adds. “Of course, anyone in those back three positions or if it is me at full-back, you need to be looking at what is happening off the ball so you can identify space elsewhere.

“Rugby is no longer the north-south game it used to be. It is a 360-degree game that we are now looking at so the interactive view which Veo gives you allows you to look at the space like you have never been able to look at the space before. With the 50:22 law which has come in, Veo helps even more to see where that space is.

“Veo allows you to highlight where the space might be elsewhere and how you can manipulate teams around that whether you are at full-back or another position on the field.”

McKenna won’t be donning the No.15 jersey for England this weekend when they take on New Zealand in front of a packed crowd at Sandy Park, but she knows how vital this autumn is for the Red Roses.

New Zealand are likely to be England’s primary challengers at next year’s World Cup, but the Black Ferns arrive in Exeter having not played a Test match for over 24 months due to the pandemic.

In the same period of time, England have competed in 14 games but they will be without the influential Emily Scarratt for all four matches after the 2019 World Player of the Year suffered a broken leg.

Stepping into her shoes on Sunday will be McKenna’s Saracens teammate, Holly Aitchinson, for her first cap at outside centre.

Wasps’ Maud Muir is also set to make her full international debut from the bench and McKenna, who has 36 caps to her name, is excited by the blend of youth and experience in the current squad as England prepare to write the next chapter in their journey.

“The squad is really competitive,” McKenna explains. “The players that are in here are performing in the Allianz Premier 15s week in, week out. That is just credit to the quality of rugby at the clubs and what they are producing so I don’t think England have ever been blessed with so much talent.

“To have that youth coming in and those vibrant players who don’t play with any fear I think is so powerful sometimes and you have to ride that excitement with them. It is infectious to be around some of those players.

“It is a really exciting moment to be in the squad, and you have got to make sure you get that blend right because we have got some old heads who are key decision-makers around the park, but then some players who can step their way out of a phone box! We are not guilty of having those cardboard cut-out players that have to fit a mould.

“For us now, it is about the performance itself. We have got to have a true assessment of where we are at as we approach the World Cup next year, so we have got to go out there and put everything on the field we have been working on and not think 'we should have done this or we could have done that.'

“We want to show the world what we can do in these next four games so I suppose if we get that right, we hope the results will look after themselves, but we have got to find a true performance of where we are.”

So, whilst we began the interview talking about what could be for England in 2025, McKenna and the Red Roses are fully aware their bid to claim the biggest prize in the sport will continue to take shape in the immediate future.