Sale Sharks’ Northern Soul: “A meaning behind the badge” 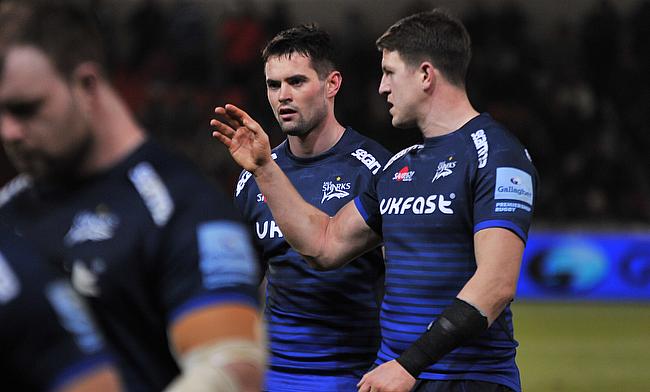 “We forever want to keep together a strong northern soul.”

Alex Sanderson is discussing Sale Sharks’ homegrown talent. In recent weeks, a plethora of youngsters have been handed further opportunities by the club’s Director of Rugby, but as those who follow Sale will know, this philosophy isn’t revolutionary.

Sanderson’s predecessor, Steve Diamond, continually banged the drum about promoting youth during his tenure at the club, but when a new coach comes in, often they will look to rip things up and start again.

For Sale, this was never going to be the case.

You can point to Sanderson’s selections and rotation against Harlequins - and more so Bath - as to why a host of the club’s academy graduates have recently racked up some Gallagher Premiership minutes, but Sale’s boss was quick to stress his commitment to their emerging stars.

Sanders reacts to a tough first gig at the AJ Bell...

Following his first defeat in charge of the Sharks against the aforementioned Bath, there was scrutiny placed at Sanderson’s door due to the number of changes he made to the starting XV, but what was striking once the dust had settled was his undeniable faith in Sale’s ‘next generation.’

“I want to give these lads an opportunity,” Sanderson told TRU. “Me coming in here, I am going to stand up and give them opportunities and I will never close the door on them.”

But for the club’s Director of Rugby, it is about finding a balance between game time and their continued development as players.

“Playing for Sale is an added motivation for them,” continued Sanderson. “They have then got to be good enough and they have got to earn the right to take the opportunity. No-one is gifted it. They do that through getting those opportunities through rotation and in training as well.

“Selection is the biggest motivator. They all want to play, but it is important not to use it as a weapon to beat them with or a motivating stick. By rotating them in, you are taking that pressure of playing for your club away a little bit and hopefully increasing squad harmony as well as longevity.

Sanderson’s start to life back in Manchester has fluctuated in recent weeks. Impressive wins away at Leicester Tigers and league leaders Bristol Bears have been followed by defeats to Bath and Quins, but Sale have had some personal highlights to be proud of.

Scrum-half Will Cliff, who started out at local club Sandbach, reached 200 appearances for the Sharks against Harlequins last weekend whilst the James brothers have both recently ticked off milestones.

At the end of January, Sam celebrated his 150th outing for Sale with a try at Mattioli Woods Welford Road whilst Luke kept things consistent by marking his 50th appearance with a match-winning score against Bristol.

At 26 and 21 years-old respectively, the James duo have already shown their worth to the club but at the same time, they still have plenty to offer Sale as they settle into the Sanderson era.

In a way, the siblings, along with Cliff, are the nucleus for what the Sharks are striving for. Along with the Curry twins, Josh Beaumont and several more, they are prime examples of the ‘northern soul’ which Sanderson alludes to.

Others on the periphery of the squad, and in the academy, will now be aiming to tread a similar path.

“I would love to keep these young guys for life,” Sanderson added. “We have got a massive contingent of not just English rugby players, but northern English rugby players. I am very proud of that. I didn’t know how many there were before I sat down with them for their one-on-ones. A lot of them went to my old school!

“It is a big thing talking about Sale being the focal point for the North-West. I am not that way inclined to look at myself as part of a club that is that influential, but it is.

“I think that starts with the example these boys like Sam and Luke set on the field and off it. It is massive for them to be role models and they know that.

“We are also already in talks with Sale FC, who you know we have got a good relationship with and who I played for. We are talking about that relationship with our academy players, but also an affiliation with the junior and minis step up because that is brilliant.

“That is something we need, not just a professional club. We want there to be a deeper meaning behind the badge and what it means for the north so the more we can involve these grassroots clubs and schools, the Sharks moving forward will be better.”

The journey which Sanderson touches on is something which both James brothers have experienced. For Sam, he admits his time at Wilmslow High School helped him thrive whilst Luke is arguably playing some of his best rugby for the Sharks.

“I do think back to Wilmslow quite a lot,” Sam said. “I think it was a massive step in my development. The programme which [Roger] Hancock and [Matt] Bebbington (two of Wilmslow’s former coaches) created had such a professional feel about it and I know the school still have those foundations in place today.

“It really set me up well for the rest of my rugby career. Look, we both are so proud to represent the club and where we came from. We love to give back as much as we can to the local area and the places and people like Wilmslow and Manchester RUFC who helped us along the way. We want to help at clubs, high schools, primary schools just to really inspire the younger generation to get into rugby and enjoy it.

“I am now getting aged a little bit and my brother is sort of an everyday reminder of that! I do really try and focus on the young lads coming through; giving them advice and helping them out as much as possible. We have been lucky at Sale that we have had so many young lads from clubs and schools around the North-West coming through which is only going to make for a better squad.”

As for James’ old stomping ground, they are very much part of a cluster of regional schools who are providing a stepping stone for aspiring players. Sam and Luke are just two of the high-profile names to have walked the corridors of Wilmslow High, and the hope is more will follow.

“We are still really proud of what Sam and Luke have achieved,” Wilmslow High’s Head of Rugby Nathan Rushton said.

“Since Luke was in the academy set-up, we have always had two or three lads in there which I think for us is something we want to maintain because it shows the success we can have as a state school when it comes to rugby development, but also the links we have with Sale’s academy.

Rushton, who also works for the Sharks academy, added: “Wilmslow has had a steady stream of talented players every two or three years who have signed professionally. Elliot Millar-Mills who has just signed for Wasps, people don’t know he is an ex-Wilmslow student so guys like him, Tom Hudson, Sam, Luke, and even former pupils like Tom Cruse, are examples of guys who have gone on to sign a professional contract having played at our school.

“It is a credit to the teachers at Wilmslow who have created that person who can play at that top level and hopefully the next generation we have can follow in Sam and Luke’s footsteps.”

The faith shown in homegrown talent at Sale does share some parallels with their opposition on Friday night.

Exeter Chiefs’ commitment to local players has been a major part of their recent success and in Rob Baxter, they have a leader who has expertly knitted together their Devonshire core with a sprinkling of international quality.

It is clear Sale and Sanderson are continuing to do something similar with the likes of Faf De Klerk and his fellow South African compatriots, but the Sharks’ strong, northern soul is still evident and the signs suggest it is here to stay.