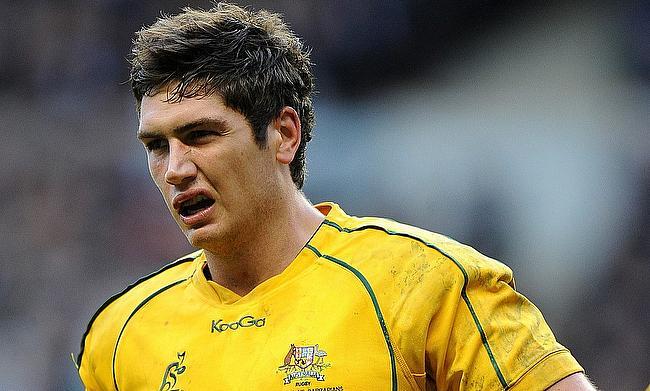 Wasps make two changes for semi-final against Lyon
Spanish international lock Josh Peters to join Newcastle Falcons
Anton Bresler Exclusive: 'I thought my agent was pulling my leg when he said I could join Racing'
Mark McCall - Saracens' boss ahead of semi-final meeting with Toulon

Ahead of the Premiership Rugby Cup final tomorrow night at the Brentford Community Stadium, London Irish’s Rob Simmons says that “nothing has been won yet” heading into the encounter with Worcester Warriors.

It’s early on Monday afternoon when the 106-cap Australia international sits in front of the media. He and his teammates have been preparing for the Premiership Rugby Cup final since their Challenge Cup campaign came to a close against Toulon two weekends ago with a 19-18 loss in the south of France.

Nearing the end of his second full season with Declan Kidney’s side, Simmons is well aware of the potential that the next 80 minutes of his career has in store at a club that hasn’t lifted a trophy since the 2001/02 Powergen Cup.

“This club hasn’t enjoyed silverware for 20 years,” he said. "That is a long time, and these competitions have been around for a long time. I don’t think any trophy should be taken light-hearted, and nothing has been won yet, so we’ll find out tomorrow night how hard it actually is.”

One of the most experienced players in the Exiles squad, Simmons has 10 years of international rugby under his bench and 13 years of professional rugby. Even then, his own personal trophy haul is relatively limited.

Across his years as a Wallaby, he picked up a Tri Nations crown in 2011 and a Rugby Championship title in 2015 and in 2011 also won Super Rugby with the Queensland Reds in a second-row partnership with former Harlequins lock forward, James Horwill.

This isn’t to say he didn’t go close either, the 33-year-old having started for Australia in the 2015 Rugby World Cup final, he and his teammates losing the game at Twickenham, 34-17.

When it comes to tomorrow night, whether London Irish lift a trophy on Tuesday night or not is unimportant, the club having been a yoyo club in recent years before finally finding some stability under Declan Kidney and at a new Central London home.

“Personally, it would be awesome,” Simmons said. “That’s what us as players play the game for. Hearing over the last couple of weeks, what it would mean for this club, it just gives you extra motivation.

“This is a club that has been up and down over the years and has really shown it wants to be a topflight team, and I think this will be a steppingstone to going that way and considered in those realms.”

Starting at full-back for London Irish will be Henry Arundell. The 19-year-old Academy product has burst onto the scene in the latter half of this season, scoring a smattering of simply phenomenal tries, the most recent of which against Toulon.

Such have been his performances, the teenager is the next cab off the rank in many people’s shouts for an England callup, there being plenty of added intrigue as a result of the back’s qualifying for multiple home nations.

Dancing across the line ??@henry_arundell in our semi-final ??

Throughout his career, Simmons has been surrounded by some of rugby’s most talented players having been able to call the likes of Quade Cooper and Matt Giteau teammates, the lock rating Arundell as one of the most talented he has seen.

“I was saying this to someone the other day; you talk to other guys on other teams, and you ask questions like; what’s this guys like? What’s that guy like?” Simmons said.

“Each person will say ‘he’s awesome’ or they do something awesome in training that you just never see in a game, and he is 19.

“It is unbelieveable, and I think we are really only scratching the surface of a guy like that. He has got so much to give.”

Lining up alongside Chunya Munga at lock, Simmons will be playing in a forward pack that also contains Facundo Gigena, Marcel van der Merwe, Mike Willemse, Albert Tuisue, Juan Martin Gonzalez and Matt Rogerson, who captains the side.

In the backs, Ben White forms a half-back partnership with Paddy Jackson, who will have Benhard van Rensburg and Will Joseph in the midfield, while Ollie Hassell-Collins, Lucio Cinti and Henry Arundell made up the back three.

A noticeable observation is that even without several top line players, Kidney is able to select a squad more than capable of competing for a trophy. That is all a part of the journey the club is on, with Simmons pleased with the progress that the club is making since he first received the offer to swap Sydney for London.

“I think it is tracking quite well,” Simmons said. “I had some quite honest conversations around that, no one was trying to deceive me and say, ‘we are the world’s best team’, which I really liked.

“It felt like something I could fit into, I could provide and move this team forward to where it wanted to go, and that was something that I was quite keen to join.

“I think we are tracking the right way; we are definitely not the finished product and we have still got a lot of growing to do.

“I think if we look at the top four teams in the Prem right now, the consistency they do everything at, they are not the best teams in the world. They could be, we don’t know, they don’t win every single moment, that is the beauty of rugby, that they just do things more consistent than us.”

A further oddity of this week is that the Exiles’ 2021/22 campaign will conclude on Saturday afternoon with a trip to Bath. Now out of contention for a playoff spot, a win at the Recreation Ground will go a long way to the potential of a top eight finish and a Champions Cup berth for next season.

With a five-day turnaround until their final fame of the season, Simmons believes that the work done by he and his teammates this year has helped provide some clarity on exactly where the club is in relation to their closest competitors.

“For London Irish especially, given that last round is a bye for us, so that is our last game,” Simmons said. “That is the beauty of the competition over here, every game really does count towards something, and you have to treat each moment as it comes, because you don’t know where it is going to end up at the end of the season.

“Even as our last game will finish, given there is another game after that for most clubs, we don’t know. So, you just have to live in that moment and give your best in that moment, at that time.”