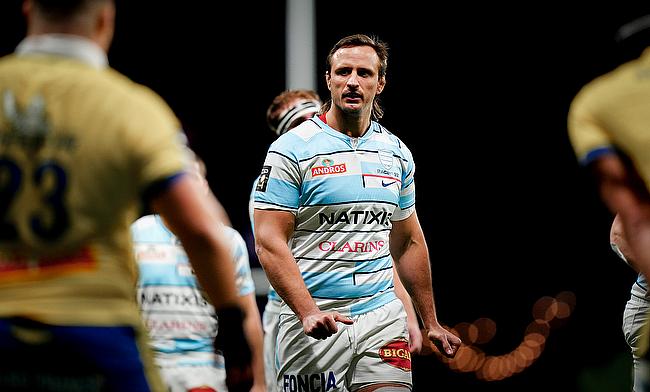 Anton Bresler has recently extended his stay with Racing 92
©Racing92

Rory Arnold: “To be the best, you have got to beat the best”
Rugby Rumours: Watson a Tiger, Cipriani in MLR, Tahs for Nadolo and Eddie's Racing
Anton Bresler to make switch from Worcester Warriors to Racing 92
Allan Dell and Anton Bresler extends stay at Edinburgh

Anton Bresler recounts his days as a schoolboy rugby player in South Africa in the early 2000s.

“Going to Durban High, it is well-known for being a prestigious sporting and academic school,” he says.

“I don't know if you have ever seen how well supported school rugby is in South Africa, but it just spurs you on. If I’m honest, I never wanted to become a professional rugby player but with that atmosphere and that environment, it just drives you on.”

It’s at that point where Bresler feels his career in the sport truly began. He attended Durban High on a scholarship and the exposure of representing one of the leading sporting schools in the KwaZula-Natal area provided him with a path to the Sharks before he made his move into Europe.

As we chat over the phone, we touch on his spells with Edinburgh and Worcester, but also the “huge” and unexpected opportunity to join Racing 92 in December despite playing virtually no rugby at all at the beginning of this season. Bresler also gives us a snapshot into his life in Paris and he explains why playing alongside the likes of Finn Russell is so reassuring.

Thanks a million for all the lovely messages and positive responses I’ve received over the last couple of days.

I had an absolute blast @WorcsWarriors , I’m walking away with incredible memories from the past 4 years, all thanks to great team mates, staff and supporters ??

Bresler takes us through his journey to date and it is clear he has absorbed every experience he has encountered. Having reached a Super Rugby final in 2012 and a European Challenge Cup final three years later, he is now targeting the next step with Racing.

The 34-year-old may have been born in Namibia, but South Africa is where he still calls home. His family were ‘sport-mad’ and it wasn’t just rugby. His cousin, Tinus du Plessis, did go on to represent Wasps as well as the Welwitschias at three World Cups, but whether it was tennis, cricket or even motorsport, Bresler emersed himself in it all.

“Sport, in general, has always been a massive part of my life,” he says. “You make your best mates through sport as well and through rugby and then you are completely surrounded by it. When I used to go round to my friends' houses, what did we do? You go and play rugby or cricket in the street or in the park.

“Growing up, every second day, it was either school or club rugby. I think I probably only had a Friday off. You can just imagine it. If it is something every day, it just develops in you.”

His transition from his primary school which was situated in a suburb south of Durban to his high school - where English was the first language - was a big shift in Bresler’s childhood but one which gave him the taste to pursue rugby as a career: “South African's absolutely love rugby so that connection and wanting to play is spurred on by everyone,” he says.

“I think if I hadn't of gone to a school like Durban, I probably wouldn't have been 'seen' if I was at a smaller school. That would have made the rugby dream or the chances of making it slim. I don't think it would have happened. Being at a big sporting school, you are always more likely to be seen and that is how the Sharks opportunity happened.”

From that moment, you get the sense Bresler wasn’t disguising his drive to broaden his horizons. After four years in Super Rugby, he wanted to use the sport to not only forge a career but also for his own social mobility.

“I’ve always wanted to use rugby as a way of seeing the world. I think I started looking to go abroad when I was 24 just because I was really interested in what was out there, in travelling and seeing places. That dream came up when I was about 25 or 26 to go to Edinburgh.

“That was the perfect opportunity to experience a different culture. I moved over there with my wife [Kelly] so we got to see quite a bit of Scotland which we really enjoyed. Edinburgh was class, of course, and then that journey came to an end and I thought let's try something new and try the Premiership.”

After ticking off the then Guinness Pro12 [now the United Rugby Championship], the next stop for Bresler was the West Midlands and Worcester Warriors. An impressive second season with the club in 2018/19 was followed by a contract extension at Sixways but a frustrating period led to the 34-year-old thinking about his possible next steps.

“Worcester was class for a few years, but things started to begin to get a bit rocky in the last year. I was always quite intrigued with France so I thought 'let me look around and see if there are any opportunities.’”

His own opportunities in a Worcester jersey were becoming limited due to the emergence of the likes of Andrew Kitchener and Justin Clegg whilst a foot injury he sustained at the end of last season ruled him out of the opening stages of this current campaign.

It might be too strong to suggest Bresler was looking to resuscitate his career, but even he couldn’t have dreamt of the “surreal” chance which came his way in December of last year.

“I was coming back from a foot injury and my agent just said to me there was an opportunity to sign as a [medical] joker at Racing,” Bresler adds. “At first, I obviously said to him 'you're pulling my leg, you're taking the piss.'

“I think it was the next day he told me I had a Zoom call with them. I had not played for six months so my first game was that weekend coming so how it happened that a bloke who had been out for six months managed to get a gig at Racing, I don't know how they did it!

“I was sat there and there was Laurent Travers, the DoR, Dimitri Szarzewski [Defence Coach] and Mike Prendergast [Attack Coach] who are all men of stature on this call. I was quite taken aback. I was quite lucky because I had not played rugby at all and me wanting to leave and experience France and then it being Racing 92, that is quite huge.”

Bresler made his debut off the bench against Castres on December 4th and, as expected, he has adapted to life well in the French capital even though he was initially daunted by the language barrier.

A one-year extension to his short-term deal means the second-row will call Paris his home for a little longer and he hopes the frequent visits from wife Kelly and son Malachi - who have stayed in England for now - will become more permanent.

“I can't really speak French but you can start understanding what people are saying and most of the players all speak good English too. You pick up a word or two when they speak so you can sort of put the puzzle together!

“Paris is Paris! I love it but unfortunately, my family obviously couldn't come over yet. Every day, I try and do a walk around, grab a coffee and do some people watching! Enjoying it for what it is worth! Not everyone can say they had the opportunity to come to Paris before and now I get the opportunity to live here for a bit.

“I live close to where the actual training base is so just outside the centre of the city. During the day, I am at the club so I think living in the middle of Paris would not be a smart idea! You don't want to get caught up in the traffic and I just think the novelty would probably wear off if you lived right in the centre!”

On the pitch, the ‘novelty’ of slotting into a star-studded team and rubbing shoulders with the likes of Finn Russell isn’t fading away for Bresler. The Scotland No.10 was at his brilliant best last Sunday as Racing battled past Sale Sharks to set up this weekend’s Champions Cup semi-final showdown with La Rochelle.

Bresler continues: “I think it is that unpredictability that Finn has which makes him a quality player. I am sure he doesn't even know what he is going to do sometimes! He is a cool head and he's a box of tricks. He is a 10 who has got loads of time on the ball just because he is so laid back which I think is a good quality to have.”

Russell will be key on Sunday in Lens as the Parisians look to book their place in a fourth Champions Cup final in seven seasons.

The big prize has continued to evade Racing after near misses against Leinster and Exeter Chiefs in recent times and Bresler, who is relishing the experience of another big occasion, understands the importance which is being placed on this upcoming clash with their Top 14 rivals.

“We have always come really close but we have just not gone all the way so I think everyone is really hungry, everyone is extremely driven in this environment,” Bresler says. “Coming to an environment like this, there is never a sense of doubt which I probably think has made this club as good as it has been for the last few years.

“That no doubt aspect and the confidence, for me personally, I absolutely love being around that because any player can sort of doubt themselves a bit but being surrounded by some of these great players, it really helps you.”

With Racing sitting fourth in the Top 14, there is still the possibility of a top two finish and a semi-final berth on the domestic front but those within the walls of the Paris La Défense Arena are craving success on the continent.

For Bresler, he has always tried to squeeze everything out of any opportunity that has come his way and after turning his own ambitions of experiencing Europe into a reality, he is now keen to help Racing make their collective dream come true.

“Anything can happen on Sunday and it is a new opportunity, a new game. What has gone before doesn't matter now. It is about making the most of the new opportunities and I think with the environment and the confidence this team can create, I think we will all make the most of it this weekend.”