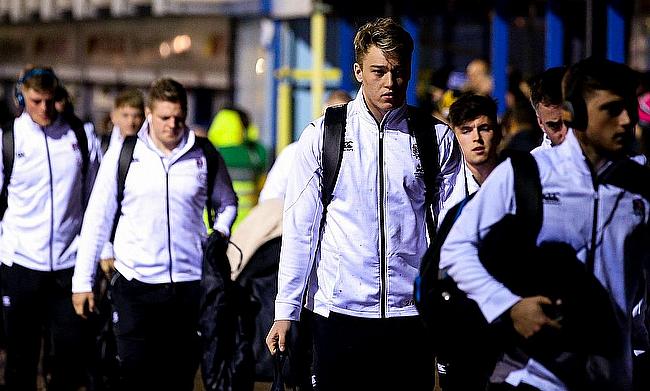 If there was ever proof needed that England’s international pathway worked, there is some. In the past 10 years, the U20s have won three World Rugby U20 Championships and finished as runners-up on four more occasions.

It is a programme with success at its heart, but it is not only progression to the senior set-up that constitutes success.

Another key indicator of a player using the experiences given to them in the England U20 Elite Player Squad (EPS), is whether they can become first-team regulars with their clubs.

Of course, the class of 2021 is far different from the group that preceded it. Alan Dickens and Andy Titterrell have had mini regional training camps, four regional games and various calls with players in order to finalise the final 32-man squad for this year.

From looking at the alphabetised list, the first name stands out most. Alfie Barbeary has certainly made an impact at Wasps. During the Premiership restart, he has already made a name for himself due to his versatility and ability to find the try line.

Primarily playing out of position, Barbeary is used to operating at hooker but has primarily found himself playing in the back row at club level, and he was called up to the senior England squad for training towards the end of the Autumn Nations Cup.

Unfortunately, his rampages have been halted by an ankle injury that has required surgery and it will keep the 20-year-old out until after the Six Nations, meaning the forward is unlikely to make his debut this spring.

Staying in the forwards, both Richard Capstick and Jack Clement have established themselves at their club sides. Clements’ efforts saw the back row selected into England’s wider training squad in preparation for the conclusion of the Six Nations.

Still only 19, the Gloucester player has got plenty of developing to do and he has seen increased game time under George Skivington at Kingsholm. Clement should continue on the same path in the 2020/21 season and he will also be part of the 2021 EPS.

Exeter lock and back-row Richard Capstick has now graduated the England U20s programme and is already making his presence known under Rob Baxter. Having only started from the bench on two occasions for England U20s, the Exeter University student has become increasingly involved with the Chiefs' first XV since August last year.

Having made just a solitary appearance pre-lockdown, Capstick would play five times for Exeter in the Premiership, with three of them being starts, in each of which he would play the full game, as the club went on to be crowned domestic champions.

Already this season, the 20-year-old has six appearances under his belt, five coming from the bench with his latest 80-minute appearance occurring last weekend against Wasps at the Ricoh Arena.

One of Capstick’s club teammates, who was also part of the 2020 EPS, is number eight Rusiate Tuima. He has also seen increased involvement with Exeter, but the powerful back-row has not become an out and out starter at Sandy Park due to the force of nature that is Sam Simmonds.

?? | Congratulations to Ben Donnell, Luke Green and @Atkins_Ben! The three Exiles have been named in the @EnglandRugby U20 squad for the U20 Six Nations Championship opener against France! Good luck lads ??

In the backs, there are several more successes too. Gabriel Hamer-Webb had already made an impression at senior level with a try on his Champions Cup debut for Bath in 2019 and made seven more appearances at club level from that point onwards.

Full-back Josh Hodge has also made an impact. After not getting too many opportunities at Newcastle, the former Sedbergh schoolboy moved to Exeter last summer, making his debut some weeks later and he now serves as one of Rob Baxter’s second options in the 15 jersey when Stuart Hogg is unavailable.

Freddie Steward, too, has made the step up at club level. The 20-year-old is now Leicester’s starting full-back and he makes a lasting impression every time he steps onto the rugby field in club colours.

Fellow back three player Noah Heward has also impressed in the Premiership. Having made his first Worcester start in August, he has looked self-assured for Alan Solomons’ side. He already has four tries in all competitions for Warriors and he will be a big part of the “new Worcester” that Solomons is building at Sixways, the full-back born and raised in the West Midlands.

Perhaps the biggest success story from the 2020 squad is Manu Vunipola. Establishing himself as Saracens’ second choice at fly-half, he made 17 appearances in the 2019/20 Premiership season at Copthall, 14 of which were starts. In truth, it doesn’t feel unfeasible that the 20-year-old could be in contention for a place in Eddie Jones’ squad in the near future.

Like Vunipola, Ollie Sleightholme had already made something of an impact at club level for Northampton, making his debut for Chris Boyd in 2018.  Already with 10 tries to his name for the club, Sleightholme is set to become a regular on the wing at Franklin’s Gardens.

“I would say that the only person who is going to make you better and allow you to perform at your best is yourself."

England U20s resume their Six Nations campaign this weekend and one of their stars has been Gabriel Hamer-Webb...?????????????? #SixNations https://t.co/CwFRcsfveJ pic.twitter.com/9YU1u7pWMw

Sam Maunder made his Exeter debut in 2018 and has gone on to make 11 more appearances in the first team. Like Capstick, he is an Exeter University student and watches on most weeks as his brother Jack fills the nine shirt, much like their father, Andy, before them.

Elsewhere, Leicester’s Jack van Poortvliet and George Martin, Gloucester’s Josh Gray, Harlequins’ Hugh Tizard, and Sale's Tom Roebuck, Connor Doherty and Tom Curtis have each had involvements with their clubs, but not consistently.

Six players already capped at England U20 level have been included in the 2021 EPS. Each of Harvey Beaton, Luke Green, Sam Riley, Clement, Roebuck and van Poortvliet return for Dickens, with some other uncapped players also featuring again.

More names could be recognisable thanks to increased exposure as squads were pushed to their limits when closing out the 2019/20 Premiership season. Charlie Atkinson is perhaps the highlight on this list, the 19-year-old Wasps fly-half having been promoted to the senior squad back in May and he is now regularly involved under Lee Blackett.

Bath’s Ethan Staddon is also a point of interest, the back row having made his club debut in December aged 18.

England U20s will be returning to action in February, nearly a year since they last took to the field in the Six Nations.