Mat Protheroe: “It has been a quick transition, but I know I have a long way to go.” 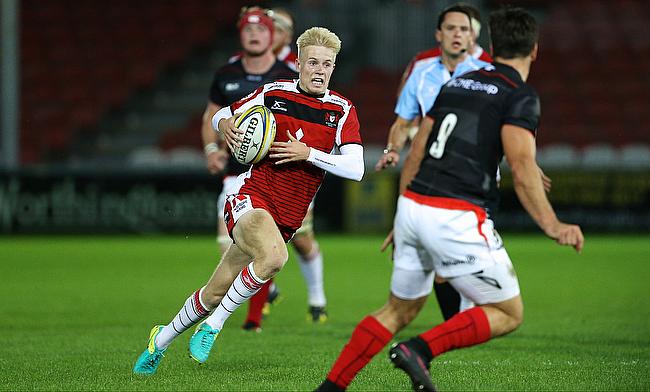 Mat Protheroe has already had to deal with big decisions in his short career, but is now enjoying life at Gloucester
©Martin Bennett/Gloucester Rugby

Future Wasps aiming to shine at all levels
Callum Sirker: "I didn't know if I would get another chance"
Niall Saunders: Following in my Dad's footsteps
Sam Skinner: Taking Opportunities
Ollie Thorley: “I feel lucky to have played for my country”

From playing for his local club in Wales to choosing which country to represent, life has rapidly changed for the young fly-half, who is continuing his impressive progression at Kingsholm.

Adapting to life as a full-time professional rugby player has been an eye-opener for Mat Protheroe. He knows that climbing the ladder to the top level will be a tough process, but he fully understands the situation he is currently in. Keep learning he continues to tell himself, even if he is itching to make his mark at Gloucester.

Despite only being 20 years-old, Protheroe is already quite well known in the sport. Whether it is because of his rapid rise through Hartpury College’s ranks in National One, his well-documented decision to play for England rather than Wales or his impressive displays wearing the Red Rose at under-18 and under-20 level, Protheroe is doing all he can to take everything in his stride.

“The transition has been really quick from College to professional rugby for me, but I can’t look too far ahead,” he says. "It [joining Gloucester] was a bit daunting at first when I came in at the age of 18, but the club and all the boys were very welcoming and it was great to be part of a professional environment.” Two years later and Protheroe is enjoying life at Kingsholm and has been rightly tipped as future star for the Cherry and Whites.

At the beginning of the U20 Six Nations campaign just under a year ago, the Swansea-born Protheroe made a decision to represent England and made his first appearance against Italy. The game took place at the Stadio Mario e Romolo Pacifici – about 35km east of the centre of Treviso – in front of crowd of 1,800. Protheroe started at fly-half and his inclusion continued his excellent progression through the England ranks after impressing for the England U18s in 2015. Another milestone ticked off in his rapid rise.

I ask Protheroe about this astounding progress he has made from growing up in the town of Loughor to where he is now and he admits it has been a bit of a whirlwind. He has had little time to settle and find a comfort zone, but now he is at Kingsholm, he seems able to focus on where his career goes next whilst remaining realistic about the position he finds himself in.

Protheroe takes me back a mere 12 years when he first remembers properly playing the sport. “I started playing the game when I was eight for a local team in Swansea - I would say the name of the club, but I don’t think you would understand me!”

He was spot on. After some research, Protheroe began his career at Waunarlwydd RFC, a small club in Swansea where he stayed for eight years before the chance arose for him to take his first step onto the rugby ladder. “I was offered a rugby scholarship at Hartpury College when I was 16 and I just grabbed that with both hands. Playing there was great for me as I learnt so much about performing at a good standard and I featured a lot in my second year which helped me get the chance at Gloucester. When I think about where I am now, it has all happened so fast.”

Protheroe signed his first professional contract with Gloucester in 2015 after impressing in the third-tier of English rugby for Hartpury College as well as getting a call to join up with the England U17 squad. For a rookie fly-half and a versatile back, there aren't many better places to be learning more about the game than at Kingsholm with the likes of Grieg Laidlaw and James Hook around. “All the experienced players are great with me,” adds Protheroe.

“They do advise me and I have been learning small tricks and tips off them. Even after training whether it’s still on the field or just sitting down with them, it’s great to see some of the players scrutinise their own performance just to see how professional they are and how much detail they go into which is what you need to do to be successful at this level.”

It’s clear just speaking to Protheroe that it means the world to him to try and take that next step in his career. The constant progression which he has felt throughout his short time as a rugby player has continued this season with two Anglo Welsh Cup appearances against Saracens and Northampton, but he remains grounded.

Protheroe has not been included in England’s U20 squad for the Six Nations next month, but the debate about where his international career goes next is firmly at the back of his mind, despite it grabbing some headlines last year with the young fly-half representing England despite having no English ancestors.

“My time with England has been fantastic and I am grateful too. It has opened another avenue for me and to come together with some of the best young players in the country is great. To meet new people and to be taught new ways to play the game is really good and England just love a player to go out an express themselves.

“I have haven’t given any thought to England or anything to do with international rugby recently.I am just focusing my rugby on Gloucester and just seeing if I can break into the Aviva Premiership Saturday team.

“It has been quite a slow progress for me so far at Gloucester, but you have to respect that. There is a lot of talent in front of me, but I am still young and I am learning so much here so I am really happy to take the chunk of game time that comes my way and just keep impressing when I can.”