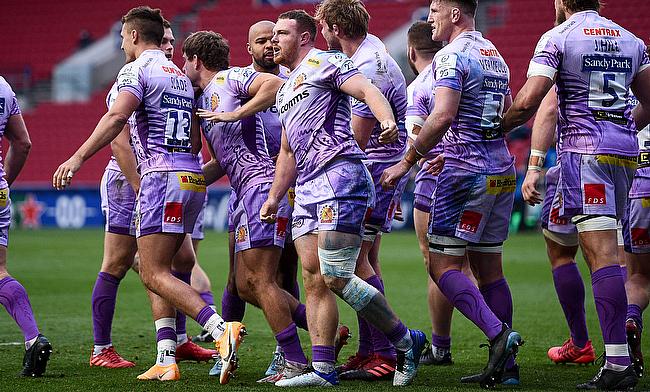 Joe Harvey was at the Brentford Community Stadium as London Irish welcomed fans to their new home for just the second time.

Sam Simmonds broke the record for the most tries scored by any player in a single Premiership season as the British and Irish Lion crossed the whitewash on three occasions to surpass the 17-try record shared between Dominic Chapman and Christian Wade.

The No.8’s efforts were incredibly influential to Exeter’s 31-12 win at the Brentford Community Stadium, putting the team four points ahead of Sale Sharks in the Gallagher Premiership table.

There was a noticeable difference with the 3988 fans distanced around the ground. Scanning the faces just before kick-off, it was clear being at the Exiles' new home was far more than just watching a game of rugby, one man in particular trembling as the men they were there to cheer on made their way onto the pitch.

For much of the afternoon in London, it had rained ferociously, but by the time Joe Simmonds kicked the game off, the sun was setting, and it shortly became clear that both teams had come to entertain their fans.

As they so often do, Exeter had the best of the early exchanges and Sam Simmonds scored his first try of the evening after a series of strong carries off the back of a driving maul. From the restart, momentum quickly swung and Irish got their hands on the ball.

Wave after wave of powerful surges from the men in green took them all the way to the try line. With the naked eye, when Ben Donnell reached over, it seemed to everyone that the 20-year-old had scored. Supporters were on their feet, the noise almost deafening, but there was no arm in the air from Christophe Ridley, the only man who mattered.

It’s Premiership history as @samsimmonds_ goes over for his second

Exeter buffered back their hosts but gave away a penalty in a more than kickable position for Paddy Jackson. The tee came on to the field and as the Irishman was lining up, a hand went to the ear of Ridley. Try for Ben Donnell.

When chatting to TRU late last week, Donnell spoke about how he had not played in front of fans for a long time and, despite a wait, received all the praise in Brentford for providing a score to draw his side level on a slippery Tuesday evening.

Joe Simmonds then got in on the action, the England hopeful throwing a dummy to befuddle Lovejoy Chawatama in the midfield before racing in relatively unopposed. Sam Simmonds’ history-maker quickly followed much to the delight of the Chiefs media team - the score again the result of a carry that had both Nick Phipps and Ben Loader clinging on for dear life.

Irish ended the half with what was undoubtedly the try of the game. Ollie Hassell-Collins clung on to a chip through from his fly-half Jackson and offloaded to the oncoming Loader whilst being dragged down.

In the second period, Exeter pressed their foot onto the throats of London Irish, not allowing them an inch of space and it meant they were kept scoreless for the remainder of the fixture.

It was certainly an interesting half for Tom O’Flaherty, the wing dotting down after some indecision from Loader before being sin-binned after taking Tom Parton in the air. That bit of foul play earned him an earful from some less than pleased Exiles.

There was a bit of swag in that celebration from Simmonds! Unbelievable player.

The hat-trick score for Man of the Match Sam Simmonds neatly bookended a game in which the champions did have to overcome early adversity and a London Irish team impassioned by the presence of a home crowd.

So, I’ve been wracking my brains now for an hour to think about what to write here. Yes, Sam Simmonds was world-class, but that’s the obvious thing to write about. Beating a try-scoring record that outdates my very existence on this planet is quite the feat, but that is the headline.

In fact, it is my headline.

What I will write about instead is seeing fans back in a stadium for the first time since March 2020. Obviously, there have been several periods where spectators have been allowed into stadia, but being on my West Midlands island, I have been unable to experience the novelty of several thousand people socially distanced at a venue. Until today that is.

To be brief about it, it was brilliant. For months now, the biggest stages have felt cavernous, the sounds from players, coaches and the commentators echoing off the concrete providing the only source of atmosphere for the best part of a year.

As I mentioned in the match report, I took a look around me at the faces of those who had made the trip to their club’s new home and saw a man trembling. That one moment reminded me of what it means to people to watch their team play.

From that point onwards, I looked at this entire game differently. Of course, London Irish would have loved to have won in front of nearly 4,000 fans at their brand new home, but that sense of normality is just as important, that feeling that in the months to come, we will see grounds get fuller and fuller until we are at maximum capacity again.

I suppose I should probably mention something to do with the actual rugby?

To do a brief ‘Lions watch’, Sam Simmonds did everything asked and required of him in the game. Whether that was carrying hard at the defensive line or being explosive in space, the No.8 is in top form and has become, in my mind, a real contender for a starting spot for Warren Gatland this summer.

Sticking with the Simmonds family, Joe Simmonds has again had a worldie. Showing his attacking prowess, some good defence and clear leadership, should he, Marcus Smith and George Ford be named by Eddie Jones in his summer plans, there’d be plenty of headaches for England's selectors.