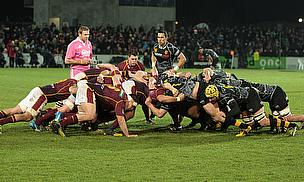 Rabodirect Rebels Defeat Waratahs in Opening Trial
Super Rugby - What the Highlanders and Hurricanes have to Work with
New Zealand Super Rugby 2014 Squads Named - Who Missed the Cut?
The 2014 Super Rugby Transfer Market

A much milder climate than last week’s sweltering conditions greeted the RaboDirect Rebels in Geelong at Simonds Stadium, as they looked to build on last weeks performance in Albury.

The Rebels made it two from two this preseason, getting over the top of the Hurricanes in the second half to win 24-22 thanks to the decisive penalty kick from Jason Woodward.

The Rebels were quick to get the parochial crowd involved from the outset, taking the lead inside the first four minutes as Woodward converted an early kick when the Hurricanes were penalised for holding in the ruck.

The Hurricanes were quick to reply with a score of their own, fullback Nehe Milner-Skudder capping off a brilliant combination of cross field passing to score a try in the corner, set up by a barn storming run from flanker Brad Shields. The remainder of the first quarter was of a combination of fire and ice passing with not everything sticking to hands, as the both sides wrestled with early errors.

Melbourne found themselves camped in their own final third for the remainder of the first quarter, holding off a forever advancing Hurricanes side. The visitors attempted a driving push for the line late in the quarter only to be held firm in their tracks by the Rebels forward pack.

Persistence paid off in the end for the Hurricanes, finally breaking past the Rebels defensive line, with a centre of the park combination passing for flanker Ardie Savea to break a tackle and find the line to the right of the posts.

However, right from the kick-off the Rebels were able to take advantage of field placement, firstly Luke Jones providing some drive and carry to be held up short of the line, and then Hugh Pyle completing the move by touching down in the corner for the Rebels first try of the game. Jason Woodward converted the sideline kick to bring the Rebels within 2 points of the Hurricanes.

Again infringements around the ruck gave the Hurricanes an opportunity to put more points on the board, flyhalf Marty Banks making amends after missing his earlier conversion from just outside the 22.

The Rebels were again able to retain possession from the restart kick, and moved the ball through hands probing for their try line. An excellent line break from lock Hugh Pyle combined with a clever off load to fellow lock Luke Jones who was held up just before the line. Yet quick ball movement from the ruck by scrumhalf Luke Burgess opened up an opportunity for number eight Colby Fainga’a to slide in for the try to level the scores at 15 apiece.

The deadlock was broken right on the half time siren with a Jason Woodward penalty kick from the right wing, near on 40 metres out, giving the Rebels the lead as the sides were leaving the field.

The RaboDirect Rebels took a slender lead into the second half 18-15, in a half that saw the Hurricanes having the lion’s share of possession. The usual trial match policy of wholesale changes were made, with the Rebels Captain Scott Higginbotham coming off the bench to see his first bit of action in Geelong.

The Hurricanes threatened early in the second half, with centre Tim Bateman charging down the wing, only to have his effort closed down swiftly. However Quick passing from the tap saw a cut out pass finding Matt Proctor to dive over and score the third try for the visitors, which was converted.

The Rebels found themselves with plenty of possession in the third quarter and only handling errors from the set pieces held them back from returning with a try of their own, with Woodward adding another penalty after plenty of good work from Lachlan Mitchell to reduce the deficit to one point.

All Black Tamati Ellison entered the game to loud cheers from the Rebels as he made his maiden appearance in the 5 Stars, as a raft of further changes continued. Bryce Hegarty added another penalty after dominant work from the Rebels’ scrum, and at three quarter time the Rebels led 24-22.

Ben Meehan came on to replace Luke Burgess and instantly provided plenty of bite, bossing the ball and looking to keep the flow in the Rebels favour. In the closing minutes the Hurricanes looked to find the decisive score, a drop goal attempt drifting wide. A frantic closing minutes from both sides was put to a stop by a huge Lachlan Mitchell tackle that got the crowd out of their seats, the Rebels able to shunt the scrum 10 metres backward and retain the ball and the slender lead to hold on for victory, 24-22.

The Rebels conclude their pre-season next Friday at Ballymore in Brisbane, with a trial match against the Reds, before the first match at AAMI Park against the Cheetahs on Friday February 28th.