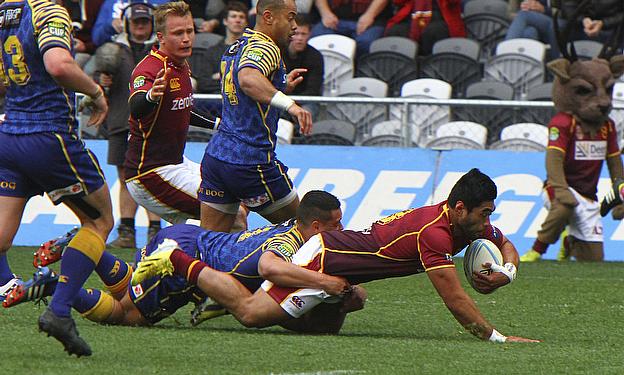 Melbourne Rebels Team Up with Mission Australia
Super 15 Rugby To Become Super 18 Rugby In 2016?
Super Rugby 2013 - Player Of The Competition

With the 2014 Super Rugby Squads beginning to take shape and not long until they are all fully announced, Talking Rugby Union wanted to focus on potential ‘big name’ signings around the league.

All Black centre and all-round man of the moment, Sonny Bill Williams has reportedly signed for the Chiefs, but rumour has it that the talented Ihaia West – who has been a star for Hawke’s Bay in the ITM Cup this year – has signed for the Melbourne Rebels.

With the rumours surrounding Sonny Bill looking ever-more concrete, we wanted to look at the reasons why Ihaia West looks to have signed for the Rebels.

1) The Melbourne Rebels has been given heaps of money from the Australian Rugby Union to pay for players in order to make them competitive.

2) There is a shortage of depth in the Rebels and Australia in some positions, especially at first five eighth.

3) West's Hawke's Bay team mate, like Telusa Veainu has signed with the Rebels along with Tamati Ellison from the Highlanders and Jason Woodward from Wellington. Ged Robinson from Hawke's Bay has also been playing with the Rebels over the past few seasons. There are several other players from teams like Hawke's Bay who have decided to go to Australia since they can't get contracts in New Zealand.

4) The Melbourne Rebels have lost their star duo of Kurtley Beale and James O'Connor. It makes sense for West to head for the Rebels because the Melbourne based franchise and Australian rugby in general is lacking depth in certain positions and the first five eighth is one of them.

5) The Hurricanes tend to snub players from Hawke's Bay, Manawatu and Taranaki. That is why Taranaki seems to have a relationship with the Chiefs and why Manawatu had plenty of players at the Highlanders. It seems stupid given the quality of players the Hurricanes let go.

6) The Hurricanes have signed Tasman first five eighth Marty Banks. This means that most New Zealand franchises are full. The Highlanders look likely to sign the steady but experienced Willie Ripia. West's best chance to stay in New Zealand is with the Chiefs behind Aaron Cruden or the Blues.

Although West could well end up leaving New Zealand, he would be certain to get much more game time in Melbourne, rather than ‘riding the pine’ behind the more experienced Beaduen Barrett or Aaron Crueden.

The league already has a number of big name movements. With talismanic All Black centre Ma’a Nonu moving to the Blues for the 2014 season.

Although Nonu is an ever-present fixture in the All Blacks jersey, who has chopped and changed around Super Rugby for the last few years. We have seen him travel from the Hurricanes to the Blues to the Highlanders and now back to the Blues.

Will Nonu be able to excel in a Blues jersey as he does in a Black one?

It is well known around the globe that the centre is one of the best international players in the world, but this is for the All Blacks, when he’s surrounded by world class players. Recent seasons in Super Rugby, however, have not lived up to this international prowess. Will the 2014 season by any different?

On the other hand, the Highlanders have lost their two best props, but recruited an Argentina front rower, but Jamie Mackintosh gets the best deal, as he is likely to get more time for the top ranking Chiefs team instead of warming the bench for the Highlanders.

It is going to be interesting to see the final New Zealand Super Rugby 2014 squads when they are announced in a few weeks.

Scotty believes that there will still be a number of signings to filter through before the full squads are announced. He also added that “there is heaps of depth in some positions like first five eighth, halfback, fullback, wing, blindside and openside flankers and props but New Zealand seems to be lacking quality centres, Number Eights and hookers.”

Who else will be on the list of Super Rugby movements before the 2014 season?