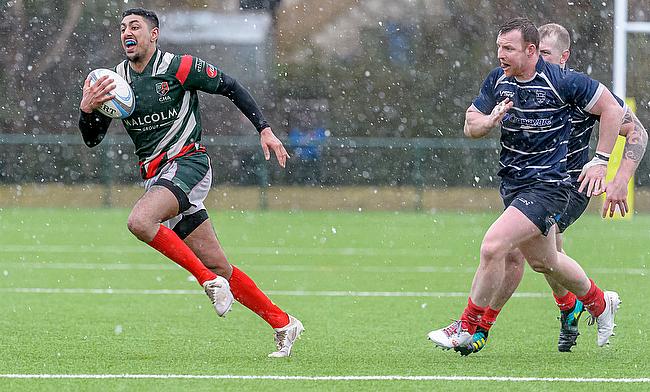 Exclusive: George Oram – ‘Teams are surviving on their bones’
Exclusive: Robin Copeland on why the Championship was vital to his career
Robbins finds balance is key as he looks forward to the future
Richmond hope to maintain their lead, Fylde look to stay second and up for grabs in the South

Lockdown and the subsequent phases have been tough for many young rugby players, but Aaron Purewal turned the ‘downtime’ into a positive.

The 22-year-old winger from Glasgow, who previously represented Scotland under-19s, has trained harder and run further than ever before since late March and it has paid off because he has been handed the opportunity to prove himself with Richmond in 2020/21.

“I have been working hard in recent months to make myself the best athlete I can be,” Purewal, who turned out for GHA in the Tennent’s Premiership in 2019/20, told TRU.

“Along with my coach Dru Nicholson, I have really put in the yards and pushed myself, we have been training up to five times a week and we have done a lot of work specific to my position on the wing - and it has worked because I feel in great shape right now.

“I guess I see myself as a late developer, but I believe in my ability so earlier this year I sent a highlights reel video to a number of clubs.

Return of The Mond ??

Great to see both our Richmond Men's + Women's sections back training at the @RichmondAth under the new RFU's Stage C guidelines!

My parents and my girlfriend Megan have been great supporters of mine in recent years and they gave me the final push I needed to send the video out.

“I was really happy when I heard back from Richmond director of rugby Steve Hill and he was keen for me to head down south and give things a go at the club.

“It will be a step up for me because they have a lot of experienced players in the playing pool, but I will just try and learn from them and I hope to make my mark for a club that has just gone up from National One to the Championship.

“I also want to make my parents proud. They have always been there for me and always told me to aim high and I really wanted to give this rugby opportunity a go, these types of chances don’t come around all the time.”

“I just fell in love with rugby - it gave me a chance to burn off a lot of energy!”

Purewal’s rugby journey began at Hutchesons’ Grammar School in Glasgow.His year group began to play the sport in Primary 6 and he was hooked right away.

“It was such a fun game and getting to train and play matches regularly each week with my best mates made rugby appealing,” he explained.

“I just fell in love with it and I couldn’t get enough so I asked my parents soon after if I could join a club and play club and school rugby.

“The club I joined was West of Scotland and, at that stage, it meant that I had rugby training on Monday’s, Tuesday’s, Wednesday’s and Thursday’s and matches on Saturday’s and Sunday’s - it gave me a chance to burn off a lot of energy!”

Purewal managed to get his foot in the door of regional rugby and began to play for Glasgow and The West through all of the different age-grades.

He learnt a lot at that level about his own game and what he needed to do to keep progressing because he was playing with and against some quality players as things moved forward including current Scotland caps Matt Fagerson and Darcy Graham.

“I went to a Spanish summer camp with the Scotland under-17s and that was a great experience,” Purewal recounts. “We were able to spend a lot of time on strength and conditioning and skills.

“That camp and playing against and mixing with guys who you knew were going to go to the top, left me hungry for more and I have always looked to better myself.

After three years in the Hutchesons’ first XV, Purewal left school in 2016 and felt in a good place with his rugby because of what he had learnt from coach Craig Sorbie.

“I owe a lot to Craig, he worked hard with me on my skills while he gave me the confidence to not be afraid to try things out on the pitch and we still keep in touch now,” Purewal said.

“After school I moved to Edinburgh to study for a Journalism degree at Edinburgh Napier University and so I joined Boroughmuir. They were in the Tennent’s Premiership at the time and were coached by [former Scotland and British & Irish Lions prop] Peter Wright.

“He is an ‘old school’ coach who works you very hard, but he is a great guy who gave me my opportunity in rugby and for that, I will always be grateful while I enjoyed learning from the likes of [Scotland Club XV winger] Jordan Edmunds.”

While he was with the Meggetland outfit, Purewal suffered a bad injury. In April 2017,he was delighted to be picked to play at the Melrose Sevens, but was hit by a knee setback.

“I was out for 10 months and It took me a while to get my confidence back after the injury,” he stated. “It took me time to get back to training at a high intensity, but the folk at Boroughmuir really helped me during that time.

“I was still based in Edinburgh for uni, but at the time [midway through the 2018/19 season] I felt like I needed regular rugby and to be back at home in Glasgow at times, so I joined GHA.

“When I first joined GHA, coach Euan Clark was there and he really helped me continue to get over the memories of the injury and regain my confidence out on the pitch and last season in 2019/20, I managed to play quite a bit for the first XV in the Tennent’s Premiership before the pandemic came.”

Currently Purewal, who graduated from university this summer, is training with the aforementioned Nicolson and with old club West of Scotland under the watchful eye of Andrew Douglas and he hopes to head down to Richmond in September.