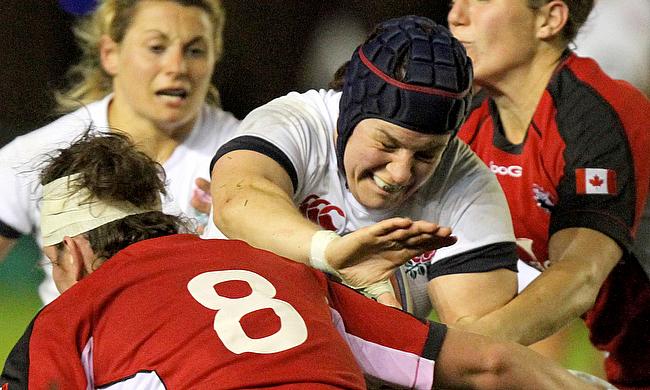 World Cup winner Claire Purdy is confident that England can retain their title at this year’s tournament in Ireland.

Purdy was part of the England side that lifted the World Cup three years ago in France after they beat Canada in the final.

Now, this current crop of England players will bid to become back to back World Champions when the competition gets underway in two weeks’ time.

“There is no doubting that England’s pool is tough” Purdy told TRU. “But am I confident we can achieve success in Ireland? Yes, of course I am.

“England begin the tournament against Spain which will be tough and we also face Italy and America. We played Italy in the Six Nations and they put us under a lot of pressure and we know the USA will be a battle.

“You do still have to be weary of everyone else like Australia, Canada Ireland etc, but I think going out to New Zealand last month was the biggest test and the best test England could have had before coming into such a massive World Cup. They will take big confidence from those results.”

Purdy was involved in the last two World Cup campaigns before retiring from international rugby in October 2014.

The forward, who played 43 times for England, lined up alongside the likes of Rochelle Clarke and Danielle Waterman three years ago as the side created history.

The aforementioned women have both been included in their fourth World Cup as have players such as Rachael Burford and Tamara Taylor.

Purdy believes balance in the squad is key

Purdy stated she was confident that England can go all the way next month and added: “I think there is obviously a lot of experience in the side, but you have also got some good young guns coming through.

“I think they showed their worth especially in the Tests they had over in New Zealand so it is an exciting squad.

“The experienced players will have a massive impact in terms of their ability to see things before others which they can relate back to. They will know how to handle certain situations.

"If you look at 2010, we took a lot from that and learnt from it ahead of 2014 because of the failure we had four years previous. We were able to share those experiences with the girls coming through which is so important.

“England don’t win all the time and you have to learn from those losses so they will have a lot in their back pocket to share with this current group of players.”

England were guided to glory by Gary Street three years ago and are now under the stewardship of Simon Middleton who is coaching the Sevens team and he also headed up the Team GB side at the Olympics last summer.

Middleton and his side will be working towards August 9th when they begin their tournament in Dublin, but the players now know that they will not have their XVs contracts renewed, regardless of their performance in Ireland.

The RFU says they will turn their attention to the Sevens game after this year's World Cup and new XVs contracts will be awarded before the next World Cup in four years’ time.

Speaking about the decision Purdy added: “It is a dream to be a full time rugby player.

“I think Nigel Melville’s comment regarding employment and that some of the team work for the RFU so they will have a job to go back to, is a weak response. What about the others!?

“However, Nigel refers to the ‘bigger picture’ and the further investment.  I also think Tamara Taylor's quotes on the The Telegraph website are the best on this point. There are a lot of strong opinions and it has everyone talking about women’s rugby."