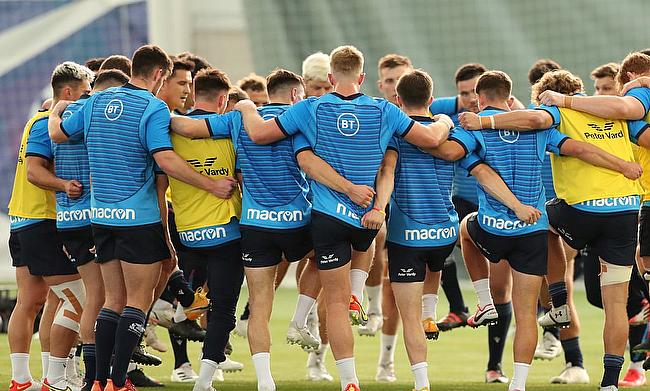 Looking back on 2021 in its entirety, Scotland supporters have to be, in the main, very happy.

Wins away to England and France in the Six Nations were added to by a home victory over Italy. Autumn Nations Series successes then came against Tonga, Australia and Japan which means the Scots recorded six victories from their nine games in the calendar year to leave them in a healthy seventh place in the world rankings.

Yes, there is some thoughts of ‘what might have been’ from the defeats to Wales and Ireland in the Six Nations and to South Africa on November 13th, but there are lots of good things going on from Gregor Townsend’s charges.

It means they can head into 2022 in a confident mood, but whenever Scotland take a step forward in terms of performance, it seems so to do the other northern hemisphere big boys.

The action from the weekend just gone points to the fact that next year’s Six Nations is going to be a cracker and every rugby supporter north and south of the border now has February 5th circled on their calendars.

That is the day that Scotland take on England on the opening weekend of the showpiece tournament at BT Murrayfield and it should be a real litmus test to show just how far Townsend’s men have come in the last 12 months.

And the good thing from a supporters’ point of view is that skipper Stuart Hogg, and his head coach, know this side can still get a lot better.

Absolutely loved yesterday ??????????????. Very glad we won the game and know we will have to improve come the Six Nations. Thank you for all the kind messages #AsOne pic.twitter.com/hKgky0m24u

“We’re yet to find the complete 80-minute performance,” full-back Hogg said. "The key thing is we all learn individually and we all learn collectively and make sure we’re in a better position when we come back in for the Six Nations.

“Hopefully, we keep everybody fit and we keep challenging each other, but I’d love to see a complete 80-minute performance. I know it’s a massive ask but I wouldn’t ask for it if I didn’t believe we could do it. It’ll come.

“There are a few different combinations, I think 12 new guys have been capped for Scotland over the last four games which is incredible for us, so we’ll just keep plugging away and we’ll be in a good place.”

Townsend added: “We are doing well, but we will keep building. What pleased me most during the Autumn was the reaction of players when they’ve been given opportunities. Players look like they’ve grown when they’ve put a Scotland jersey on.

“Right from the Tonga game, when it was Luke Crosbie, Jamie Hodgson, Rufus McLean and others who played that day, right through to the guys coming off the bench against Japan, it’s really pleasing that the environment they come into, the Test-match arena, brings the best out of them.

“We’ve shown that we still have the ability to score tries out of nothing, in the South Africa game and Tonga games in particular.

“But we’ve also developed the power side of our game. We didn’t show it enough against South Africa, but against Japan, our scrum and maul were very good. Our work at the breakdown was also very good against Japan.”

Ahead of the Six Nations, here are five things on the minds of Scottish rugby fans:

Penalty count: As acknowledged by Townsend, this was just too high during the Autumn Nations Series in the big games.

Scotland did not manage to get on the good side of the referees or adapt to their interpretation of things - except for perhaps against Australia - and it is something Steve Tandy and the likes of defensive leaders Jamie Ritchie and Chris Harris will be looking at closely ahead of February 5th.

No.8: Matt Fagerson has done a great job in the No.8 jersey over the last couple of years while at times, Nick Haining has filled that shirt. Against Japan, Josh Bayliss was picked there in his first-ever international start.

Fagerson looks like being the man in possession of the jersey heading into the England game in February and he has some credit in the bank, but do some Scotland supporters feel the team needs a more physical, abrasive carrier in that slot?

Like Fagerson, Bayliss has good feet and is useful in the wide channels, but if you want to carry hard in the midfield, Haining would be the man. The issue is he was picked at six versus South Africa and that experiment did not work while he hardly ever starts for Edinburgh with Fijian Bill Mata in his way.

With Jamie Ritchie at six and Hamish Watson at seven, Scotland just need a No.8 to complete a world-class back-row. Certainly something Townsend will want to nail down sooner rather than later.

Strength in numbers: Townsend hoped that a clutch of new caps would get their bow in the summer against Romania and Georgia, but when those games were postponed, it put a flurry of debuts on hold.

However, in the last month he has managed to cap 12 new players including the likes of Pierre Schoeman, Ewan Ashman, Sione Tuipulotu, Rufus McLean and Javan Sebastian - and that is good as, in the modern game, a wider squad is definitely needed in the Six Nations.

On his debut against Japan at the weekend, Sebastian said: “I touched base with Gregor Townsend just before the summer, he called me out of the blue. I had no idea he had been looking at me so it was a massive surprise. He said he was impressed with what I’d been doing. It was great that he was watching me  - now I want to build from here now.”

?? Highlights of this afternoon's 29-20 win over Japan at @BTMurrayfield, which was live on @primevideosport in the UK. pic.twitter.com/UG9eD3iyGG

With Rory Sutherland injured and WP Nel now 35, it would still be beneficial to have a bit more strength in depth at loosehead and tighthead so Sebastian's introduction to the international scene might be timely whilst young Glasgow Warriors back-row Rory Darge would have been capped by now were it not for injury.

Back three: AB Zondagh only joined the coaching staff as attack coach before the Autumn, but there were some good signs.

In the Japan game, all back three members - Stuart Hogg, Duhan van der Merwe and Darcy Graham - scored tries while Rufus McLean and Kyle Steyn helped themselves to a barrowload of scores against Tonga and Sean Maitland could yet earn a recall.

As a result, the Scots know if they can get the ball wide, they can cause teams problems in the Six Nations and they have to keep working to get van der Merwe involved as often as possible, wherever it might be on the field, because he attracts defenders and creates space.

Injured troops: Key men Rory Sutherland, Fraser Brown and Jonny Gray missed the whole of the Autumn through injury and Townsend will want them fit and back firing in time for the Six Nations.

As much as Scotland’s depth has grown, they still do not have the luxury to miss big players and this trio - along with Gray’s fellow second-row Scott Cummings who returned against Japan – fall into this category.

“Fraser Brown is looking at being back in the next few weeks. We had better news on him this week,” Townsend said after the Japan game.

“Jonny Gray will be back next week or the week after for Exeter and Scott Cummings came back against Japan and played really well, which was a bonus.”

The head coach did not mention Sutherland’s recovery timescales, but did say regarding centre Cameron Redpath, the Bath man who made his one and only appearance against England last year: “Cam Redpath is targeting the beginning of January, maybe before that because he feels he’s ahead of schedule.”

The next pieces of the puzzle will now be pulled together by Townsend before February 5th as a meeting with the auld enemy edges into view.