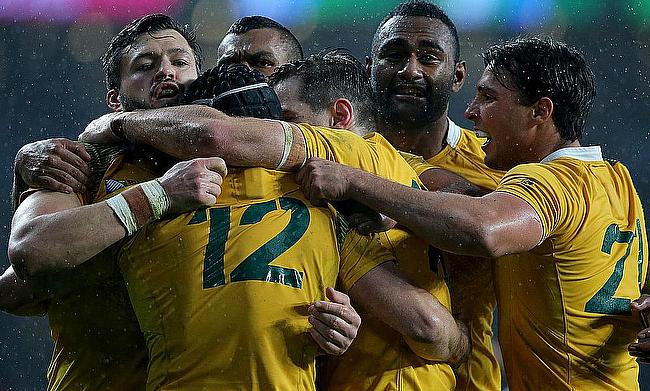 The timing of their visit to the UK seemed to be perfect.

As the Australian bid team for the 2027 World Cup were preparing to arrive on these shores, on the pitch, the Wallabies looked rejuvenated, but any momentum which was generated before the autumn is slowly trickling away.

“Do we have to talk about our results?” jokes former Wallaby Phil Kearns, who is heading up Australia’s bid for the World Cup in six years time.

Whilst the recent performances of Dave Rennie’s side won’t have any impact on whether the sport’s showpiece event will take place Down Under in 2027, the optimism which many Wallabies supporters would have felt leading into their northern hemisphere tour has undoubtedly faded into the background.

“Overall, the Australians won’t be happy. Their spring tour hangs in the balance,” adds Kearns.

The two-time World Cup winner isn’t wrong. Having slipped to defeats against Scotland and England, Rennie’s men conclude their end-of-year schedule with a clash against Six Nations champions Wales.

Here is a match report, as well as his thoughts following a comprehensive victory that sets the scene well for the Springboks test next week.https://t.co/mDBeotfqZn pic.twitter.com/JuqdR8C7Ii

A display marked by ill-discipline and inaccuracy at Twickenham only added to the disappointment the Wallabies felt after seeing their five-match winning run halted at Murrayfield, but Australia can leave Britain on high if they can get the better of Wayne Pivac’s side in Cardiff.

“It is really important for our team to come back with, at worst, a 50/50 tour,” Kearns says. “Two wins [ v Japan and possibly Wales] and two losses. To come back 1-3 would not be acceptable and most importantly, it would not be acceptable to them. For a bunch of reasons, I think it is a really, really important game. It is how you respond to that pressure.”

The Wallabies will certainly be searching for improvements this week, and top of the agenda should be reducing the number of penalties which they are conceding. After getting on the wrong side of referee Romain Poite against Scotland, Rennie’s men were pinged no less than 18 times by Jaco Peyper at Twickenham.

If you were to look at various decisions through Green and Gold tinted glasses - Wright’s high-tackle for example - you could argue Renne’s side have been unfortunate at times, and whilst Kearns was exasperated at some of the decisions which went against the Wallabies last weekend, he isn’t using it as an excuse for another below-par performance.

“The Tom Wright incident was nothing. I can understand if there is a swinging shoulder coming around with a clenched fist into someone’s head, but putting your hand on someone’s shoulder as they come down is a completely different story. I was sitting right near Martin Corry and he just tapped me on the shoulder and said, ‘That’s a joke,’ but I am not saying some of those decisions were the reason for Australia’s loss at all. We know that we need to improve.”

Ill-discipline has been a hindrance to Australia during this autumn, but Kearns was keen to point out that the Wallabies squad have been operating in a Covid-19 bubble since they first came together for their summer Tests against France: “When you are in a normal season, you will play a Test match and then you might be able to go home for a week and just refresh. It has just been constant for a lot of these guys so I think there is a number of factors which have contributed to recent results.”

Australia have also been without playmaker Quade Cooper, Samu Kerevi and Marika Koroibete throughout their visit to the UK. All three played significant roles for the Wallabies in their eye-catching sequence of wins against Argentina, and most notably world champions South Africa during The Rugby Championship.

“Not having Samu, Koroibete and Quade Cooper, I think has had an impact,” Kearns added. “I think that means it is very difficult both from a team harmony perspective, but for cohesion on the field. To bring Rory Arnold, Tolu Latu and Will Skelton in when they haven’t been part of the set-up for forever and expect them to perform isn’t easy. There are lots of excuses, but the main thing is we just haven’t been good enough.”

The Wallabies will also be without their talismanic captain Michael Hooper for this weekend’s clash with Wales after he was ruled out with a foot injury earlier this week.

Kearns admits the absence of their “spiritual soul of the side” will have a significant impact on Australia as they look to salvage something from their final fixture of 2021, but the former front-rower feels Rennie can use this as an opportunity to find alternative options if Hooper isn’t available.

This all forms part of Australia’s plans for France 2023 as they look to manoeuvre themselves into a position to challenge for the World Cup once again.

From a southern hemisphere perspective, only South Africa can end this autumn window with a 100 per cent record and Kearns feels there is work for the Wallabies to do if they are to reach the current levels of their northern counterparts.

“I include South Africa in this, we arrogantly think down south that we play pretty good rugby,” Kearns told TRU. “Certainly in Australia, we don’t get to see as much of the northern hemisphere rugby as others.

“We don’t get the Six Nations on free-to-air and in some cases, we don’t get it on pay-TV so it is hard for us to get a measure of how good UK rugby is a lot of the time. I think to add to that, you’re in the middle of your season so you have got players that are match fit and working hard. Because of the nature of our season, it has been intermittent and a really fractured season.

“I think for the southern hemisphere, it is a big wake-up call as to just how strong the north is.”

Whilst different factors may have attributed to Australia’s disappointing tour, that will come as little solace to Rennie’s side as the penultimate year before the next World Cup is just around the corner.

With this in mind, it is safe to say a victory over Wales would certainly stop all of the Wallabies’ optimism from trickling away and it could provide them with a platform to build on once again.

But it isn’t all doom and gloom for Australian Rugby this autumn. Kearns and his World Cup bidding team have had ‘really constructive’ meetings with World Rugby, the RFU, the SRU and the WRU after putting forward their proposal to host the tournament in 2027.

Kearns insists the country are “a safe pair of hands” and are ready to welcome the competition back to Australia for the first time since 2003: “There is still a little bit of comprise to go along the way, but I am sure we will get there.

“We are not arrogantly confident, but we are quietly confident that things are falling into place. We are very pleased with the liaison we have had with World Rugby in terms of the openness and transparency of the conversations that we have had and I know our government at home really appreciates those discussions. We are not 100 per cent of the way there, but we are not that far away.”

Wales boss Wayne Pivac stressed Jonathan Davies had not been dropped for their clash against the Wallabies.

Davies, who toured Australia with the British and Irish Lions in 2013, has been overlooked for this weekend with the less experienced Uilisi Halaholo and Nick Tompkins selected ahead of him.

“Jonathan hasn’t been dropped, but we want to have a look at Willis and also Josh Adams in midfield,” said Pivac.

“He’s the captain of this group, since Alun Wyn Jones left, and that doesn’t change just because he’s not playing. He has a big input off the field. He understands that we always put the team first. As much as he wants to play, he understands the reasoning.

“He knows that we’ve got a World Cup that we’re working back from and he’s desperate to play at that World Cup. He believes he’s got something to contribute, otherwise I believe he would retire.

“He’s hungry. He’s just as hungry as if he had one or two caps. He desperately wants to play for his country. He knows he’s got more to give.”

Wales are missing 16 players through injury for their final fixture of the Autumn Nations Series. Pivac’s side had suffered defeats against New Zealand and South Africa, before eventually getting past the 14-men of Fiji last weekend.

But despite the long list of absentees, the Wales head coach is looking at the situation in a positive light: “Some players have performed very well which has been a massive bonus for us because the flip side of having no injuries is those players wouldn’t have been exposed.

“Maybe closer to the World Cup and during the World Cup we then get exposed and you have inexperienced players there so it’s helping us with a view of players and potential squads going forward which has been fantastic.

“But it has changed slightly the direction of where we wanted to go with the side if we had a full squad available. It is similar to last autumn. We’ve learned a lot of lessons from that, but we just don’t want to have to keep learning lessons.

“When we look back in a couple of years’ time, we’ll see what the last two autumns have done and that’s given us a stronger squad to go into a World Cup year.”