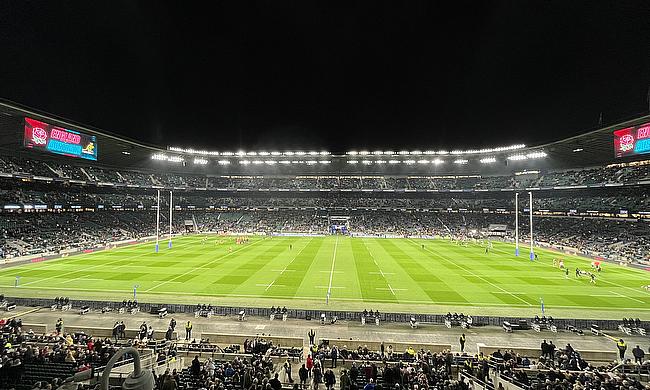 81,575 people made their way to Twickenham on Saturday evening to watch England beat Australia
©JH34M

A glimpse into the rise of 'athletic' Christ Tshiunza
England suffer another Covid-19 blow as Ellis Genge tests positive ahead of Australia game
“It feels like a dream”: Family members, Sandbach RUFC and Sandbach School react to Ashman’s Scotland debut
Sale Sharks in discussion with England fly-half George Ford

It was a fiery affair at Twickenham from start to finish as England went back into the sheds at full-time as the victors.

James O’Connor’s boot struck the first penalty over, a score wiped out minutes later thanks to the creative combination of Owen Farrell and Marcus Smith in the midfield sending Freddie Steward over for the game’s first try.

Farrell converted that score and would have his kicking tee out minutes later to extend England’s lead further.

Dave Rennie’ Wallabies were clearly keen not to let England get too far in front, taking the points when they were on offer once more, Farrell and O’Connor trading five kicks before the half was done, Tom Wright’s high tackle on Jamie George accounting for one of the three-pointers.

England started the second-half in very much the same way they had ended the first; dominantly.

Consistently Eddie Jones’ men were knocking on the door of the Australian try line, adding a further three points to their collection before the 50-minute mark.

Full time at Twickenham and England have beaten Australia to make it two from two in the @autumnnations ?? #ENGvAUS pic.twitter.com/5mthgQ1UBx

What hampered Australia was their discipline, Angus Bell sent to the bin for a tip tackle and Pete Samu’s high shot on Courtney Lawes prevented James O’Connor from reducing the deficit to one after Jaco Peyper had originally pinged Lawes for holding onto the ball too long.

Their rewards would continue to come, Farrell adding another three points to his collection with just over 15 minutes on the clock.

England’s only concern will be the injury that forced Farrell off with 12 minutes left to play, the captain seemingly suffering a lower leg injury in contact.

Marcus Smith got off the mark to take the game beyond the visitors, striking a penalty through the uprights to take the score to 25-15.

The Harlequins fly-half had the kicking tee out again to close out the game, converting Jamie Blamire’s score whilst the clock was in the red.

It was a score created by Sam Simmonds, the No. 8 making his first England appearance since 2018, breaking down the wing before finding the Newcastle man.

“We had to battle today, and I was really pleased with the attitude of the players,” said Jones.

“We thought it was going to be a more free-flowing game, how Australia usually like to play, but it turned out to be a heavy penalty game with a lot of set piece contests and kicking.”

England made relatively light work of Australia by the time Jaco Peyper blew the final whistle at Twickenham on Saturday evening.

The stage was set with a fireworks display that lit up the West London sky, Australia taking an early advantage to suit that entrance to proceedings.

Five penalties from James O'Connor would be all that Dave Rennie's side could muster across the 80 minutes, their loss against Scotland last weekend apparently more than the estimated blip.

Failing to gather front-foot ball, this cobbled together Australia pack which was far from the bedrock of their impressive Rugby Championship campaign, failing to gain dominance against England.

On Thursday afternoon, many were surprised by Eddie Jones naming Manu Tuilagi on the wing. It was the first time he had played in the position since the 2014 tour of New Zealand, but quickly it became clear that the centre wouldn't be straddling the touchline.

Instead he drifted into the midfield, as Henry Slade patrolled the backline and Freddie Steward stood on the wing. It is difficult to know exactly what Jones was looking to achieve with the selection, especially when considering during the game it was blatantly clear that the 30-year-old was nowehere near the position his shirt designated him to.

We all know that Jones is not unaccustomed to mind games, so naming Tuilagi on the wing was nothing more than that. A ruffling of the feathers that kept the Wallabies guessing from start to finish.

The danger of Marcus Smith was also on Australia's minds. Every time that the 22-year-old touched the ball, there was an avalanche of gold chasing after the Quin. Particularly seen in Hunter Paisami's attempt at landing a big hit on the fly-half, an attempt that left the Melbourne Rebels midfielder requiring medical attention.

Yet another positive was that Bevan Rodd stood up to the challenge of Test rugby at short-notice. Of course, the argument can be made that James Slipper's inexperience on the tighthead maybe levelling the field somewhat, but other than scrummaging there was much to like from 21-year-old, whether that be in defence or in attack.

“Bevan Rodd, to make his debut against a guy who has 113 caps and play 65 minutes, is a remarkable effort from a young man,” said Jones. “He is a young prop, only had one training run and I think he adapted well."