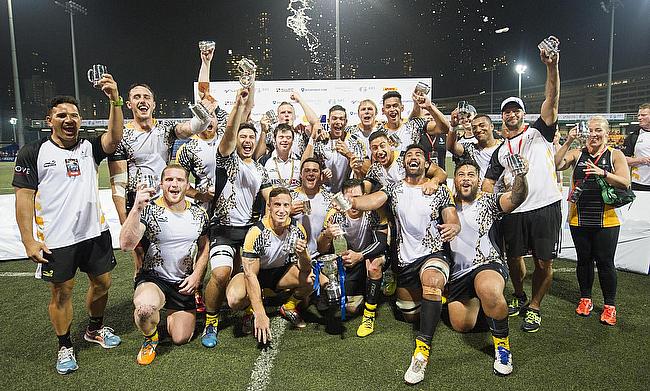 Hong Kong; April 7, 2016: Penguins beat Samurai 5-0 with a try in the second period of extra-time to win one of the most physically draining Cup finals ever seen at the GFI HKFC 10s.

After over 30 minutes of scoreless 10-a-side action, Waikato flanker Josh Tyrell picked up a loose ball following a lineout near the Samurai line and powered over in the second five-minute period of extra-time, following two 12-minute halves where both teams cancelled each other out.

In a rematch of the 2013 final that Penguins won with a late end-to-end try at Hong Kong Football Club, the historic UK-based touring club prevailed again and prolonged the heartbreak for Samurai, who have now lost in three finals in 10 appearances at the GFI HKFC 10s.

Scott Waldrom, who was capped by the All Blacks, co-coached the third seeds with long-time Penguin playmaker Willie Walker, who moved into a coaching role after competing in last year’s GFI HKFC 10s.

“I’m just really proud of the boys,” Waldrom said. “We went from one metre from our own goal line to come all the way down the other end to score in some pretty tough conditions. There will be some pretty tired boys out there.

“It was such a stalemate because you had two very similar teams. We both had some good front-rowers, some solid locks and some good bench, so it was much of a much and that’s probably why the game went on so long.”

Walker added: “Antonio [Kiri Kiri], our captain, came off and said that was the hardest game he had ever played, with two extra-times, and he’s probably right. We had 14 players after we lost a couple. They also lost a couple. Both teams were battling out there and it was a good, tough final.”

Antonio Kiri Kiri, a contracted New Zealand Sevens player, co-captained the Penguins with former All Blacks Sevens player Kylem O’Donnell and admitted he was physically and emotionally drained after a final that left most players on their knees.

“I’m pretty blown away. I’m a bit lost for words. It was one of those games where it was down to who would be the first to make a mistake and they lost their own line-out. I’m just happy it wasn’t us,” said Kiri Kiri, who made his Sevens World Series debut in South Africa last December.

“I’ve never played a game like that before, a double extra-time. I’m not used to that. I’m buggered. It has been a tough two days, but I’m sure I’ll find some energy later on. The co-captains and co-coaches seemed to work. Kylem’s an outstanding player and was a real leader on the pitch.”

Kiri Kiri agreed with Waldrom that the two teams were evenly matched in many ways. “The Samurai boys matched us physically and we felt it out there. We’ve sort of had our way with other teams, but with them, they gave it back. Hats off to those guys. They were pretty outstanding athletes.”

Make-A-Wish Hong Kong was this year’s official charity and received a cheque for HK$106,080 from Lisa Foley, Chairman of the HKFC 10s Organising Committee.